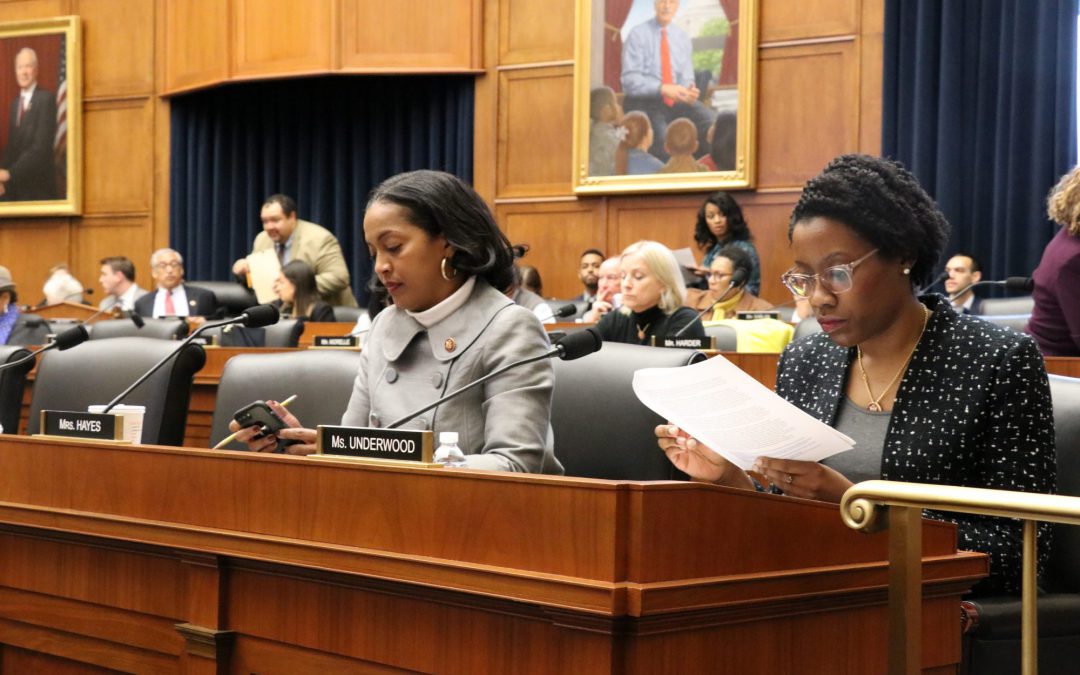 Rep. Jahana Hayes, D-Conn., a former state and National Teacher of the Year, and Rep. Lauren Underwood, D-Ill., prepare before the House Education and Labor Committee hearing on public school funding. Hayes said if lawmakers respect teachers and public education, they should look at funding it as an investment. (Samantha Handler/MNS)

WASHINGTON – As teachers from Los Angeles to West Virginia have gone on strike to demand more pay and funding for their schools, House Education and Labor Committee Democrats on Tuesday urged passage of their $100 billion plan to improve public school infrastructure.

A 2016 State of our Schools report from the Center for Green Schools, 21st Century School Fund and the National Council on School Facilities found that, on average, public schools are underfunded by $46 billion compared to best-practice standards.

The underfunding of public school infrastructure has led to mold outbreaks, lack of heating or air conditioning, leaking ceilings and contaminated water, said American Federation of Teachers President Randi Weingarten. She said that on average teachers pay around $500 out of pocket for classroom materials and may “forsake their own salaries” to provide for their students.

“We send our children to schools in these conditions, and we expect them to thrive,” Weingarten said. “Our children deserve better”

Scott called for fully funding Title I of the Elementary and Secondary Education Act, which supports public schools with large numbers of students living in poverty, as well as the Individuals with Disabilities Act, which gives grants to offset costs of the supporting students with disabilities.

He added that his bill — the Rebuild America Schools Act, which he introduced on Jan. 30 — would provide $100 billion to improve the digital and physical infrastructure of schools in low-income communities.

“The combination of chronic federal and state underfunding in public education has left many
schools at a literal breaking point,” Scott said. “This should be a bipartisan effort.”

Foxx said the best solutions for these issues come from local communities and that the Democrats’ plans for “more money, more bureaucracy” have not properly addressed teacher pay and school infrastructure.

Foxx urged consideration of plans that would spur the private sector to invest in impoverished communities to generate more local funding.

“When it comes to these two issues — teacher pay and school construction — Democrats have not had a new idea in decades,” Foxx said.

According to the National Center for Education Statistics, public school spending per student increased by 37 percent between 1992 and 2016, though teacher salaries declined by around 1 percent.

Ben Scafidi, director of the education economics center at Kennesaw State University in Georgia, said the spending increase went to an increase in staff and not teacher salaries. He said a better alternative is giving families the option to enroll their students in charter and private schools.

Democrats said the staff increases went to essential school personnel, such as nurses, librarians, guidance counselors and bus drivers, which Scafidi said are necessary in schools.

“Literally decades of history tells us that there will be significant increases in the employment of all other staff, stagnant teacher salaries and stagnant outcomes for American students,” Scafidi said.

Republicans said the committee must look at the quality of education that students are receiving due to the current spending levels.

Rep. Jahana Hayes, D-Conn., said she agrees with Republicans that lawmakers must look to local communities and schools for solutions but said Congressional funding for public education is an important investment.

“We are thinking that it’s one or the other: pay teachers or improve facilities,” Hayes said. “I want both. It’s not a tradeoff.”