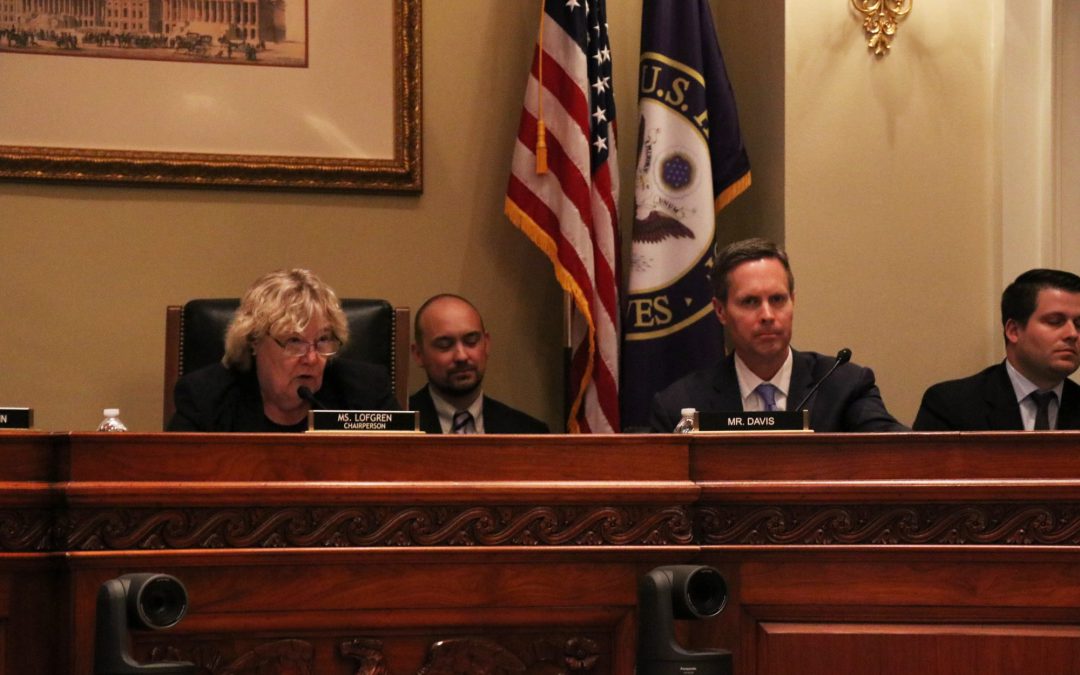 Chairwoman of the House Administration Committee Zoe Lofgren, D-Calif., and ranking member Rodney Davis, R-Ill., at a hearing on Thursday. The committee discussed H.R.1, the For the People Act. (Samantha Handler/MNS)

WASHINGTON — Democrats and Republicans continued to spar over election reform at the final hearing Thursday for an extensive Democrat-backed bill that targets voting, money in politics, redistricting and ethics.

The For the People Act, also known as H.R.1, provides sweeping election reform, including automatic voter registration, a national holiday for Election Day and the restoration of key anti-discrimination provisions of the Voting Rights Act, which the Supreme Court overturned in 2013.

The bill also tackles campaign finance reform by adding disclosure requirements and a government-matching program for House candidates who pledge to only accept small-donor contributions.

California Democrat Zoe Lofgren, the chairwoman of the House Administration Committee, said the bill would “restore our democratic promise” by addressing barriers to participating in elections, whether by voting or by running.

“Trust in government is at a low point,” Lofgren said. “We have many challenges that we have to work on together.”

Wendy Weiser, the director of the Democracy Program at the Brennan Center for Justice, said several of the bill’s provisions will “strengthen democracy.” She emphasized the importance of restoring the full Voting Rights Act protections before the next redistricting cycle in 2021 and said automatic voter registration would be “transformative.”

“Perhaps more than ever Americans understand the problems facing our democracy today,” Weiser said. “They are hungry for bold action.”

Ranking member Rodney Davis, R-Ill., said the 571-page bill is “egregious,” and singled out sections on campaign finance reform, including a proposed government-matching program that he said would deny taxpayers the right to determine which candidate they are financially supporting.

“It’s just a Constitutional overreach and places limits on free speech protected by the First Amendment and violates the separation of powers,” Davis said, noting that he would not back the measure in its current form.

Institute of Free Speech President David Keating said some parts of the bill violate the First Amendment by making it more difficult for groups to speak out against the federal government.

He said the campaign finance provisions that add public disclosure requirements would make some of the disclosures longer than the advertisements and “hurt” small groups that cannot afford extra airtime.

Rep. Marcia Fudge, D-Ohio, said while she agreed with Keating who said H.R.1’s disclosure provisions would be burdensome for nonprofits and small organizations, she said the most important effect of the bill is preventing disenfranchisement.

“What we ought to be doing is trying to figure out how we engage every single person in this country to exercise their right to speak,” Fudge said. “Everyone is guaranteed an unfettered right to vote and that is what we hope to come out of this.”

Washington Secretary of State Kim Wyman said the act is a “good start” but takes too much power away from the states. She cautioned that this bill, in its current form, could increase the cost of elections and “stifle” the progress that states like Washington, which uses an all-mail ballot system, have already made.

Wyman said she wants to work with Congress and local officials to produce a bipartisan bill that strengthens elections.

“The greatest strength is our decentralized nature,” Wyman said. “The greatest threat to our election system is partisanship.”

The committee is expected to vote on the measure next month. House Speaker Nancy Pelosi is one of the 227 Democratic co-sponsors of the bill, which will likely pass the House but die in the Republican-controlled Senate.