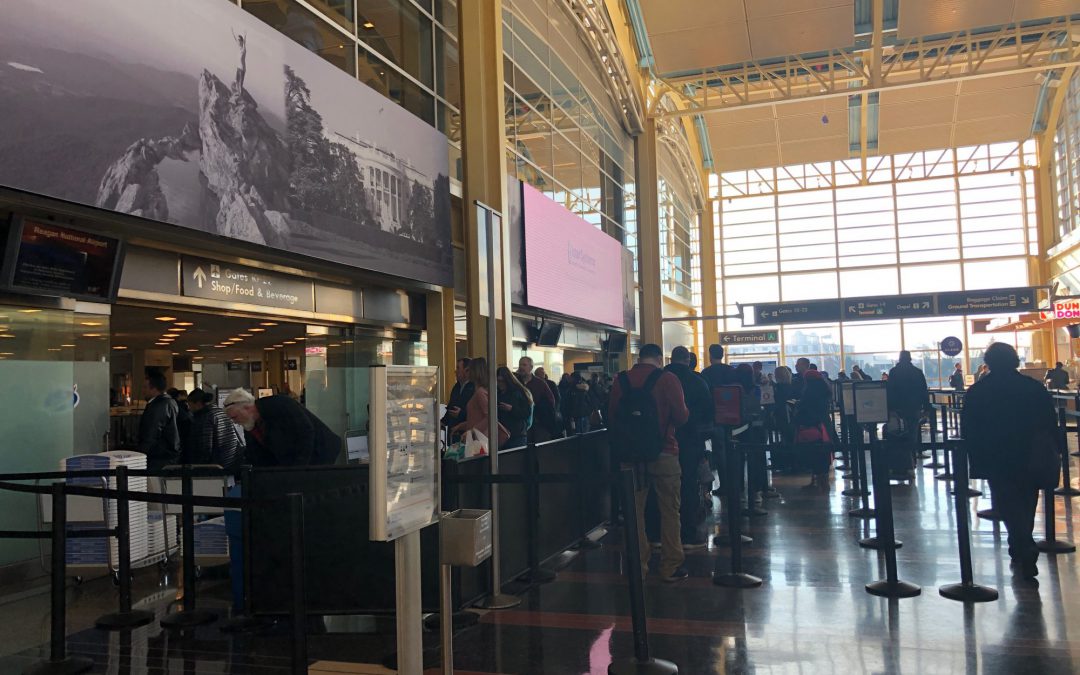 WASHINGTON — During the recent 35-day partial government shutdown, 22 airports operated at full strength — those that use private security agencies instead of Transportation Safety Administration employees.

The federal program that allows them to choose private screeners instead of TSA workers — called the Screening Partnership Program — hasn’t admitted new airports since 2016, but it has been getting renewed attention in recent weeks as SPP employees continued to receive pay during the shutdown while many TSA officers called in sick to work.

During the shutdown, unscheduled absences by TSA workers more than doubled — from a normal rate of 3 percent to around 7 percent on some days  — and at one point more than tripled. Many employees cited financial concerns as the reason they are unable to work, according to TSA press releases. The average TSA worker is paid $16 per hour.

These callouts caused delays and increased wait times for passengers, especially in places like Atlanta, New York, and New Jersey.

To combat the problem, conservative experts and officials have suggested making it easier for airports to hire private security by removing some of the legislative barriers which make it difficult to opt out of TSA security.

David Inserra, a policy analyst for the conservative Heritage Foundation’s Davis Institute for National Security and Foreign Policy, said it can be quite difficult for an airport to transition to private security screeners due to bureaucratic restrictions. During the Obama administration, he said, TSA approved very few new applications for SPP.

“It’s generally fairly cumbersome, and even when an airport does opt out, it’s still micromanaged by the TSA,” he said.

When Congress created the TSA in the months after 9/11, SPP was included as a political compromise to win Republicans, according to Jeff Davis, a senior fellow at the Eno Center for Transportation. Previously, aviation security was entirely private.

A Government Accountability Office report written in the immediate aftermath of 9/11 outlined weaknesses in private security — such as poor safeguards for secure areas, the inability of screeners to accurately detect threatening objects and inadequate training of screeners — that led to putting TSA screeners in airports. Davis pointed to this report as evidence against the effectiveness of private aviation security.

However Inserra is an advocate for privatization of aviation security, as well as the author of a 2017 Heritage Foundation report on the benefits of privatizing the TSA. Canada and the majority of European countries use this model, he said, and spend about 40 percent less per capita on aviation security than the U.S.

He noted that private security companies have to abide by the rules of the TSA, as well as use TSA-approved equipment.

Inserra said privatizing airport security would allow the government to focus on oversight instead of labor management, something he believes the private sector can handle better. He also said using private employees would avoid delays caused by a lack of pay to TSA agents during shutdowns.

TSA spokesman Tom Kelly said security checkpoint closures are “somewhat normal operating procedure” for a long shutdown and airports used contingency plans that had been used before. In the case of a lane closure at BWI Airport, Kelly said, it was not just unscheduled absences that lead to the closure — there were also few passengers and bad weather.

“This is what they would have done in the past,” Kelly said. “When they see low passenger volume, they will consolidate the workforce…and shift their resources somewhere else.”

Despite the differences between SPP and TSA screeners during government shutdowns, it is unclear how TSA and SPP screeners compare during regular security checks. In 2012, the GAO issued another report that outlined the need to test both TSA and SPP security screeners to determine if there were differences in levels of security and efficiency.

After this report was issued, Rep. Bennie Thompson, D-Miss., now the chairman of the Committee on Homeland Security, asked the TSA to stop adding airports to the list of those that could use private security screeners until accurate tests could be created.

“This report reveals that some privatized airports do not perform passenger screening as well as their federalized counterparts,”  Thompson said at the time. “It also reveals that TSA does not have the proper controls in place to regularly monitor private screener performance and does not validate data on attrition, absenteeism, and injury rates for privatized screeners.”

In a statement, the TSA said it has completed four private studies of the SPP program since its inception in 2001. Two were completed after the 2012 GAO report was issued. The results of these reports cannot be released publicly, it said, because they contain “sensitive security information.”

“However, the reports confirmed that the performance of federal and contract screeners is comparable,” the statement said.

The TSA has approved more airports for private screeners in the years since 2012.

Louisiana Rep. Garret Graves, the top Republican on Homeland Security’s aviation subcommittee, said that TSA has functioned relatively well, but has not maintained the same standards in all areas of the country.

Graves said the private sector could improve on the work that TSA agents do. But the government, he said, does not have as much of an incentive to improve.

“One of the biggest problems with government …is that government often has a monopoly on the work that they do,” Graves said. “This, in my opinion, stymies innovation and efficiency.”

Graves said he didn’t want to make any “rash” decisions about privatizing the TSA completely, but would support a more easily accessible SPP.

“The reality is that (SPP) might not be the right model for all airports but it might be the model for some,” he said.

It is unclear if legislative action will be taken to make it easier for airports to hire private security firms instead of the TSA.

One of the largest airports utilizing SPP is San Francisco International Airport. Spokesman Doug Yakel said San Francisco was one of the original six airports to launch this program in 2005 and has found it successful.

The airport’s security is in frequent contact with the TSA — Yakel said the airport has weekly meetings with TSA staff in addition to employing TSA managers and inspectors.

Though he noted private aviation security and TSA face similar issues of matching passenger volume to level of staffing, Yakel said this collaborative aspect of SPP is helpful to the airport.