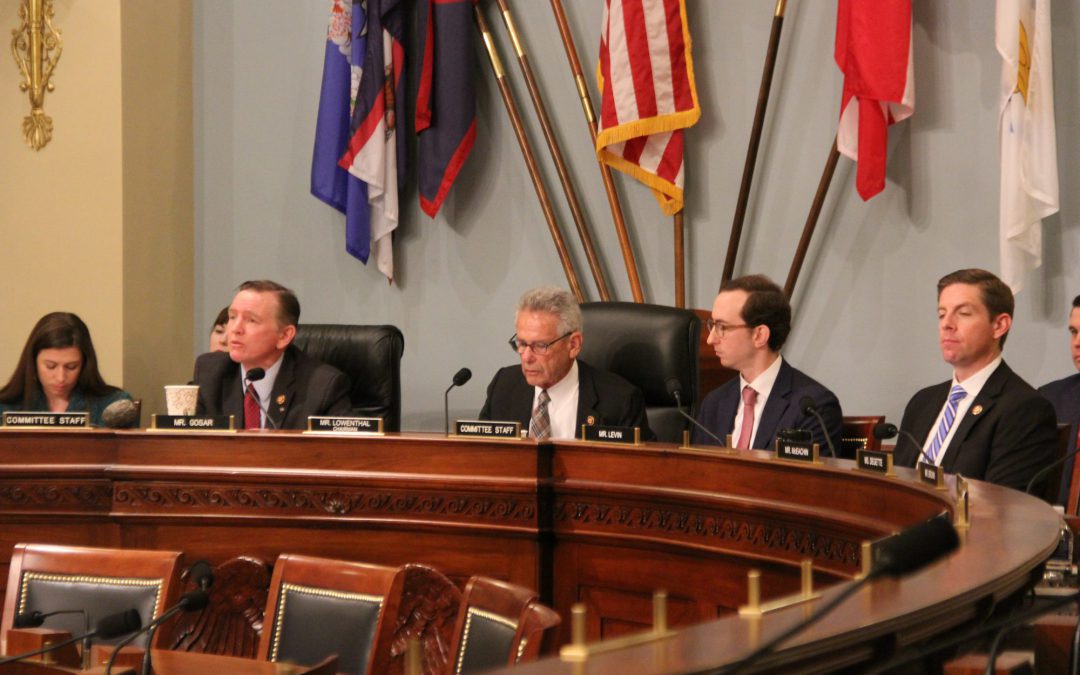 Top Republican on the subcommittee Paul Gosar, R-Ariz., questions a witness on the effects of addressing climate change. (Cameron Peters/MNS)

WASHINGTON — Transitioning to a clean energy economy is more than just a necessary step to address climate change, Just Energy Director Chandra Farley told lawmakers on Tuesday. According to Farley, it also offers an opportunity to address issues of racial injustice, economic disinvestment and other equity issues.

Topics of equity and human impact were in the spotlight at the first House Energy and Mineral Resources subcommittee hearing Tuesday, which discussed both the benefits and the pitfalls of a transition to clean energy in response to climate change.

Farley pointed to the increased health risks associated with proximity to coal-fueled power plants as an example of the structural racism of current U.S. energy infrastructure. Nearly 70 percent of black Americans live within 30 miles of such power plants, she said, and because of the disproportionate effect of these emissions, questions of racial justice must be at forefront of the energy transition.

Other witnesses, including business leaders and academics, underscored the importance of addressing climate change in a way that assists local economies.

Sarah Shrader, the co-founder of Bonsai Design, an outdoor recreation and adventure company in Mesa County, Colorado, said the area has historically felt the burden of extracting natural resources from the land. When commodity prices are high, she said, the development has provided jobs and prosperity. However, when they fall, the loss can be devastating to the local economy.

Because of that boom-and-bust cycle, Shrader said, “we are trained to believe that economic prosperity is fleeting and temporary.”

As the U.S. transitions away from mineral extraction as an energy source, Shrader said protecting lands will be key because of its importance to local industries like hers.

The hearing follows the introduction of a resolution outlining the Green New Deal by Democratic lawmakers last week. The resolution proposes a sweeping package of environmental policies designed to respond to accelerating climate change, and would rapidly transition the United States away from carbon-based energy sources.

Rep. Liz Cheney, R-Wyo., took aim at the Green New Deal during the hearing, as did Rep. Paul Gosar, the ranking member of the subcommittee.

Gosar described the proposal as a “socialist fairytale,” while Cheney questioned witnesses about the idea of eliminating air travel. The idea is not outlined in the Green New Deal itself, but was briefly included in a draft FAQ released by Rep. Alexandria Ocasio-Cortez, D-N.Y. The draft has since been retracted.

Rep. Jared Huffman, a co-sponsor of the Green New Deal, said Cheney’s assertion was “disingenuous” and clarified that the elimination of air travel is not a tenet of the resolution.

However, the particulars of the Green New Deal were not the hearing’s primary focus.

The witnesses were not all in agreement about the effects of climate change legislation. Bill Bissett, the president of the Chamber of Commerce in Huntington, West Virginia, expressed concern about climate change policy leading to job losses in Appalachia.

Others argued that policy change could facilitate economic equality. Peter Hille, the president of the Mountain Association for Community Economic Development, said that Appalachia has been struggling for decades, and diversifying the economy would be integral to its survival.