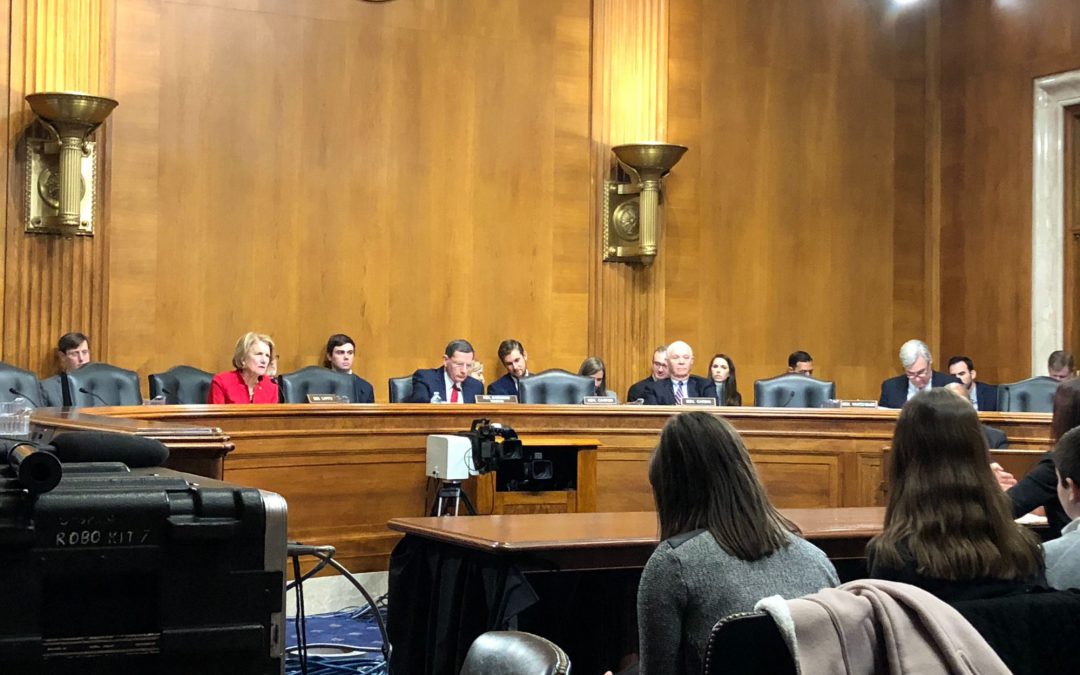 The Senate EPW committee questions Nicole Nason on her nomination to be administrator of the Federal Highway Administration. (Daniel Rosenzweig-Ziff/MNS)

WASHINGTON –– After two years without an administrator of the Federal Highway Administration, President Trump’s pick to lead the agency, Nicole Nason, testified before the Senate Environment and Public Works Committee on Tuesday. Nason, an experienced government administrator since 1995, is the current assistant secretary of the Bureau of Administration.

“That is the longest gap in leadership for the agency in more than 100 years,” ranking member Sen. Carper, D-Del. said. “I hope that the nomination of Ms. Nason to be administrator of FHWA is both evidence that the Trump Administration is aware of these organization needs, and also a signal that the administration is ready to work with Congress on reauthorizing our nation’s transportation programs.”

Senate Democrats emphasized the need to take climate change into account in overseeing the FHWA. “Some people think climate change isn’t real, it’s esoteric. It is real. Our greatest source of carbon is from transportation,” Sen. Carper said, citing the National Climate Assessment.

Sen. Whitehouse, D-RI., reiterated climate change’s importance in transportation planning, noting that Atlantic coastal home values have lost $15 billion in value due to increasingly rising sea-levels. He also noted that under the Trump Administration, writing and speaking about climate change has been censored, including by Sec. of Transportation Chao in a letter to Whitehouse.

While the administration and Senate Republicans have doubted the effects of climate change, Nason affirmed the Democrats’ requests for commitment to incorporate science and climate change into the FHWA, including the commitment to neither limit nor censor wording or data.

“Good data is king. I am a firm believer in good data,” Nason said. “Political retaliation is not something I have ever accepted.”

Senate Republicans, though, focused on the delayed response from previous administrations in permitting large rebuilding projects, rather than addressing climate change’s role specifically.

“There ought to be a shot clock on the whole process,” Chairman Sen. Barasso said after the hearing. “There are ways to make sure that we don’t in any way jeopardize the environment, but at the same time move along more quickly with the process of the planning. When we talk about horrendous crashes and the lives that are lost, there’s a real cost to people and families and lives by delaying some of these projects which are designed for a safer infrastructure for Americans.”

Nason expressed a commitment to safety and working closely with states to specifically target rural roads. “My priority is safety on all roads, but we must recognize and address some of the unique safety challenges faced by rural communities,” she said.

In 2017, 37,133 people lost their lives in highway crashes, averaging 102 deaths per day, according to the Department of Transportation. “The only acceptable number is zero,” she said.

At the Bureau of Administration, Nason manages a budget of $1 billion. If confirmed, she will head an agency with a proposed $44 billion budget for 2019.

The EPW committee is tentatively planning mark-ups for next week, with a vote to follow soon thereafter. The exact date of a vote is not currently scheduled.