PELOSI URGES DEMOCRATIC UNITY TO ACHIEVE “MEDICARE FOR ALL” 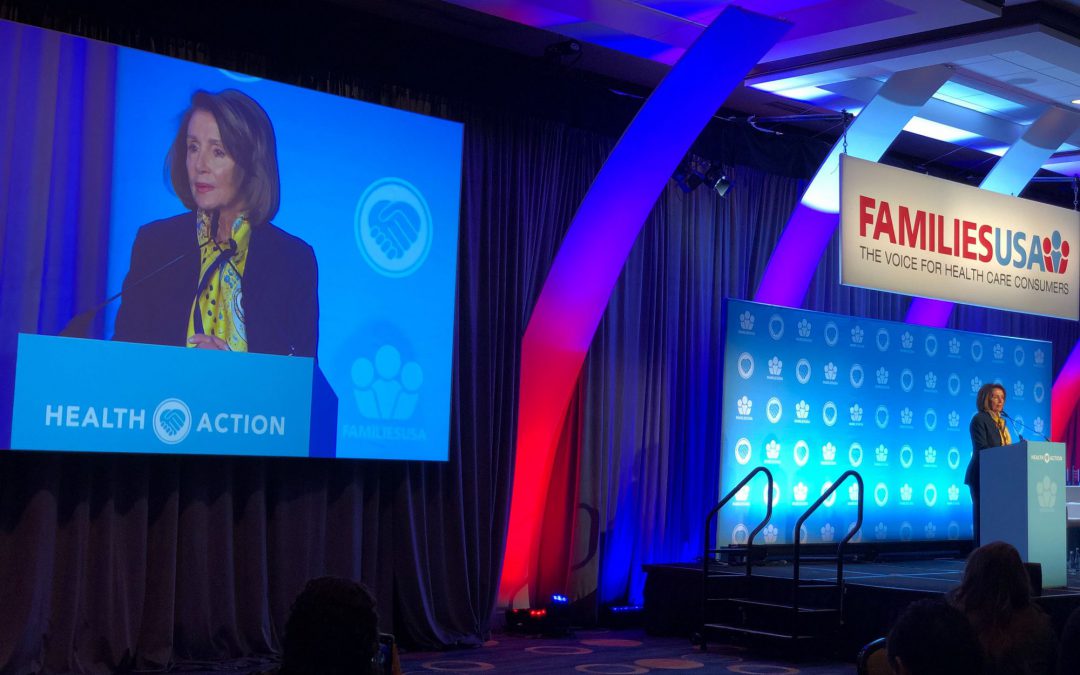 House Speaker Nancy Pelosi pushed for a “Medicare for All” health care system and laid out goals for Democrats at the 2019 Health Action Conference. (Ester Wells/MNS)

WASHINGTON — House Speaker Nancy Pelosi called for unity among Democrats and health care activists Thursday to achieve a “Medicare for all” system and to “stave off the assaults” on health care by Republicans.

“Our diversity is our strength, but our unity is our power,” Pelosi said of Democrats in the House.

Speaking at the 24th annual Health Action Conference hosted by Families USA, Pelosi said the goals for Democrats include lowering the cost of health care, reducing prescription drug prices, preserving the benefits provided by the Affordable Care Act, expanding Medicaid and achieving health care for all.

Families USA Executive Director Frederick Isasi called Republican efforts under the Trump administration to repeal the Affordable Care Act “the most cold-blooded, calculated and concerted attack on the health of American families in our nation’s history.”

Association of American Physicians and Surgeons Executive Director Jane Orient, however, said in an interview that if Democrats get their way and establish universal health care, “It will destroy American medical care.”

Orient said she expects that a Medicare for all system would not only cost more but make it more difficult for patients, particularly elderly patients, to access medical care and foster personal relationships with their physicians.

“Insurance should go back to being insurance,” she said. “It’s like your automobile or home insurance, where you pay a premium, and you never expect to make a claim unless you have a car wreck or fire.”

Health care was a critical issue for 2018 Democratic candidates, many of whom ran and won on platforms that included the creation of a Medicare for all system. In fact, support for a single-payer system is widespread: In August of 2018, a Reuters-Ipsos poll found that 85 percent of Democrats and 52 percent of Republicans — and 70 percent of all Americans — support Medicare for all.

But Democrats have differing visions for what such a system would look like. Sen. Bernie Sanders, I-Vt., introduced a bill last year that would replace private insurance with government-sponsored universal insurance. Other Democrats, including Rep. Jan Schakowsky, D-Ill., and Sen. Sheldon Whitehouse, D-R.I., are in favor of a Medicare buy-in system, in which Americans would buy into government insurance or continue on private plans.

While Democrats are divided on their conceptions of a universal health care system, they generally agree that the government should play a bigger role in managing and regulating the health care industry.

Sister Simone Campbell, executive director of the Catholic social justice lobby NETWORK, described a woman she met in Savannah, Georgia who died because she was unable to afford her asthma medication.

“That’s wrong that a woman should die for not being able to afford her inhaler and for a state to willfully refuse to expand the mechanisms for her to be able to live,” Campbell said.

Stacey Abrams, Georgia’s Democratic nominee for governor in 2018, told the conference that expanding health care coverage to low-income Americans and talking about Medicare for all, especially in conservative regions of the country, should be prioritized.

For Pelosi, Democratic control of the House is key to producing this change.