Houston Neighborhood Shows Who Bears the Brunt of Climate Change 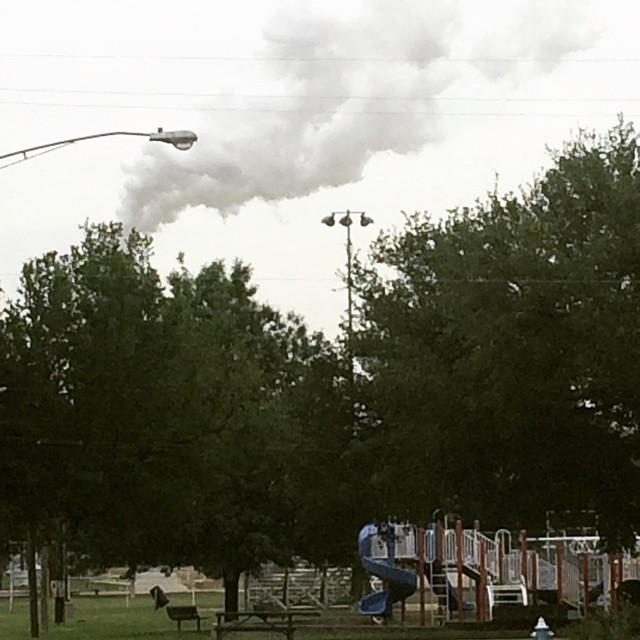 In a park in the middle of Manchester, flaring from nearby refineries fill the air with smoke. (Michelle Meyer)

As climate change increases the frequency and severity of natural disasters, experts predict that the effects of hurricanes, floods, and other disasters will be much worse for low-income communities.

Houston’s Manchester neighborhood is a symbol of the problem.

On one edge of the neighborhood is the Houston ship channel, one of America’s busiest ports. Railroad tracks lay on another side of the neighborhood. Oil refineries surround the area, littering smokestacks across the sky. The community is 98 percent Latino and high school graduation and median income rates are low, but asthma and cancer rates are comparatively high.

The National Climate Assessment, jointly released by 13 federal agencies in November, affirmed this risk, noting that across all climate risks, “low-income communities, some communities of color, and those experiencing discrimination are disproportionately affected by extreme weather and climate events, partially because they are often excluded in planning processes.”

At a press conference for Justice First, a coalition of various organizations fighting for environmental justice like the Hip Hop Caucus, the Sierra Club and others, Rep. Donald McEachin, (D-Va.,) called it “one of the most urgent civil rights issues of our time.”

Shannon Van Zandt, a fellow in the Hazard Reduction and Recovery Center at Texas A&M pointed out the issue of aid that lower income families have to deal with after disaster, noting that the Federal Emergency Management Agency gives money to rebuild homes damaged by disasters, but there often is a cap on the amount of aid.

“That may be enough for a higher income [families], but it doesn’t come anywhere close to what a low-income family needs — typically it’s their whole house that gets damaged,” she said.

According to Van Zandt, lower income families often don’t have savings or insurance to supplement the FEMA support. Many of their claims for support from FEMA are rejected because FEMA can’t determine if the damage was from the disaster or “deferred maintenance.”

As a result, the post-disaster homeless rates are higher in low-income communities.

But the problems go even deeper.

In addition to the destruction caused by natural disasters, the risk of exposure to pollutants increases following disasters in neighborhoods like Manchester.

“In the areas where we weren’t seeing pollution … all of a sudden, we were,” said Garett Sansom, a professor of environmental and public health at Texas A&M.

“PAHs (potentially harmful pollutants) were showing up in locations that we hadn’t seen before, which suggests that the water was moving some of these exposures around in a way that wouldn’t have happened had there not been major flooding.”

Studies found there was a greater percentage of open ditch drainage systems found in communities of color than other areas of Houston.

“That means there is a lot more surface water causing localized flooding and exposing the water to pollution,” Van Zandt said, which can harm drinking water following disaster.

These issues, seen throughout the nation, are exacerbated by the fact that low-income communities often are not represented, both in terms of municipal upkeep and federal support, in government decision-making.

“The recovery funds [after Harvey] went first and foremost to subsidize work going on in industry, energy, oil, gas to make up for lost profits,” said Yvette Arellano, senior staff for Texas Environmental Justice Advocacy Services. “We no longer have someone who can speak Spanish within the [Environmental Justice] Department.”