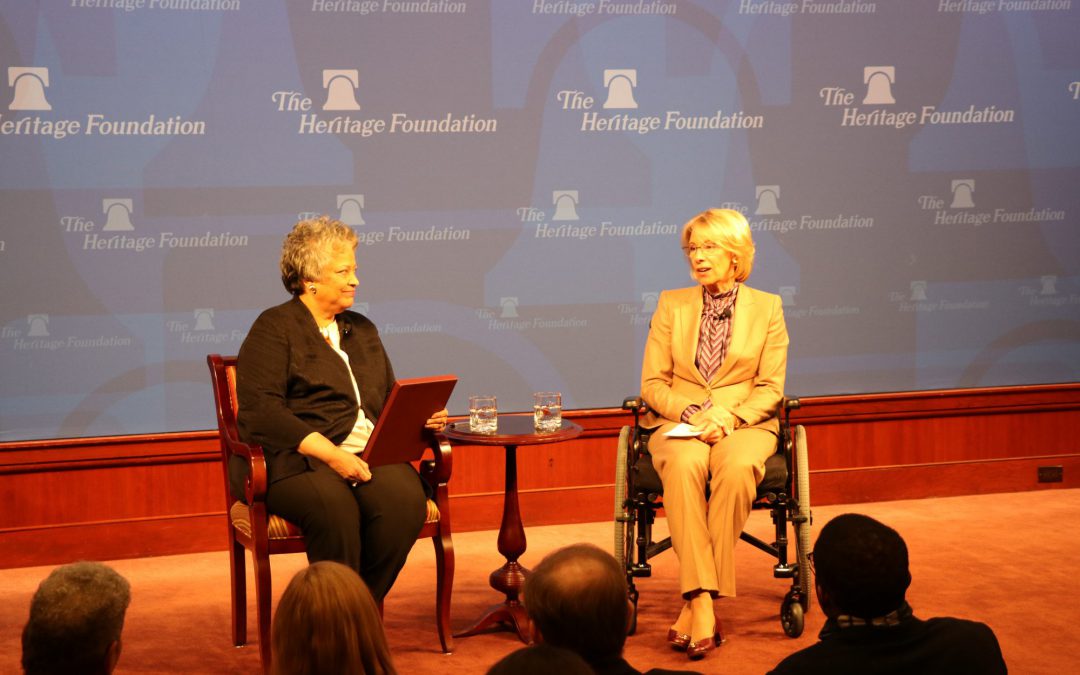 WASHINGTON – In honor of National School Choice Week, Education Secretary Betsy DeVos said Wednesday that school choice programs allowing parents to choose which school their children will attend are the future of education.

At an event sponsored by the conservative Heritage Foundation, DeVos praised the success of the federal D.C. Opportunity Scholarship program in Washington, which has operated for 15 years and currently allows more than 1,650 children from low-incomes families to attend private schools using government-provided vouchers to offset the cost.

Over the past decade, school choice programs have increased across the country, said DeVos.

Both DeVos and Heritage Foundation President Kay Cole James have been a major supporters of school choice and President Donald Trump’s approach to education.

The long-term outcomes of students who participate in school choice include greater educational attainment, fewer experiences of bullying and increased feelings of school safety, said Patrick Wolf, a professor at the Arkansas College of Education and Health Professions who has conducted research on school choice.

Despite this growth, DeVos and James called for more funding and support from Democrats to expand school choice programs.

“In the past administration, this program was a political football. It is imperative Congress reauthorizes this program,” she said.

“The statistics show that parents want choices when it comes to their children’s education. Teacher unions remain an obstacle. Old narratives continue to shape how we act,” said DeVos.

DeVos and James praised the Washington program for supporting parents like Virginia Walden Ford. Ford said that 15 years ago she was “hopeless” as a single, low-income mom trying to help her youngest son receive a better education.

After the boy received a scholarship from the D.C. Opportunity Scholarship Program that allowed him to move to a different school, his academics and behavior improved dramatically, Ford said.

“School choice was so important for him and so many other kids,” she said. “The opportunity to choose is something parents deserve to have.”