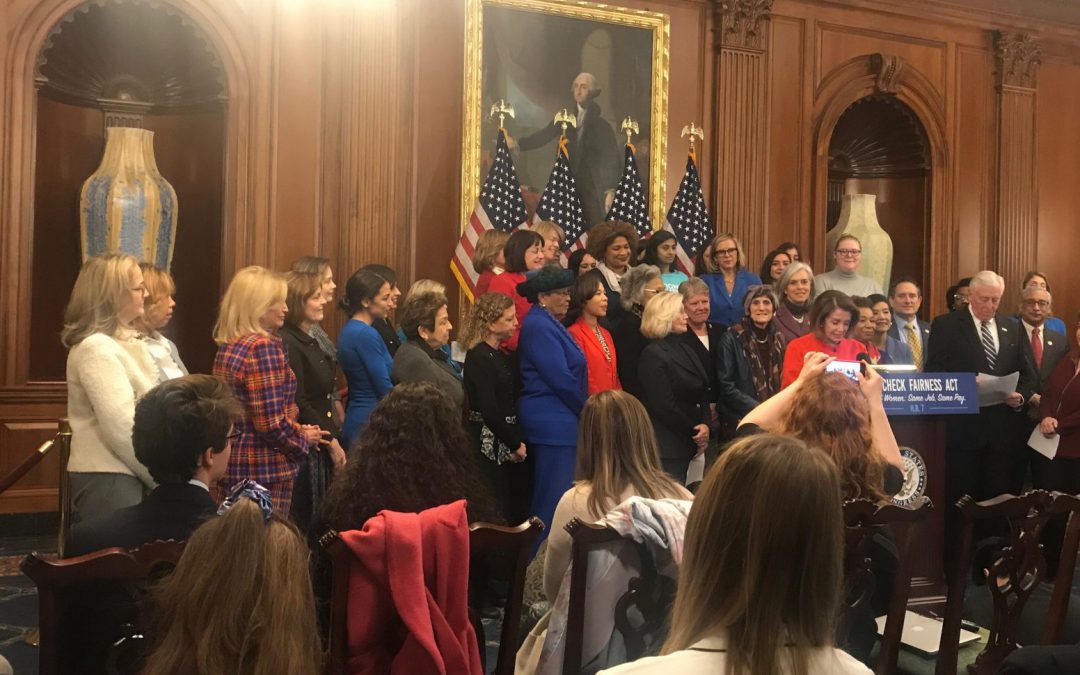 Nancy Pelosi introduces the Paycheck Fairness Act with a group of activists and lawmakers at the Capitol on Wednesday. The bill has been introduced in every congress since 1997. (Gabrielle Bienasz/MNS)

WASHINGTON —The Paycheck Fairness Act was reintroduced in the 116th congress Wednesday by House Speaker Nancy Pelosi, D-Calif., and other Democrats from the House and Senate. If passed, it would protect employee’s ability to discuss their salaries, require employers to cite job-related reasons for pay disparities and create salary-negotiation programs for women, among other provisions.

Rep. Rosa DeLauro, D-Conn., has introduced the Paycheck Fairness Act in each session of congress since 1997. President Obama attempted to pass it several times but was stopped by a lack of Republican support.

“Lord knows we’ve been in this fight side by side for many years,” DeLaura said. “I cannot tell you how difficult it has been to break through on something so simple: that men and women in the same job deserve the same pay.”

The larger the gap, the more likely to be a significant barrier to moving into the middle class, according to Rep. Barbara Lee, D-Calif.

“The gender pay gap is a poverty trap,” she said.

Maya Raghu, Director of Workplace Equality at the National Women’s Law Center, said that a common practice, basing a new employee’s salary on a previous salary, is a part of the problem.

“You’re carrying that wage gap, and that pay discrimination, with you from job to job,” she said.

Within each job, it can be a challenge for some women to find out that they are being discriminated against. The Institute for the Women’s Policy research said that 70 percent of private sector workers were, formally or informally, discouraged from discussing their salaries in 2017.

The event took place on the 10th anniversary of the signing of the Lilly Ledbetter Fair Pay Act – a law that overturned the Supreme Court decision which limited employee ability to arbitrate pay discrimination.

“For 20 years, I took home wages tainted by discrimination, wages significantly less than my male colleagues, who were junior to me, and some I had trained,” said Lilly Ledbetter, namesake of the Lilly Ledbetter Fair Pay Act.

“But I had no idea, all through those years, that I was being cheated, until someone did give me the anonymous tip,” she said.

Pelosi said that, after equal pay, issues like affordable childcare and paid leave are next on the agenda. According to Debra Ness, the President of the National Partnership for Women and Families, those issues are connected.

“Because we get paid less, we also then take time out of the workplace to do caregiving, and then our social security checks are lower,” she said.

Policies around these issues–as well as those around sexual harassment–determine a woman’s “economic security” and “dignity” in the workplace, according to Ness.

Rep. Jackie Speier, D-Calif., agreed that the pay gap is connected to harassment and discrimination.

Ness cautioned that women of color have to be at the center of the fight against pay discrimination. “They have been fighting this fight for years and years. If we want to make things better for all women, we have to stand shoulder to shoulder,” she said.

However, she said that the diverse new members of Congress give her cause for hope for the bill’s passage.

“I think there is a whole new energy out there to make the world different and to recognize many barriers that women and families face” she said.

Pelosi said she “hopes” that the bill will be signed by President Trump by April 2, also known as “Equal Pay Day.” That day marks how far into a year a woman will have to work to match the wages of her male counterparts in the previous year.