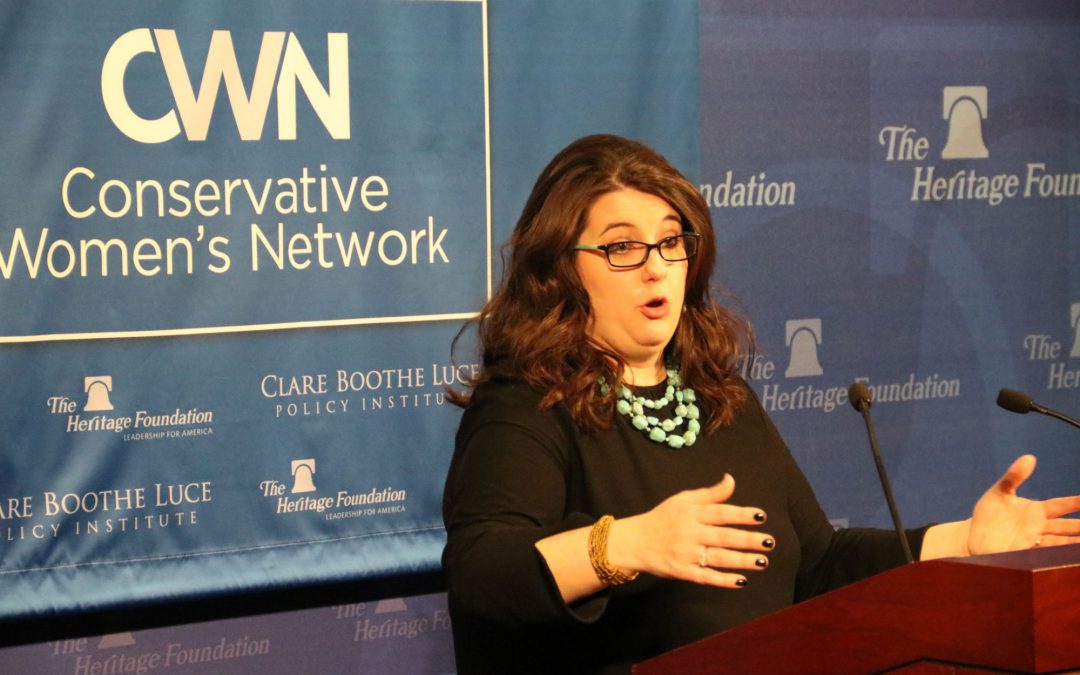 Kristan Hawkins, president of Students for Life of America, addressed the Conservative Women's Network Tuesday at a discussion hosted by The Heritage Foundation. (Henry Erlandson/MNS)

Kristan Hawkins, president of Students for Life of America, condemned Democratic lawmakers who are passing abortion rights legislation in states such as New York at a Conservative Women’s Network event hosted by the Heritage Foundation.

Rhode Island Gov. Gina Raimondo announced her support Thursday for a similar abortion bill to that of New York, allowing women to have an abortion up to nine months of pregnancy for health reasons due to “age, economic, social and emotional factors.” A Rhode Island House committee was scheduled to vote on the measure Thursday.

New York Gov. Andrew Cuomo signed into law last week a measure that allows medical professionals who aren’t doctors to perform abortions and extends the legality of the procedure until the mother’s due date if her health is endangered or the fetus is not considered viable. The previous law permitted abortions after 24 weeks of pregnancy only if a woman’s life was in danger.

Earlier this week, Virginia state Delegate Kathy Tran introduced a bill that would eliminate the requirements for at least three physicians to confirm “that a third trimester abortion is necessary to prevent the woman’s death or impairment of her mental or physical health”. Under the new proposal, the requirement would be reduced to confirmation by one physician. The bill is currently tabled.

Virginia Democratic Gov. Ralph Northam was criticized this week for supporting the bill, including comments he made Wednesday suggesting that a nonviable fetus that is delivered may not have to be resuscitated if the woman and doctor concur. Republican Sen. Ben Sasse of Nebraska called Northam’s comments “morally repugnant.”

VA Governor Ralph Northam says infants w “deformities” may be candidates for abortion – AFTER birth. “The infant would be delivered, the infant would be kept comfortable … and then a discussion would ensue between the physicians and the mother.” That’s called infanticide

I never thought I would see the day America had government officials who openly support legal infanticide. https://t.co/VzM4FPO7QT

Hawkins stressed the importance of spreading the anti-abortion message on college campuses. She said she conducted a poll on college campuses that found seven out of 10 millennials want severe restrictions on abortion. “We have a mission and that mission is to make abortion illegal and unthinkable,” Hawkins said.

She criticized the Democratic party for demanding that its candidates and lawmakers be pro-choice, but also called on Senate Republicans to act on their anti-abortion views in Congress.

Hawkins’ remarks follow the release of a Marist Poll Survey, which surveyed 1,066 adults Jan. 8-10 about their attitudes on abortion.

The poll found that roughly 75 percent of respondents would limit abortion to the first three months of pregnancy and nearly six in 10 would ban abortion after 20 weeks, except to save the life of the mother. The poll revealed strong support for restricting abortions despite a majority of Americans identifying as pro-choice.