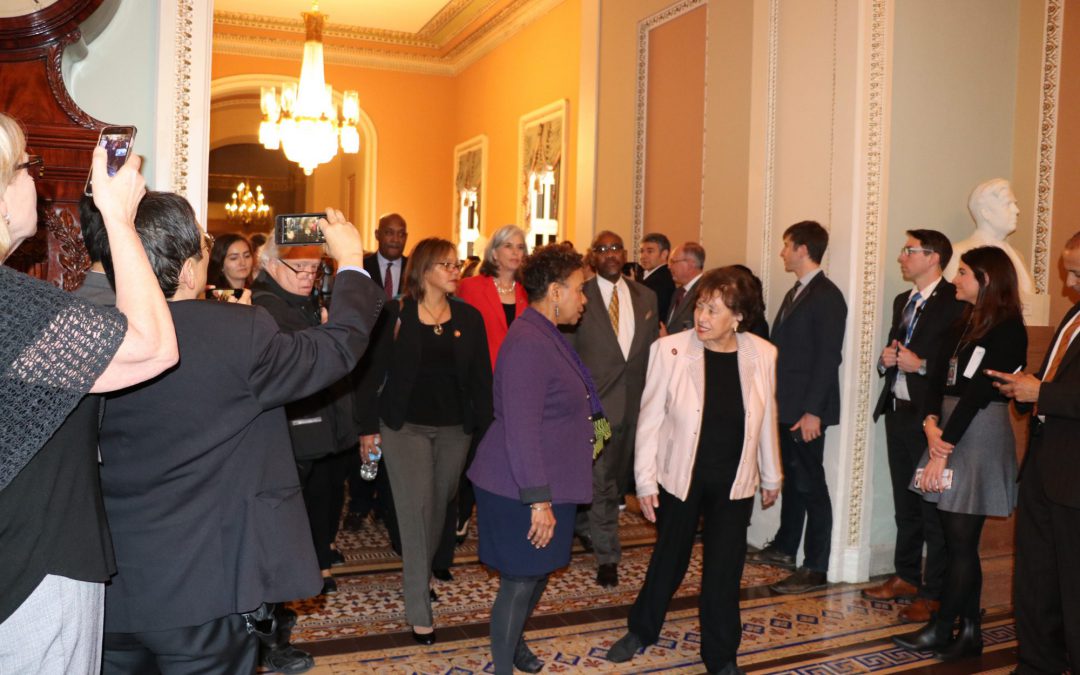 House Democrats march into the Senate, showing their support for a bill to end the government shutdown. Both votes failed on Thursday, causing the shutdown to drag on another day. (Charlotte Walsh/MNS)

WASHINGTON – The Senate on Thursday voted against President Donald Trump’s proposal to end the shutdown and build the border wall as well as a Democratic measure for short-term funding to reopen government while seeking a compromise on border security.

The Trump-backed measure was short of the 60 votes needed – 50-47 – to end a filibuster. All Republicans and nine more Democrats needed to vote yes. Only one Democrat, West Virginia Sen. Joe Manchin, voted for the bill. Two Republicans, Sens. Tom Cotton of Arkansas and Mike Lee of Utah, voted against the bill.

The Democratic bill, which failed 52-44, would have funded the government until Feb. 8. Workers would have received pay. By that date, Congress would have needed to form a bipartisan border security package, or the shutdown would resume.

Sen. Chris Van Hollen, D – Md., voted for the Democratic bill. “It would have also meant breathing room to get to the negotiating table and work out a long-term solution,” he said.

The president’s bill would have funded the $5.7 billion border wall in exchange for a three-year reprieve to 700,000 who received work permits under Deferred Action for Childhood Arrivals, or DACA. It also would have returned Temporary Protected Status to 300,000 individuals.

Sen. John Cornyn, R–Texas, voted for Trump’s proposal and spoke on the Senate floor after the vote. He called the president’s deal “generous” for what it offers DACA recipients. “While this is far from a solution to the pervasive problems in our immigration system, but it is a start,” he said.

With the shutdown at day 34, and both bills dead, there was talk that the two sides might form a bipartisan border security package.

“We need sensible solutions, which along the border consists of three solutions. It’s physical barriers in some locations, technology in others, and personnel in others,” Cornyn said.

The Senate is not yet scheduled to vote again on ending the shutdown or a border security package.