Students walked out of class nationwide. Here are some who stayed behind 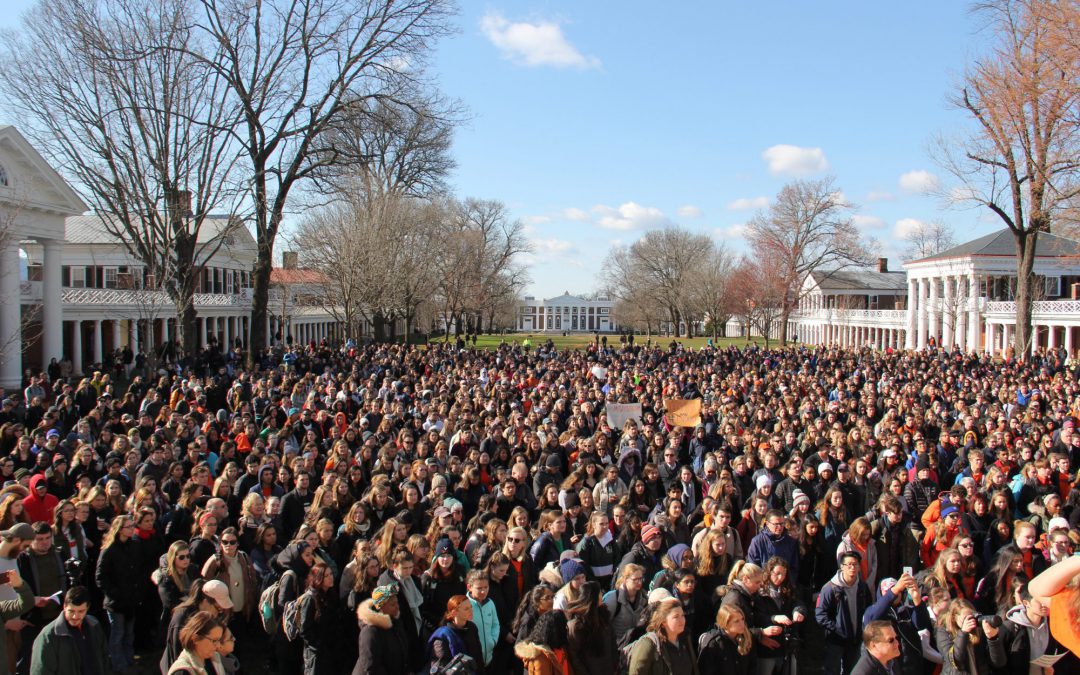 Thousands of students gather at University of Virginia’s main lawn for the national school walk out. However, some students decided not to participate for political or academic reason. (Catherine Kim/MNS)

CHARLOTTESVILLE, Va. –– As thousands of University of Virginia students walked out their classes on Wednesday to protest gun violence, especially in schools, Lecturer Jim Todd invited students to “please feel free” to get up and leave if they wanted to support the #enough movement. Two-thirds of the class remained in their seats.

They watched through a window as, students walked out of classes in droves to gather at the school’s Rotunda for the protest. Meanwhile, Todd’s Introduction to American Politics class went on as scheduled.

While more than 1,000 students commemorated the 17 victims of the Marjorie Stoneman Douglas High School in Parkland, Florida shooting on its one-month anniversary, many students at UVA chose to stay in their classes or just not participate because they disagree with the political message – or they couldn’t afford to miss a class.

Students nationwide walked out of classes. to call for stricter gun control measures, such as banning assault weapons and expanding background checks. Generally, the protests began at 10 a.m. lasted for at least 17 minutes –– a minute for each death in the Parkland shooting.

During class, Todd asked how many students were 18, and a few hands shot up. He told the class that they should take the time to think about the “senseless slaughter” of 17 students. He reminded them that one victim was 18, like themselves.

While some morning UVA classes were canceled pre-emptively, Todd said he had lots to cover in his class with the busy news week.

“If you are going to have a walkout to show that this is of such importance to you that it’s more important than your class,” he said, “you can’t do that unless the class is being held.”

Tanner Hirschfeld, a second-year student at UVA, said he couldn’t support the walkout because it was “decidedly partisan” and “anti-gun owner.”

“I believe this protest is calling for things that are not only unconstitutional but something that’s not going to bring about any fix to the problem,” Hirschfeld said. “We need to mourn the losses, I think we need to talk about how we can prevent it from happening again. If this was a walk for addressing mental health issues … I would’ve said yes.”

Haley Fauntleroy, a fourth-year student who helped organize UVA’s walkout, said she was disappointed that some students let politics keep them from the walkout.

“I would hope that people would be able to … at least stand with those who lost a life and encourage others to reflect on how we can prevent it in the future and kind of remove politics from the horror we have already experienced,” she said.

But for Sean Davidson, another second-year student,missing class wasn’t an option because he has been struggling academically this semester. Instead, he stayed in Todd’s class, answering questions and offering his opinions on the week’s biggest political news.

Davidson said he still did his “due diligence” by reading the names of the Parkland victims, and he admired the students who went.

“I looked at their pictures and read their stories, so I’m not ignoring the problem,” he said. “It’s important to participate in the demonstrations, but I also think it’s important to stay on task with what your goals are. … I felt like being here in class, participating in discussion here, is also beneficial to the other students who showed up.”