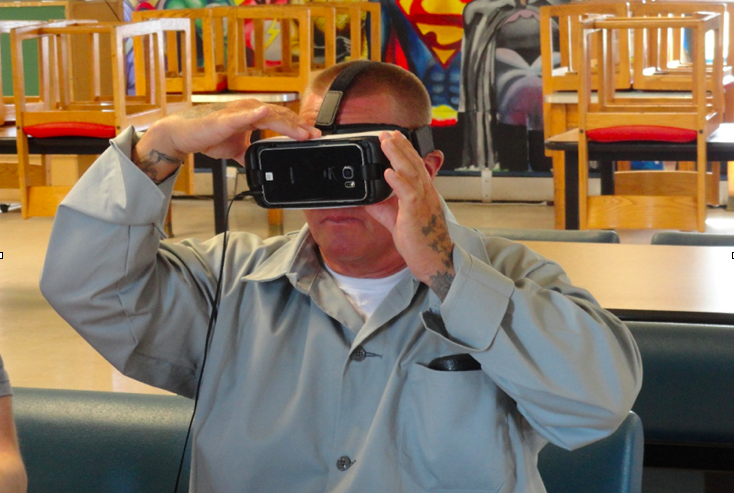 PHILADELPHIA — In a twist akin to an episode of Black Mirror, the Pennsylvania Department of Corrections is turning to virtual reality to help reduce recidivism rates.

The state’s program is focusing on juvenile lifers, inmates sentenced to life without parole before the age of 18. As the state with the largest number of juvenile lifers, Pennsylvania faced a serious challenge when the Supreme Court ruled in 2012 that life sentences for juvenile offenders were unconstitutional.

The 518 juvenile lifers themselves had not been thinking about planning for a life after prison – many have been imprisoned for decades – so preparing them for release is more complicated than for many other offenders. And the prison system’s release preparation program wasn’t ready for so many new releases.

By February of last year, 105 inmates had been released.

In response, the Department of Corrections implemented a series of programs to help ease juvenile lifers’ re-entry into society, including classes, training and since 2016, virtual reality.

The department’s goal is to reduce the likelihood of recidivism, which can be triggered by struggles to readjust to society, said Daniel McIntyre, director of Pennsylvania’s Bureau of Community Corrections. According to the Federal Bureau of Justice, more than half of state prisoners return to prison within five years of their release.

“Our goal in corrections and everywhere else is to change people’s life and provide community safety,” McIntyre said. “And that’s accomplished by changing behavior of the people that we supervise and manage. They’ve made mistakes, (but) you have to believe they want to change.”

VR company Nsena has been filming 360-degree videos of halfway houses to provide the images the inmates see.

“One of the individuals said that it was déjà vu when they got to where they were living because they had seen the 360 video,” said Nsena CEO Ethan Moeller. “They were just a lot more comfortable with their surroundings because they were able to see it before they before they left the facility.”

VR technology helps reduce the anxiety that comes with entering a new environment for the first time in decades, said Mike Kutenits, a former juvenile lifer who participated in the VR program after spending 41 years in prison. Kutenits, who left prison in July, now lives in a halfway house in Philadelphia. No longer paralyzed by the fear of living in a new place, he said he was able to focus on other life skills, such as opening a bank account.

Cyndi Rickards of Drexel University said she is skeptical of VR’s potential in reducing recidivism rates. The main problem, she said, is that the prison system fails to provide continual rehabilitation throughout inmates’ imprisonment.

“Particularly for the cases of juvenile lifers, you have taken people at a time where we know their brain is still developing, and you have moved them from a community into a punitive correctional facility and treated them as if they were adults,” said Rickards, who is an assistant teaching professor of criminology and justice studies. “To think that a virtual reality tool is going to compensate that approach is naive, in my perspective.”

But the department is expanding the use of VR beyond facility tours for juvenile lifers.

Corrections officers also use it as a reward for positive behavior, such as taking medication or spending time outside their cells, McIntyre said. Awards include virtually experiencing scuba diving in the ocean or hiking in the mountains, he said.

Nsena is developing a new use of VR for corrections: an interactive simulation to help inmates practice diffusing tension and dealing with conflict.

For Wayne Pritchett, an ex-juvenile lifer who was sentenced in 1976 at the age of 17, simply fitting in during regular interactions outside prison can be challenging.

“For a lot of guys big shopping malls are uncomfortable, as I was at first –– people coming this way, people coming that way,” he said. “That should be another program they implement into virtual reality.”

“(Inmates) can experience something tough and traumatic and kind of get trained for it,” Dreisbach said. “There’s just so many different uses for it that we’re just starting to scratch the surface.”

PhillyDOCVR from Medill Washington on Vimeo.