In the #MeToo era, young conservative women look for their spot 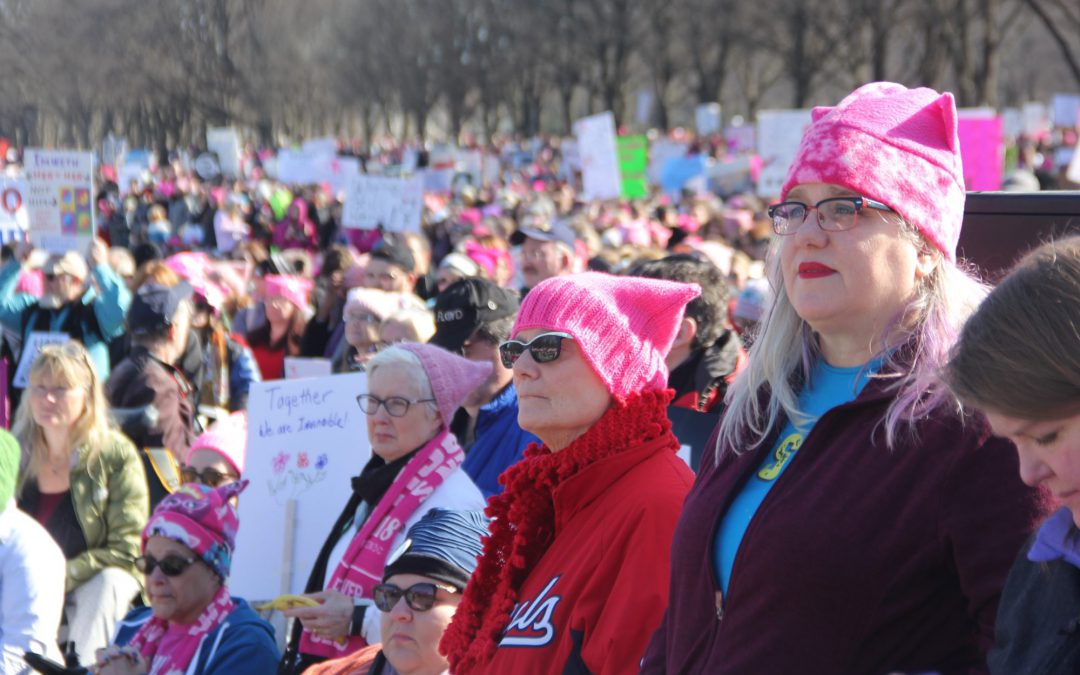 Protesters listen to one of the speakers featured at the Women's March on Washington 2018.(Caroline Vakil/MNS)

Jami Averwater called her father during the second week of law school with a dilemma — she couldn’t identify a single other Republican in her classroom.

When she did acknowledge she was a Republican, she said, her classmates at Belmont University in Nashville would incorrectly assume she opposed gay marriage and abortion rights.

“I got to the point where I was afraid to tell people I was a Republican,” she said.

More than a year after President Donald Trump took office, many young conservative women have said they feel too intimidated to share their beliefs.

At the same time, these same young women can feel excluded from their own party. Caught in a gray area between conservatism and moderate social values, Averwater said she has felt “attacked” and “rejected” by the Republican Party because some of her beliefs do not align with party ideology.

More than half of American women — 54 percent — identify as Democrats or lean Democratic, according to a 2016 Pew Research poll. Yet in 2016, 53 percent of white female voters voted for Trump, according to New York Times exit polls.

At a time when feminism and politics are linked to the issue of sexual assault, some conservative women say they take issue with the terms of the debate.

Malliga Och, a professor at Idaho State University who studies women and politics, said younger women tend to have more moderate beliefs and can feel excluded from both parties.

“If conservative women are more in the middle of the spectrum,” she said, “it’s harder to find a home in the party that is on the extremes.”

Averwater and other young conservative women fear their political affiliation creates misconceptions and can ostracize them. Averwater said the list of names she’s been called include “anti-woman” and “anti-humane.”

“I’m kind of like the face of the Republican Party in my law class,” Averwater said, and it’s not because she’s the only Republican. “I just express my beliefs no matter who is on the other side of the negotiation table.”

Karin Agness Lips, founder of the Network of Enlightened Women, said she created her nonprofit after she attempted to join a women’s conservative club on her college campus and ran into a problem — there weren’t any.

Lips said she hopes her organization will encourage conservative millennial women to speak out.

“Too often, we find that they remain quiet on these college campuses,” Lips said. “From the very beginning, we’ve been mocked.”

Excluded from the conversation

Some conservatives said the Women’s March, first held the day after Trump’s inauguration and revived again in 2018, showed how Republicans can be excluded from conversations surrounding women’s issues.

“There are a lot of young women who support the ideals of women’s empowerment, but look to the roster of speakers and wonder, ‘Where are the conservative voices?’” Onwuka said. “It’s not surprising that [conservative young women are] turned off by a lot of the feminist rhetoric today.”

Onwuka said conservative women are not a “monolithic” group, but instead vote based on a variety of issues.

“It’s important for them to think beyond just the ‘women’s issues’ bucket of reproductive rights,” she said.

For example, Lips said, women could focus on education reform, national security and free speech. She added that movements like the Women’s March have become “dogmatic.”

Despite agreeing that women play an important role in the Republican Party, conservative women differ on how or if feminism has a role on the right.

Deckman, the Washington College professor, said she’s found that conservative women generally fall into two camps on feminism: those who believe liberals have “hijacked” feminism and now want to “take back” women’s empowerment, and those who avoid the issue entirely because many people associate feminism with liberalism.

Amanda Stuckey, a sophomore at Virginia Tech, said she doesn’t care much about feminism.

“I’m in a really liberal environment, and this feminism thing is huge,” she said. “I’ve never personally experienced or even seen a lot of the things these women seem to have problems with.”

Averwater said feminists and conservative women can join together to fight sexual harassment. Over the past few months, women have dominated national news as the #MeToo movement exposed alleged offenders in nearly every industry, from entertainment to politics.

The #MeToo movement has rippled through both political parties after allegations of sexual misconduct led to, among other things, the resignation of Democratic Sen. Al Franken, and the defeat of Republican candidate Roy Moore in Alabama after he was accused of sexually assaulting teen girls.

Averwater stressed the #MeToo movement should not be a partisan issue.

“Even if someone hasn’t been sexually harassed in their life and they are fortunate to not have experienced that, they should still feel empathetic for fellow women,” Averwater said. “Sexual harassment is not toward Republicans or Democrats, it’s toward all women.”

“We should be coming together, and an accusation is a very serious thing,” she said. “We should take it seriously, no matter who it’s against.”

But attitudes like Averwater’s can be unpopular in the conservative movement. Mona Charen, a conservative columnist, spoke on a panel at the Conservative Political Action Conference in February and criticized Republicans for “being hypocrites about sexual harassers and abusers of women” by not forcefully supporting #MeToo principles — she was later booed off the stage.

“The Republican party cannot continue to say that they are pro-woman if they allow sexual harassment to be dismissed in the way that Roy Moore was handled,” she said.

Onwuka said there is even some overlap between feminism and conservatism, like the belief in individual choice.

“There is a role for women’s empowerment in the conservative movement; in fact, it’s fundamental,” she said. “There is an opportunity for those who don’t want the feminist label, but want to be empowered.”

Averwater said she respects the Women’s March and similar movements because they bring women together to rally around a few core ideals.

“On a grassroots level, [the march] is awesome,” she said. “If we had something like that on the right, I think we could really make an impact.”

How Republicans can win women back

Och said moderate Republican women were “commonplace” 20 years ago, but they “simply no longer exist.”

Onwuka said the Republican party needs to recognize women as having multiple roles in society, acknowledging that they are “not just soccer moms,” but also decision makers.

“All of these factors come into play when women are thinking about the issues that affect their daily lives, but also affect our nation,” Onwuka said.

Averwater, the law student, said young conservative women need to knock on doors and advocate locally to show their support for Republican candidates. When young women stand together, she said, they won’t fear unfair labeling.