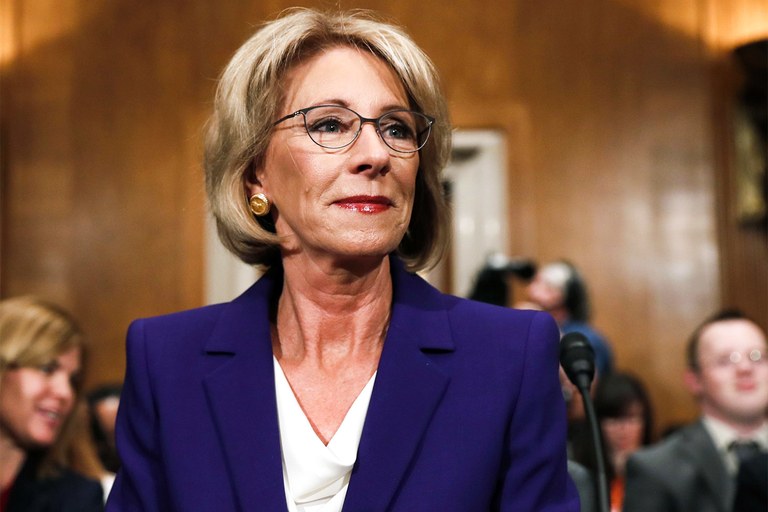 WASHINGTON ––  Education Secretary Betsy DeVos sidstepped questions on whether she would fund President Donald Trump’s proposal to train and arm teachers as a way to stop school shottings, saying it’s up to Congress to decide. She also didn’t address whether arming teachers would put minority students more at risk than others.

During a House Appropriations Committee hearing to review the Education Department’s proposed $59.9 billion budget for 2019, committee members mainly focused on Trump proposals to reduce school shootings, mainly by training some teachers on how to use gums and then arming them.

“I’m concerned about all students –– students of color and all students,” DeVos said. “We want to ensure students have the opportunity to learn in safe environments.”

In a telephone interview, Temple University Education Professor James Earl Davis said that students of color have been “historically more subjected to discrimination, oppression and violence.”

“Your head’s in the sand about racial bias and racial discrimination,” Lee said. “Madam secretary, you just don’t care much about civil rights of black and brown children. This is horrible.”

Rep. Rosa DeLauro, D-Conn., asked DeVos if she would reconsider supporting Trump’s plan to use federal funds to train teachers on gun safety and  then to arm them in schools if the majority of teachers and parents nationwide opposed it.

DeLauro cited a March 16 Gallup poll, which shows that 73 percent of teachers oppose teachers and staff carrying guns in schools.

“That is a matter for Congress to decide, not for the secretary of education to decide,” DeVos replied.

DeVos said she will investigate ways to protect students as head of a new school safety commission that Trump created. The commission consists of three other cabinet members: Health and Human Services Secretary Alex Azar, Attorney General Jeff Sessions and Homeland Security Secretary Kirstjen Nielsen. She said the number of members is limited so the commission isn’t “bogged down in a lot of bureaucracy. The commission will invite experts and students for advice, DeVos said.

The commission will hold hearings in the next few weeks, Devos said. She said she recognizes school safety as an urgent issue that needs to be addressed immediately.