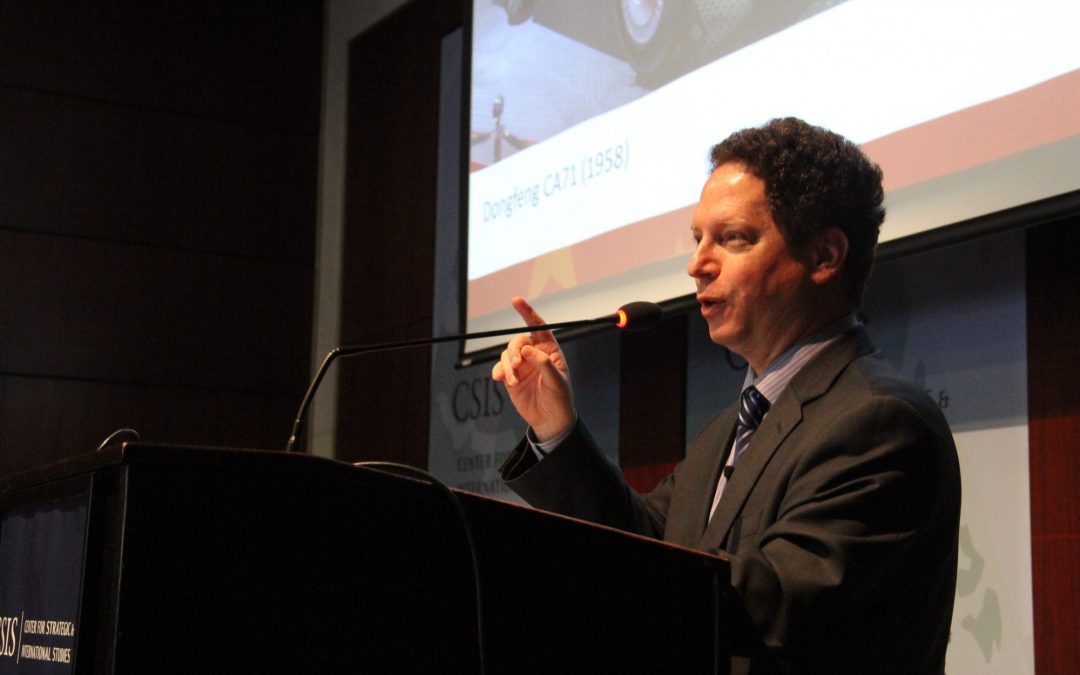 Scott Kennedy, deputy director for the Freeman Chair in China Studies at the Center for Strategic & International Studies, discusses how China's policies have contributed to a rise in electric and other new-energy vehicles in the country. (Caroline Vakil/MNS)

WASHINGTON – Electric and self-driving cars could have real environmental benefits and make more public space available, Anand Shah told a panel discussion at the Center for Strategic & International Studies Wednesday. How? Because such vehicles could allow cities to get rid of “these pesky things called cars that are laying around all the time,” said Shah, a senior adviser at the global business strategy firm Albright Stonebridge Group.

The key to making these cars environmentally friendly is to use them efficiently, T. Donna Chen, assistant professor of civil and environmental engineering at University of Virginia, said. Apps can do this by through two formats: car-riding and ride-sharing, which pair passengers with vehicles sequentially one rider at a time or pairing multiple riders at a time in a self-driving format. These formats would have more widespread environmental benefits. One of those would mean cutting back on the amount of land in cities devoted to parking.

Instead, ride-sharing could allow areas devoted to parking to be repurposed for other municipal needs. Using the cars throughout the day could mean far fewer cars would be needed. “A personal vehicle is used about 3.8 percent of the time. That means it sits for 23 of 24 hours a day. In order for us to deal with those cars … we have to have parking spaces on the road,” said Shah. As an example, Shah pointed at “malls in Texas that can hold thousands and thousands and thousands of cars.” In New York City and Washington, D.C., he added, 30 percent of public space is allocated to parking.

But Chen said that the impact of a self-driving car will ultimately depend on how people use them. In some scenarios, a self-driving car could rack up more miles than a non-self-driving car if a person had its autonomous car run errands while they’re at work or had its car drive miles away to avoid higher parking fees – posing more environmental concerns than before.

China is one country which has already started embracing electric and other new-energy vehicles as well as self-driving cars.

“If China were to move toward a mobility model that included electric, autonomous vehicles where there was significant ridesharing, that might radically increase the market,” Scott Kennedy, deputy director for the Freeman Chair in China Studies at the Center for Strategic & International Studies, said.

The CSIS estimates that the Chinese government has spent $51 billion in subsidies and price rebates for electric vehicles, subsidies for new-energy-related infrastructure like charging stations, research and development, and vehicle procurement between 2009-2017. In that same period, that has amounted to $146 billion in vehicle sales. As a leading manufacturer and consumer in the automobile market, self-driving cars would expand China’s market.