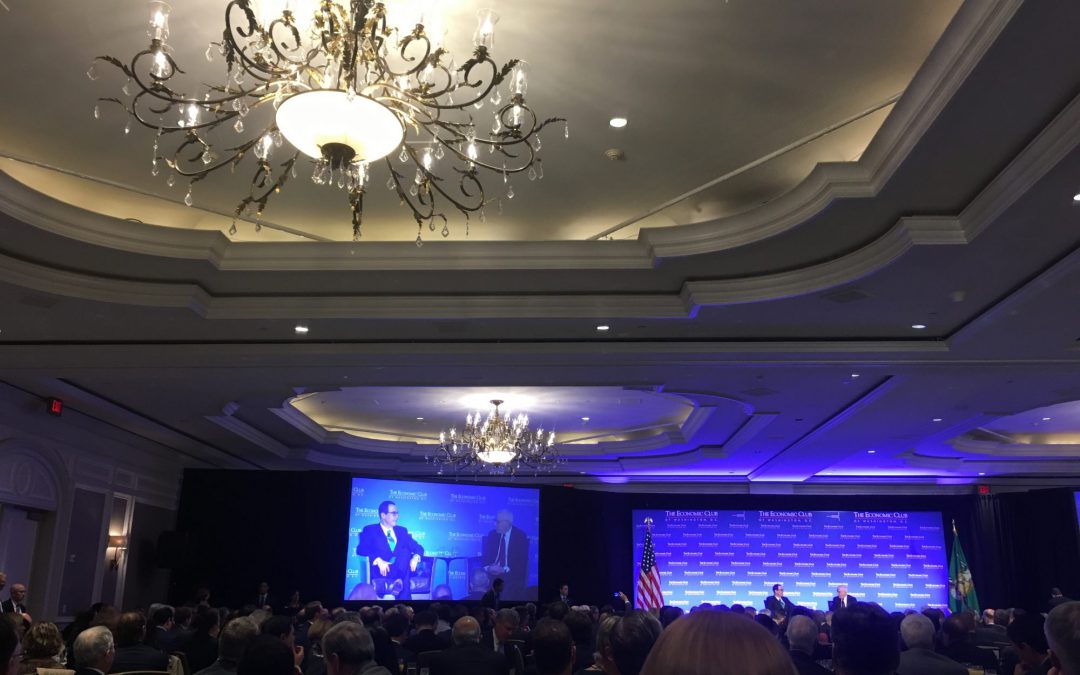 Treasury Secretary Steven Mnuchin says he expects the government to raise the debt ceiling, but he is in talks with President Trump to change the funding process. (Erica Snow/MNS)

He also told the Economic Club of Washington that the recently passed tax reform bill that was signed into law by President Donald Trump is a “well thought-out plan” that will eventually pay for itself, fulfilling a major goal of Trump’s policy agenda. The reformed tax code, which will lower corporate tax rates as well as increase tax breaks for the wealthy, marked a legislative success for Trump’s agenda but passed without a single Democratic vote in the Senate last month.

Mnuchin, who will have an important say in implementation of the tax overhaul, said he and others tried to win bipartisan support, meeting with Democratic leaders and traveling on Air Force One with lawmakers.

“I think there was a big philosophical difference,” Mnuchin said. “We were focused on creating growth, creating things that were good for the entire economy and they kind of drew a line in the sand.”

“We are borrowing money from the future, from our children’s future, to give tax breaks to corporations now,” Pelosi said. “I mean, really? And to the wealthiest 1 percent in our country.”

The Congressional Budget Office estimated earlier this month that the federal deficit will increase by at least $1.5 trillion between 2018 and 2027 because of the tax reform law, increasing the federal debt from 75 percent of gross domestic product today to 97.5 percent.

Mnuchin also said the government must raise congressionally mandated spending caps and the debt ceiling to continue funding the government. While he didn’t advocate for the eradication of a debt ceiling entirely, he said he is in talks with Trump to rework funding.

“We absolutely have to raise the debt ceiling every time we get close to the debt ceiling,” he said. “One of the things the president and I are thinking about is how can this process be changed.”