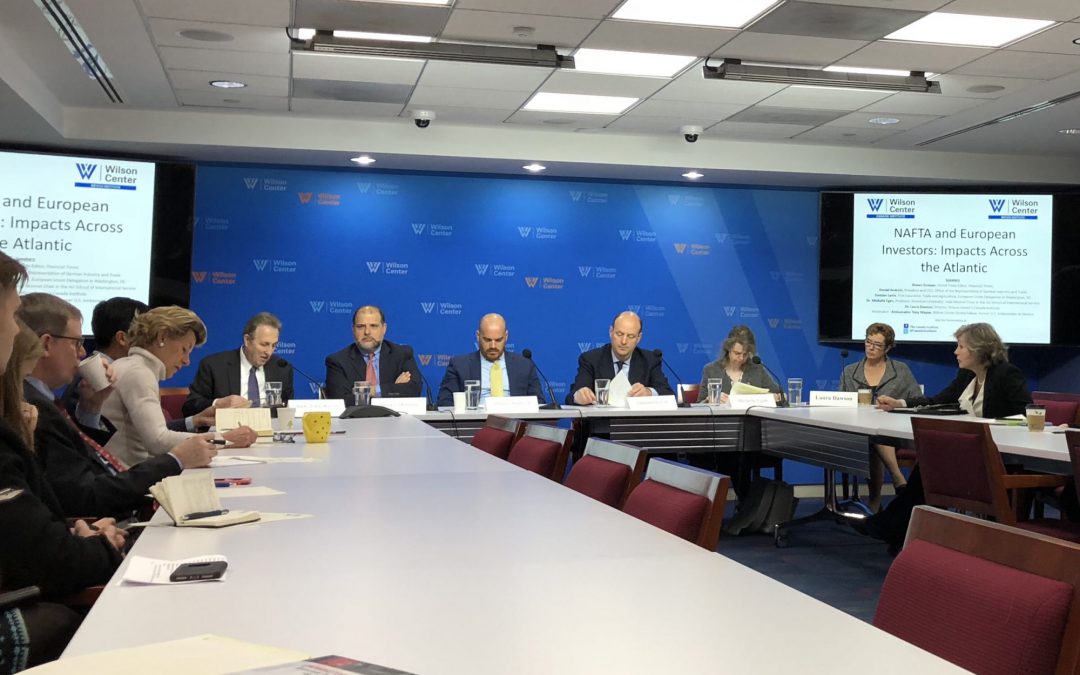 Experts address European perspectives on NAFTA during a panel hosted by the Canada Institute at the Wilson Center. (Kristina Karisch/MNS)

WASHINGTON — European countries are major players in North American imports and exports so their impact should be considered in the renegotiation of the North American Free Trade Agreement, experts on international trade said Wednesday.

The experts, hosted by the Canada Institute at the Wilson Center, a think tank focusing on international issues, stressed the importance of the agreement to European countries.

“There are so many areas that we’re making good progress in inside NAFTA where it would make much more sense to have a transatlantic conversation,” Dawson said. “If you think that trade is about bringing willing buyers closer to willing sellers and removing the barriers between them and letting competitive industries be more competitive in the world, then we need to have better conversations.”

Since NAFTA was created in 1994, U.S. trade with Mexico and Canada has more than tripled to over $1 billion a year, said Anthony Wayne, the former U.S. ambassador to Mexico and Argentina. Critics of the agreement claim it’s responsibility for U.S. job loss and wage stagnation caused by low-wage competition across the open market.

Among the industries that benefit from the agreement are car manufacturers, whose supply chains often stretch across all three countries. Daniel Andrich, president and CEO of the Office of the Representative of German Industry and Trade, said that German manufactures — especially car companies — see the NAFTA market as “crucial, important and very attractive.”

Andrich said the U.S. is Germany’s main export market for Germany and NAFTA is vital to ensuring the market’s accessibility. He said that over two-thirds of German products made in Mexico go to the U.S. and Canada.

President Donald Trump has often derided NAFTA, once calling it “the worst trade deal ever signed.” At the beginning of his presidency, he threatened to back out of it completely, but he has recently made statements to suggest he would be open to stay if it could be renegotiated to his satisfaction.

The sixth round of renegotiation talks are underway in Montreal, and are expected to continue in an informal setting at the annual World Economic Forum in Davos, Switzerland, where Trump is scheduled to speak on Jan. 26.

Damien Levie, the first counselor for trade and agriculture of the EU delegation in Washington, said NAFTA renegotiations could set an example other trade negotiation processes.

“When NAFTA was concluded, that provoked shockwaves in the world of trade policy,” Levie said. “A new NAFTA agreement may play an important role as well.”