How state taxpayers will be affected by new federal tax law 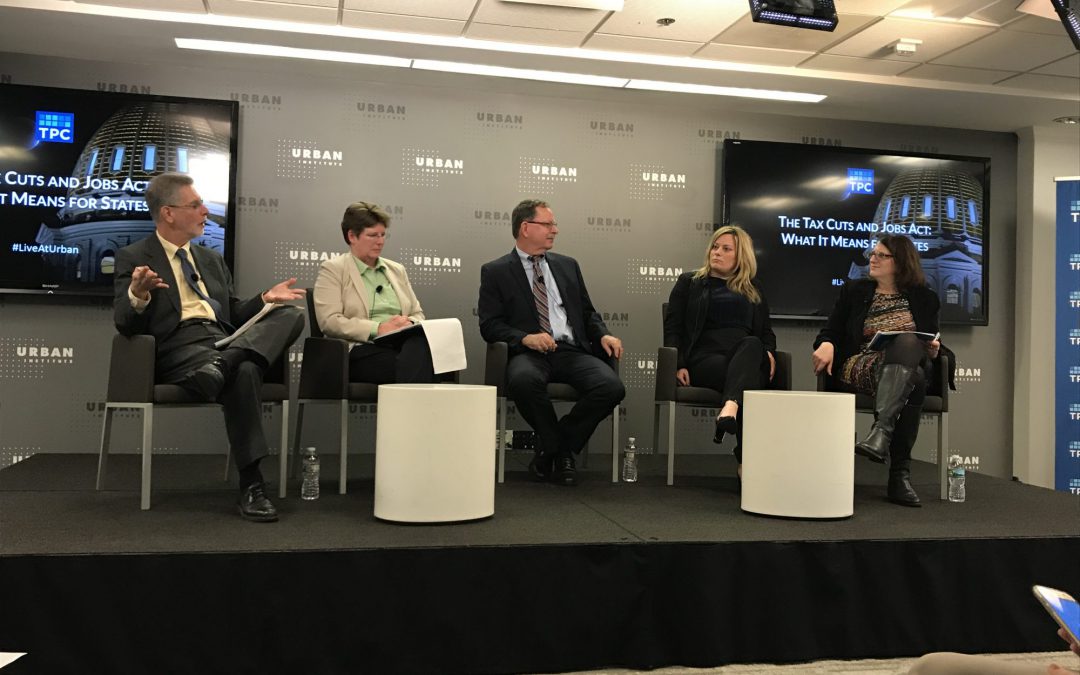 Moderator Howard Gleckman leads a panel discussion at the Urban Institute Wednesday morning on what will change for state governments under the new tax bill. (Maggie Harden/MNS)

WASHINGTON – The recently passed federal tax bill is one of the most significant tax code rewrites in U.S. history, according to Laura Wheeler, a senior fiscal researcher at Georgia State University. Wheeler and four other tax experts, speaking Wednesday at the Urban Institute, said that because states directly model their tax codes from federal policies, most states are now facing the need for significant tax overhauls, which could mean big changes for state taxpayers.

“The easy part was passing a bill in the middle of the night,” Sandra Beattie, the deputy director of the New York State Division of the Budget, said. “The hard part is actually taking that bill to maintain the economic well-being within your state.”

State legislators are rushing to determine exactly how the upcoming changes will affect their constituents, particularly because the fiscal year is already well under way. Taxpayers are worried about how they will be affected. Here are some of the main changes the panelists predicted state taxpayers will see in the upcoming months.

Under the old tax code, state taxpayers received a state and local tax deduction if they owned property. The policy was intended to encourage home ownership, which would then increase spending and boosting economic growth.

Under the new tax code, however, the state and local deduction is capped at $10,000. States like New York, where the average property tax deduction has been $22,000, could face pressure to reduce or not increase state taxes as homeowners are hit with higher federal tax bills. The experts said that the state and local deduction cutback primarily impacts states like New York or California, where property taxes are higher and people tend to be wealthy enough to own large amounts of property.

In Beattie’s home state of New York, Gov. Andrew Cuomo issued in an executive order in December that allows local governments to collect property taxes earlier than usual. This was an attempt to offset the estimated $14 billion deficit the change would create for New York. Other states, such as California and Maryland, have also attempted to pass legislation to circumvent the policy.

New York will be destroyed if the deductibility of state and local taxes is included in any final plan that passes the House.

Laura Wheeler, a senior fiscal research associate at Georgia State University, said her home state of Georgia has not yet decided how it will address the state and local tax changes, but she does not anticipate the widespread panic New York experienced, particularly in states where many of the households make under $100,000.

The new tax law also rewrote the federal tax withholding tables. If states follow suit and adopt new, similar withholding guidelines, which many are expected to do, some taxpayers could soon see a boost in their take-home pay.as lower amounts of taxes are withheld.

“As the feds do, they think about the feds, and don’t think about the implications to the states,” Wheeler said. “Things are going to change dramatically, and every state is doing something different.”

Taxpayers may want to consider a conservative approach toward the amounts they have withheld from their paychecks for state and federal taxes in case states make tax changes later this year.

Hicks warned taxpayers that “they’re on their own” to make sure they’re not underpaying their state and federal taxes.

How much will taxpayers really be affected?

In the end, the experts said, the degree to which taxpayers will be directly affected will depend on how much of the federal policy their state adopts.

“Regardless of which state you’re in, this is the biggest breach the federal government has had into state budgeting processes,” Beattie said. “Now we know what we’re dealing with, now we know what we can analyze. However, on the backs of that we still have additional, significant cuts to domestic programs in the states, and all of that factors into our discussions.”