Declines in teen pregnancy rates may be saving the economy billions, experts say 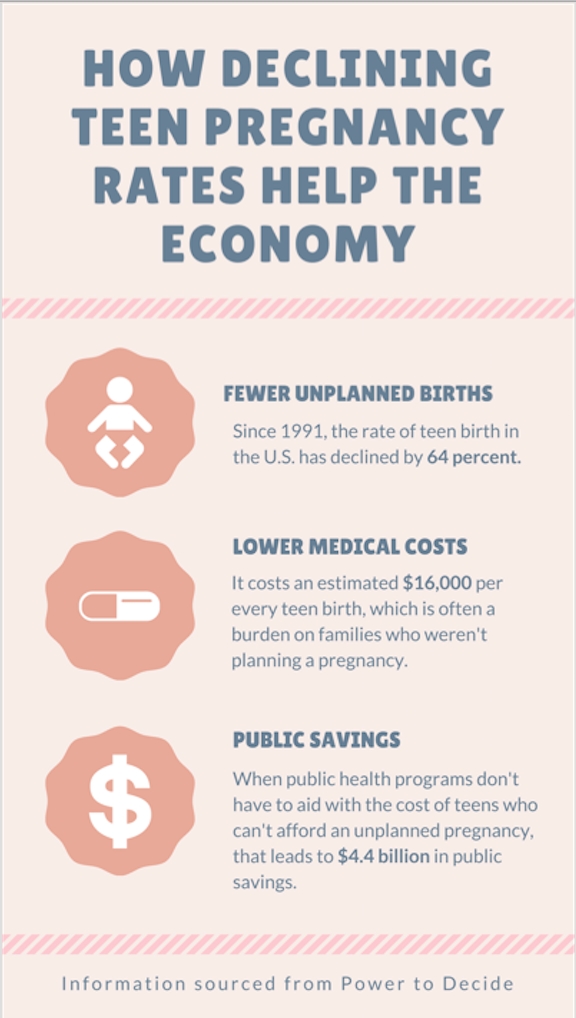 “Now more than ever, our political climate and rhetoric is particularly polarized,” Power to Decide researcher Kelleen Kaye said. “Having objective empirical data that emphasizes the importance of prevention is particularly compelling, because even though there’s been a lot of progress, we still have a long way to go.”

The Department of Health and Human services cut $213.6 billion in grants to teen pregnancy prevention programs in July 2017.

In November, HHS granted $10 million to pregnancy prevention programs that include abstinence research.

In July, the Department of Health and Human Services cut $213.6 million for grants to teen pregnancy prevention programs across the country working on statistics-based approaches. In November, HHS announced a $10 million research grant endeavor to improve pregnancy prevention programs, including efforts that promote abstinence, although that means the programs still faced significant net reductions in funding.

The organization behind the recent findings, Power to Decide, released a report last week that said declines in teen pregnancy led to a $4.4 billion savings in 2015 alone, the most recent year for which data was available.  Kelleen Kaye said the group started this research over two years ago, and she hopes this report underscores the importance of continuing teen pregnancy prevention programs in today’s political climate.

Power to Decide estimates that each unplanned teenage birth costs $16,000.

The research quantified the cost of providing medical and economic support during pregnancy to be $16,000 per teen birth in 2015. It estimated that prevention programs averted 428,000 births based on trends since 1991, and nearly 75 percent of those avoided births would have required the use of public programs – resulting in the consequent savings when those births were avoided.

“Prevention pays off,” Power to Decide CEO Ginny Ehrlich said on a teleconference. “Prevention is an investment that saves money in the long run, and it allows young people to live their best lives.”

The $16,000 per-birth cost, according to Power to Decide researchers, covers prenatal, labor, delivery and postpartum care for the mother and one year of infancy care for the child. These expenses are often covered by programs such as Medicaid, Women Infant and Children, Temporary Assistance for Needy Families and the Supplemental Nutrition Assistance Program.

But some researchers caution against looking at these raw numbers in an overly simplistic way. Duke University Economics Professor V. Joseph Hotz pointed out that while declines in teen pregnancy may have contributed to government savings in public health programs, society may be paying the cost elsewhere, such as in the form of the costly earned income tax credit policy.

“This may come off as, ok, public health costs went down,” Hotz said. “But did society pay more? We really need to do the total cost-benefit analysis.”

The EITC is a tax subsidy for low-income families, and larger credits are available to families with more children. According to the libertarian Cato Institute, the EITC puts a $60 billion cost on other taxpayers. While most of the EITC beneficiaries were not teenage mothers, Hotz points out that this may be one way society is offsetting the $4.4 billion it’s saving in public health programs designed to help with teenage childbirth.

The number of sexually active teens declined by 16 percent between 1988 and 2015.

Dr. Michael New, an associate scholar at the pro-life Charlotte Lozier Institute, agreed that reductions in teen pregnancy can have beneficial economic effects. However, he criticized the study for failing to acknowledge that declines in teenage sexual activity also contributed to declining teenage pregnancy rates. According to the Centers for Disease Control and Prevention’s National Survey for Family Growth, between 1988 and 2015 the percentage of teenage boys who had had sex fell from 60 percent to 44 percent.

Despite contentions over the data’s implications, Power to Decide said that the substantial strides prevention programs have made in preventing teen childbirth have improved society. The number of teens who had unplanned births dropped 64 percent between 1991 and 2015, the group said, and mainly credited increased contraception access and education.