Which senators have passed the most laws? 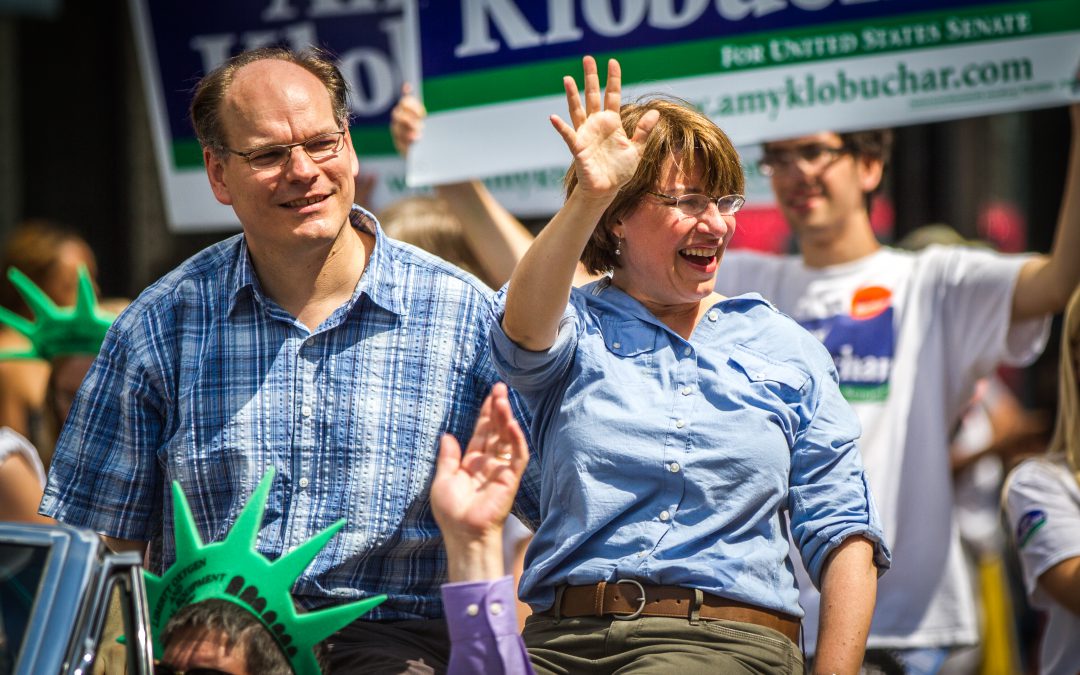 WASHINGTON — With a little over a month to go for the current Congress, what the lawmakers accomplished in the last two years can be measured in different ways. One yardstick: Who backed the most bills that have become law?

The top honor goes to Sen. Amy Klobuchar, according to an analysis of legislative data from GovTrack, an independent congressional tracking website. The second-term Minnesota Democrat has sponsored or co-sponsored 27 bills that have been enacted into law. By comparison, seven senators have seen 12 bills they put their names on — the median number — become law, including Democrats Elizabeth Warren and Cory Booker and Republican Lindsey Graham.

“I’ve always approached this work by putting the people of Minnesota first,” Klobuchar said in an e-mail. “For me, that means working across the aisle to get things done. While it hasn’t been the easiest year to bring people together — OK, that was an understatement — I have gotten to know the people I work with and always look for common ground when I can find it.”

Ten other senators join Klobuchar in the 20-plus club. Despite Republican majorities in both the House and Senate in the 114th Congress, eight of the 11 are Democrats, and, contrary to conventional wisdom, there’s a healthy mix of experience levels included.

The longest-serving senator in the top 11 is Sen. Orrin Hatch, the most senior Republican in the Senate. Hatch was first sworn in as a senator for Utah in 1977. In contrast, the least-experienced senator, New Hampshire Republican Kelly Ayotte, is wrapping up her first and final six-year term. She lost her bid for re-election by fewer than 1,000 votes.

Sarah Binder, a George Washington University professor of political science who specializes in Congress and legislative politics, cautioned against defining success in the Senate by hard metrics, such as the number of bills enacted into law. Instead, it’s important to note the dual responsibilities of senators — as lawmakers and as “representatives coming and making present the views of their state.”

Some politicians, she said, may not have their names on many bills that become law, but they have the power to influence the legislative agenda. Most notably, Senate Majority Leader Mitch McConnell of Kentucky has only sponsored or co-sponsored seven bills that became law, and Senate Minority Leader Harry Reid of Nevada has seen three of his enacted. No one would question their legislative influence. 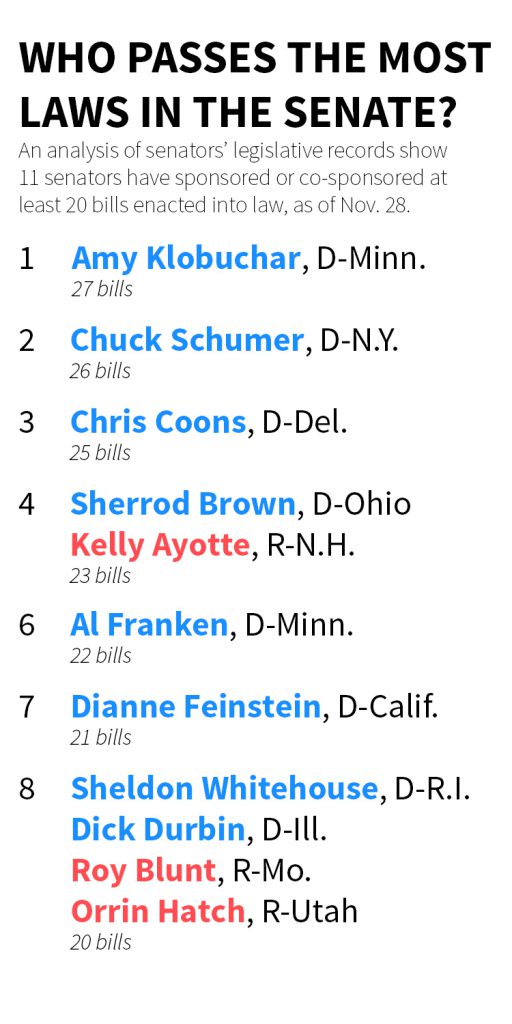 A CNN/ORC poll released Sunday found that more than 80 percent of Americans believe the country is more divided on major issues this year than in the past. However, Republican calls for bipartisanship are lower now than they were in 2008, when the Democrats took control of both Congress and the White House.

Still, several of the senators who made the cut for the top 11 from both sides of the political spectrum echoed Klobuchar’s sentiments and emphasized bipartisanship as a factor in their success. In fact, two of the senators on the list — Roy Blunt, a Missouri Republican, and Sherrod Brown, an Ohio Democrat — have worked together to produce bipartisan bills. Blunt told USA Today in June that the two have been friends for about 30 years, and of the about five things they agree upon, “all five of those are now federal law.”

“When Ohioans write my office, they aren’t thinking about whether I’m a Republican or Democrat. They’re thinking about the loss of a job, a bill they’re struggling to pay or the crumbling road they drive to school or work each day,” said Brown, who came in fourth on the list of most bills enacted into law, in an e-mail. “My job is to serve them, and to do that I’ve got to seek out common ground with my colleagues. … We aren’t always successful, but striking up bipartisan conversations on the issues facing our constituents is the first step to passing legislation.”

Bills can be insignificant — such as ones to rename post offices and issue commemorative coins — and newer politicians may be more likely to introduce bills to bolster their records with re-election in view, Binder noted. Because of this, it’s possible that hard metrics could overstate or understate a senator’s influence.

Sen. Dianne Feinstein, D-Calif., who came in seventh, has been successful because she introduces bills that she believes can become law, spokesman Tom Mentzer said. A look at Feinstein’s legislative record in the 114th Congress shows she has worked on important California issues such as homelessness, which affects her home city of San Francisco, where she was once mayor.

“A willingness to work with both parties and have flexibility to find common ground is vital,” he said in an e-mail. “It goes beyond the bills the senator introduces.”

“She asked him to introduce her own bill because it would have a better chance at passage with a Republican sponsor,” he said. “It’s about getting results, no matter what path that requires.”

Binder said it is not surprising that Democrats are heavy hitters in the Senate — a traditionally more bipartisan chamber — even though Republicans are in control. With President Barack Obama in the White House, that “helps fuel more effort on the Democrats’ side, even when they’re in the minority,” she said.

“Republicans and Democrats disagree on lots of issues, but when bipartisan solutions solve real problems I’m all for it,” Blunt, who ranked eighth in a four-way tie, said in an e-mail. “I’ve worked with my Democrat colleagues to pass legislation to boost manufacturing, expand access to mental health care, reauthorize the Victims of Child Abuse Act, and provide the largest funding increase the National Institutes of Health has received in over a decade. I’ve always looked for areas of common ground where we can work together to address Americans’ priorities, and look forward to continuing that effort.”

The other senators on the top 11 list are Democratic Sens. Al Franken of Minnesota, Chuck Schumer of New York, Chris Coons of Delaware, Dick Durbin of Illinois, and Sheldon Whitehouse of Rhode Island.

GovTrack compiles data on legislative records. Senators’ bills that became law include those that were enacted via a companion bill in the House.