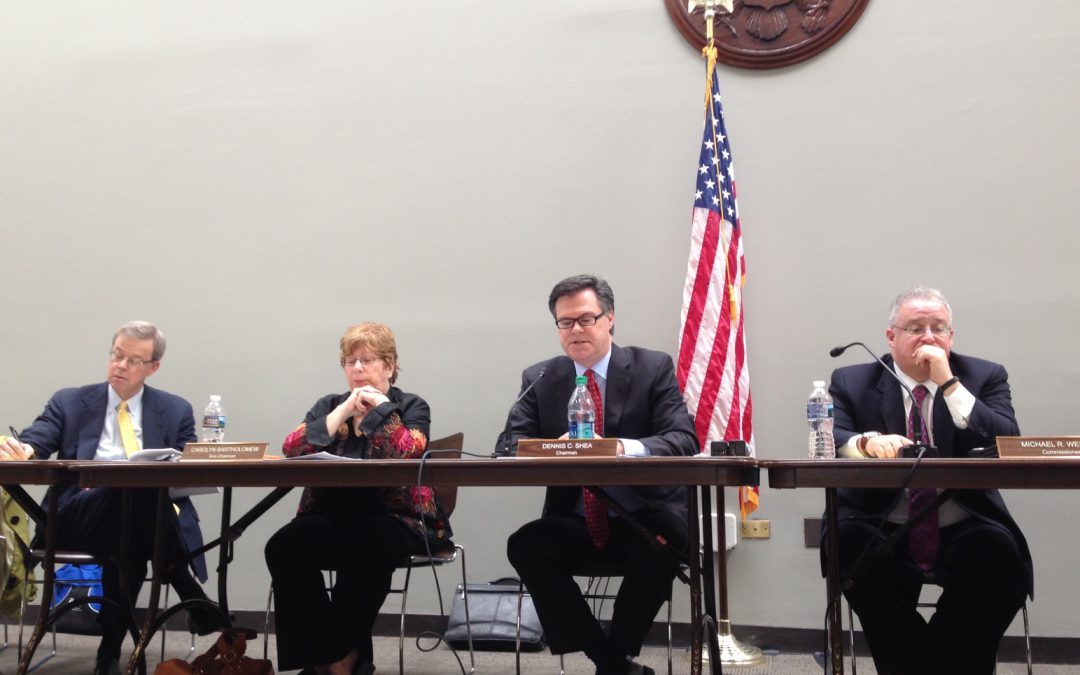 The U.S. China Economic and Security Review Commission made its recommendations to Congress about trade relations with China on Wednesday. (Michelle Kim/MNS)

WASHINGTON — The United States should bar Chinese state-owned enterprises from acquiring U.S. companies – takeovers that give China an unfair advantage in trade relations, according to a report released Wednesday by a congressional advisory panel.

While Chinese companies face less restricted access in the U.S., China has locked out countries from being competitive in its own country, according to the U.S. China Economic and Security Review Commission. The lack of market access for U.S. firms has created an unbalanced trading and investment relationship with China, which is harmful to U.S. interests, the commission’s annual report maintains.

The report says unfair market practices by China, including cheap steel imports, have cost the America manufacturing jobs in the steel industry. China’s protection of its domestic manufacturers, boosted by government subsidies, has led to overcapacity in its steel, aluminum and coal production and subsequent low-cost dumping of the goods on global markets. That makes it difficult for the U.S. to compete.

The notion that the U.S. is being outsmarted by China in trade relations between the two countries was a central theme of President-elect Donald Trump’s campaign. Trump said during his campaign he would take tougher stands in trade with China, mentioning imposing a tariff of 45% on imports.

Commissioner Michael Wessel said the new report “actually provides a pretty good premise for the incoming U.S. president who provides some alternate views from what we’ve been getting from the outgoing administration”

Commissioner Carolyn Bartholomew said in an interview she was encouraged that Trump raised the issue of trade with China “even if I can’t say I agree with all of his solutions.”

The commission, a congressional entity mandated to monitor trade relations with China, argued that China does not act purely on commercial interests but rather is driven by strategic considerations that may threaten U.S. national security. In particular, there are concerns about the increasing Chinese lean toward the U.S. semiconductor industry.

The “hollowing out” of the U.S. steel industry will force the U.S. to import components from China, which raises the possibility of “compromised” products entering the country that could pose a military threat, Bartholomew said.

The commission also raised alarms over the cumulative U.S. trade deficit with China, which reached $365.7 billion in 2015, the highest on record, according to U.S. Census Bureau numbers. In 2015, both private and public Chinese investment in the U.S. grew to a record $15 billion, according to the commission.

In its recommendations, the panel urges Congress to demand reciprocity in its trade agreements with China.

Former Sen. Byron Dorgan of North Dakota, who is on the commission, said in an interview the American response to increase in purchases by Chinese companies of U.S. assets as “timid.”

“Our government has been rather timid in dealing with the Chinese on the issues of reciprocity,” Dorgan said. “I’m suspecting that Chinese leaders wonder why they’re able to do this…We need to expect better treatment from China if we’re going to have strong economic competition. We have been afraid to push this because most of our trade policy is foreign policy, and we’re afraid to offend.”

At the end of this year, China will be under the review by the United Nations on whether it should be granted status as a market economy. The commission asserted Wednesday that China does not meet the UN standards for being considered a market economy.