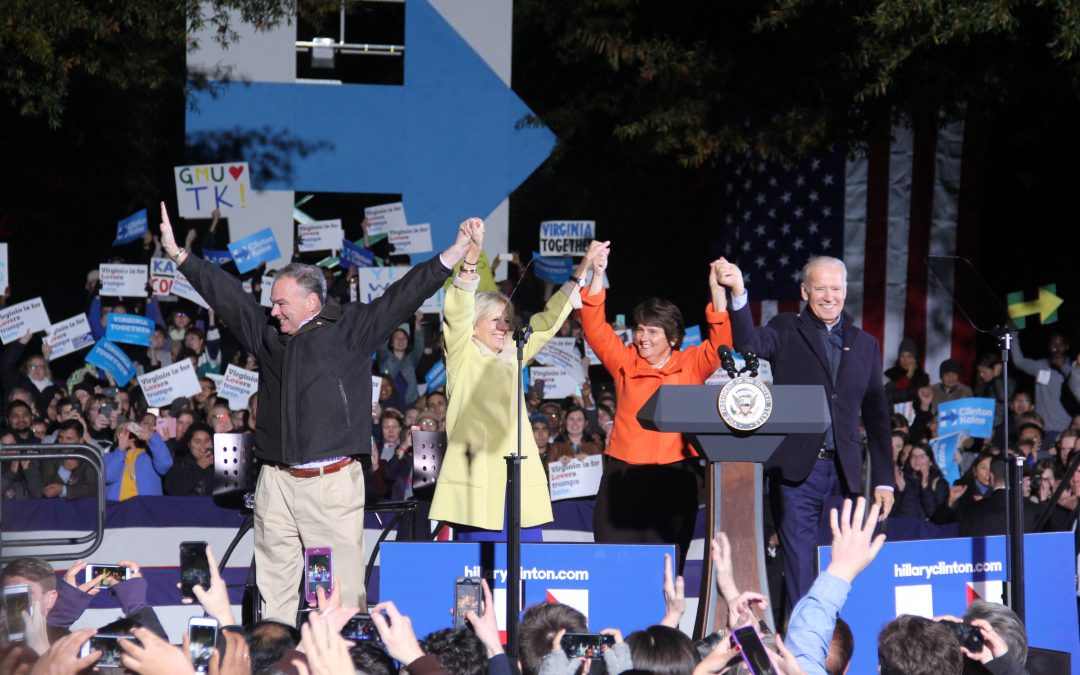 The Kaines and Bidens rally for one last time in Virginia before Nov. 8. (Eunice Lee/MNS)

FAIRFAX, Va. – Democratic vice presidential candidate Sen. Tim Kaine, on the eve of Election Day, reminded Virginians they have the power to be a part of history once again — this time by electing the first female president.

“History was made because of Virginia, not in spite of Virginia,” Kaine said, recalling that in 2008 Virginia voted Democratic at the top of the national ticket for the first time in 44 years, helping elect Barack Obama as the first African American president. “We have a chance to do that again in a powerful way.”

Kaine, former governor of the commonwealth and one-time mayor of Richmond, didn’t shy away from the dark chapters of a state that’s never far from its long and storied history. “We got a lot of scar tissue,” Kaine said at an outdoor rally at George Mason University, referencing the Civil War era. “You know Virginia’s history — the capital of the confederacy.”

Kaine and his wife, Anne Holton, were joined by Vice President Joe Biden and wife, Jill Biden, a professor at Northern Virginia Community College. Both Kaine and Biden predicted a strong turnout in Virginia would lead to victory come Tuesday evening.

In his remarks, Biden noted the particular divisiveness of the 2016 campaign between Decmoractic Hillary Clinton and Republican Donald Trump. But he called for unity after the election as the best way forward. “We have a responsibility not just to vote but to bring this country together when tomorrow is over,” he said.

Biden, who ran for president in 2008 and considered running this election cycle, also spoke about America’s future heading toward 2020.

He warned against complacency, telling the crowd “this great success of ours is not guaranteed. There’s nothing guaranteed about democracy – we have to earn it.” Taking the time to figure out why the electorate is fractured will be a priority, he said, particularly understanding why “a lot of people do feel left out” — a reality he finds holds true on both sides of the aisle.

“We’re going to be treating each other with respect starting tomorrow,” Biden said to an enthusiastic crowd of more than 750 people.

For Margaret Klein, a 60-year-old Virginia native, Kaine adds an important element to the Democratic ticket. “He’s a very thoughtful, considerate, intelligent man who supported preschool education as governor. I’m an educator and I am thrilled to have somebody in the White House who is a supporter of children,” Klein said.

Another supporter said Kaine’s strong ties to his religious faith are part of what make him appealing as a candidate. “I love Tim Kaine. I’m a Young Life leader and I like how his faith inspires him to work for people and love others,” said Mitchell Oertel, a 19-year-old student at George Washington University.