Why is Trump unusually popular in China? 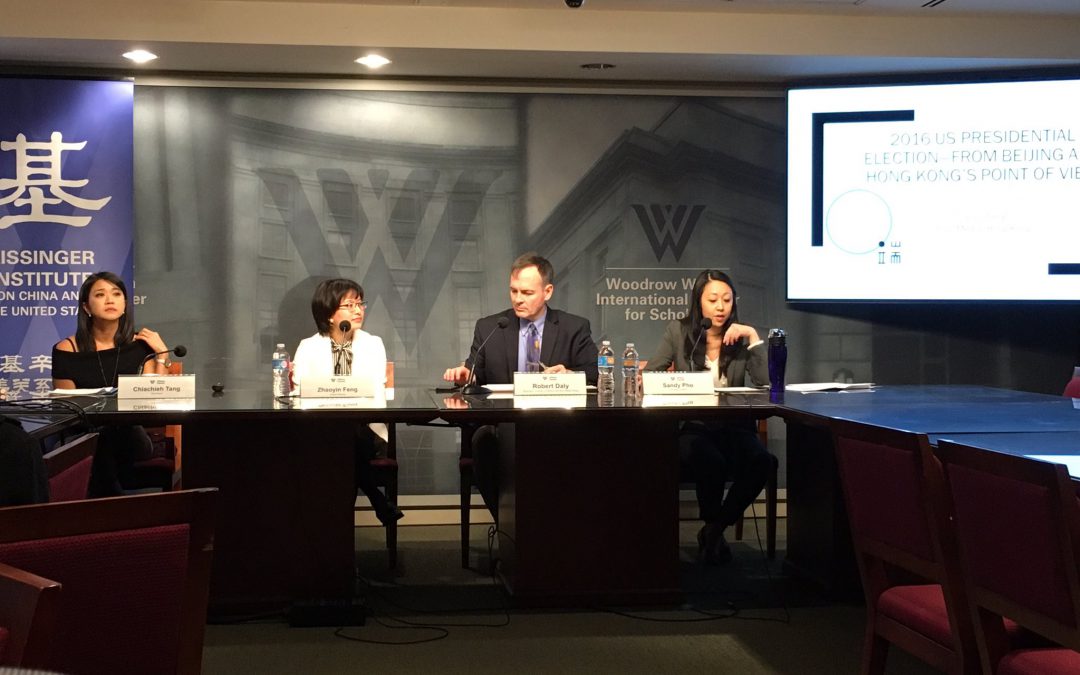 Journalists discuss the response to the presidential election from China, Hong Kong, and Taiwan at the Wilson Center (Evelyn Wang/MNS).

WASHINGTON – Chinese citizens viewed the victory of Donald Trump in the U.S. presidential election as an opportunity for China to increase its global power because they believe the president-elect will cause “chaos” in America, according to several China experts.

But the two journalists at Chinese and Hong Kong newspapers and K Kissinger Institute on China and the United States researcher also said Monday that the Chinese also enjoyed watching the campaigns – likening them to a TV reality show.

“Chinese viewers see this whole election process almost like a political reality show,” said Zhaoyin Feng, a reporter for Hong Kong-based Initium Media, which is banned in mainland China. “Some even commented that it’s more dramatic than ‘House of Cards.’”

The Chinese saw Donald Trump’s victory as a “chance for China to rise,” Feng said, which led to his “unusual popularity” in China.

Taiwanese journalist Chiachieh “Jane” Tang, who writes for Chinese news outlet Sina News, said that “the biggest selling point for Trump among Chinese is the chaos he brought to American society.”

According to Feng, the popular view in China is that “Trump’s presidency will undermine the U.S., which is good for China. The Chinese tend to see it from a view of competition. They will think the U.S. election is eventually none of my business unless it influences my personal interest.”

She said Chinese citizens viewed Hillary Clinton as a “hawkish” “antagonist” who “has the ability to stand up to an increasingly assertive Beijing.”

They liked Trump focus on U.S. economic development rather than geopolitics, she said.

Some citizens saw his win as a “triumph of democracy” proving that “political elites cannot control the election results,” Feng said.

But others and the state-run media cast the U.S. election as a failure of the American political system, Feng said.

State-run media has compared Trump’s rise to the ascension of Hitler and Mussolini, “emphasizing the dangers of democracy,” Tang said.

Kissinger Institute Director Robert Daly said Chinese media took Trump seriously, with an underlying assumption that “Trump in fact has fully formed, coherent policy and that he is strategic.”

But there has not been much acknowledgement on the limits of Trump’s power, Daly said.

“Trump is being written about almost as though he had (Chinese president) Xi Jin Ping-like powers to direct policy and to always be the top dog, which is not true,” he said.