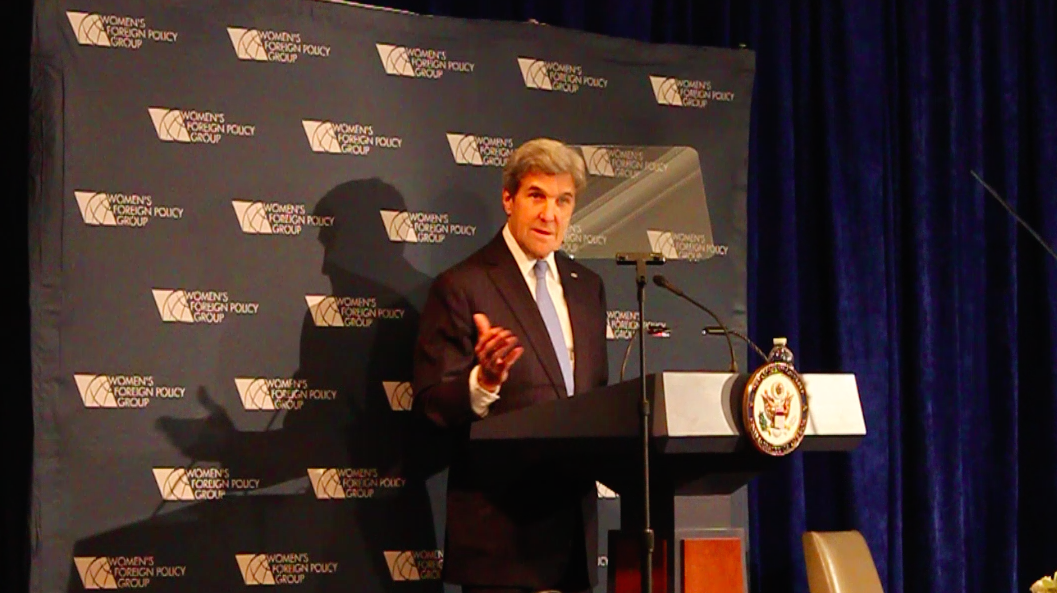 The debate over who will succeed Kerry as secretary of state rages on within the Trump transition team in New York.

Whoever Trump decides on will help determine the fate of the foreign policy legacy left behind by Kerry, a former Massachusetts senator and the 2004 Democratic candidate for president.

In Washington, addressing the Women’s Foreign Policy Group, Kerry vowed that he would remain engaged in fighting to uphold the Paris climate agreement and also keep working toward peace in the bloody conflict in Syria.

“We’re going to have one hell of a debate in the next few years, I can assure you,” Kerry said, “And I can promise you this…I will not go quietly into the night.”

Without mentioning Donald Trump’s name, Kerry seemed to take aim at the campaign promises made by the Republican, such as cancelling the Paris accord and the Iran nuclear deal. The world is safer is safer today as a result of the Iran nuclear deal, he said, and the coalition effort against ISIS.

In an indirect plea for Trump not to reverse the record, Kerry said “success doesn’t require a change in direction, but instead bigger strides down the road that we’re already on.”

More than just the fate of existing policies, the next administration will have to assess America’s role in global conflicts raging on in nations like Syria, Libya, and Yemen — unresolved situations which Trump has publicly lamented.

Publicly, Trump has held a more favorable attitude toward normalizing relations with Russian President Vladmir Putin, whose government has often clashed with the Obama administration. Kerry said he would like Russia to take steps that would lead the U.S. to lift sanctions that have led it into “the country’s longest recession in almost two decades,” calling the country’s economic problems “self-inflicted wounds.”

Kerry said it was important to be sensitive to the fears people have of globalization – a system many believe does not favor their interests. But he warned against misplacing the blame on international trade and turning inward, abandoning existing alliances.

“You tell me how the economy of the United States is going to grow if 95 percent of the world’s customers live in another country,” he said. “But we’re going to start knee-jerkingly just closing off some of that because we’re blaming other people?”

The nature of how both Trump’s campaign and transition process were run may be reason for concern, according to Elizabeth Saunders, associate professor of political science at George Washington University, said in an interview.

“What Trump has proposed is a massive change in American foreign policy,” Saunders said, “He’s not interested in maintaing U.S. alliances and so its nothing short of a radical change. If he was doing that with a full team and was ready to hit the ground running, it’d still be radical, but the fact he’s doing that now without a team is more worrisome.”

Acknowledging the uncertainty that has followed the election results, the secretary of state warned against aspects of promises made in the course of Trump’s campaign that Kerry said may challenge “democratic values.” International challenges he said can’t be confronted “with slogans and with little pithy tweets.”