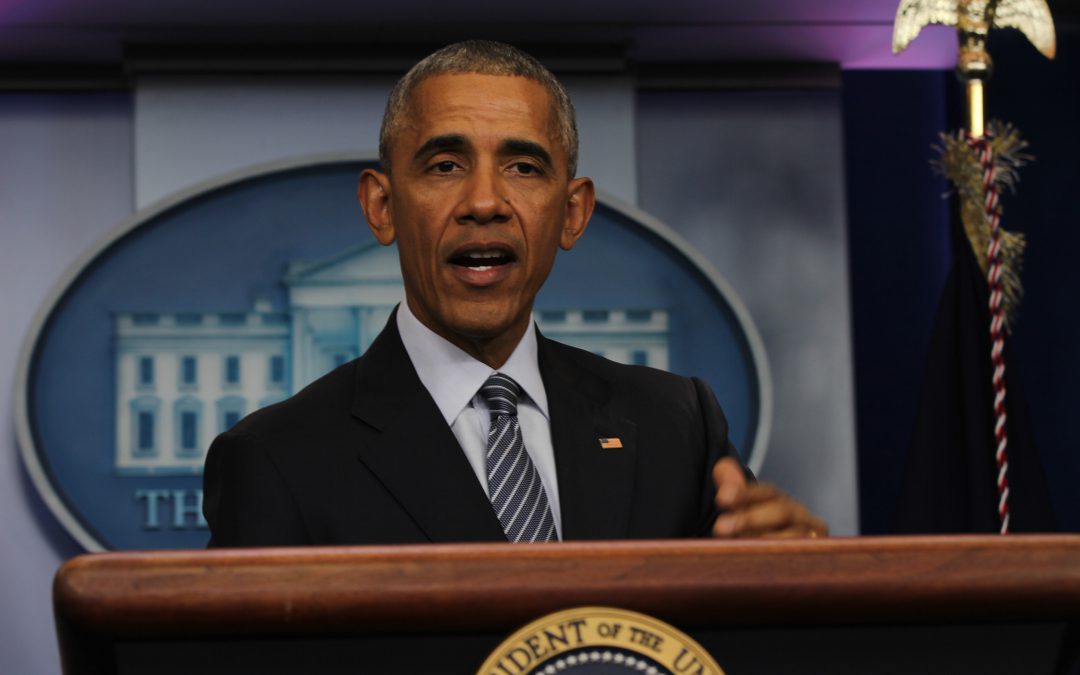 President Barack Obama speaks at a news conference in the Brady Press Briefing Room at the White House on November 14, 2016. (Michelle Kim/MNS)

In his first news conference since the election of Donald Trump, President Barack Obama downplayed  on  Monday concerns that the president-elect would undo international commitments.

Obama, citing a private meeting late last week with his Republican successor, said Trump is committed to a “strong and robust” NATO,  the North Atlantic Treaty Organization, and that the next president “expressed a great interest in maintaining our core strategic relationships.”  While the next administration will make changes, Obama said he believes that Trump will carry forward international agreements on global  security and trade.

“There is enormous continuity … that makes us that indispensable nation when it comes to maintaining order around the world,” Obama said, emphasizing also the importance of a united Europe to U.S. national security and broader global stability.

The news conference was held ahead of Obama ’ s final foreign trip as president to Greece and Germany, where he is expected to meet with German Chancellor Angela Merkel as well as the leaders of the United Kingdom, France, Italy and Spain. Obama will then head to Peru for this year ’ s Asia-Pacific Economic Cooperation conference.

“I think that one of the most important functions that I can serve at this stage during this trip, ”  said Obama,  “ is to let them know that there is no weakening of resolve when it comes to America ’ s commitment to maintaining a strong and robust NATO relationship and a recognition that those alliances are not just good for Europe, they’re good for the United States and vital for the world. ”

Trump was at times critical of the NATO alliance during his campaign , saying that it is too costly to the U.S., which pays a larger portion than other member states.

The president said he is committed to helping Trump succeed, that it is in the  “ best interest ”  of the entire country, though he also acknowledged that he had concerns about Trump’s policy views and some of the comments Trump had made during the campaign.

Obama said, too, that Trump was able to tap into the anxieties of many Americans during his successful campaign against Hillary Clinton. For instance, he said that while most Americans support free trade, they ’ re concerned about whether that’s fair to American workers as the world becomes more globalized. Trump ’ s victory, Obama said, demonstrated that some Americans fear new trade deals could drive down wages and force some companies to move some jobs overseas.

He conceded that failure of the Trans Pacific Partnership demonstrated rising anti-trade sentiment, but urged the new administration to say  “ yes to trade ”  instead of isolating the country from the global economy.

“ It continues to be my strong belief, ”  Obama said,  “ that the way we are going to make sure that everybody feels a part of this global economy is not by shutting ourselves off from each other, even if we could, but rather by working together more effectively than we have in the past.”

Citing his experience as president, Obama predicted that Trump will be  “ shaken up pretty quickly ”  when he realizes that some aspects of his campaign won ’ t  “ match up with reality. ” And he expressed hope that the weight of the presidency will force Trump to overcome his shortcomings.

“He has won. He’s going to be the next president and regardless of what experience or assumptions he brought to the office, this office has a way of waking you up,” Obama said. “And some of his gifts that obviously allowed him to execute one of the biggest political upsets in history, those are ones that hopefully he will put to good use on behalf of all the American people.”