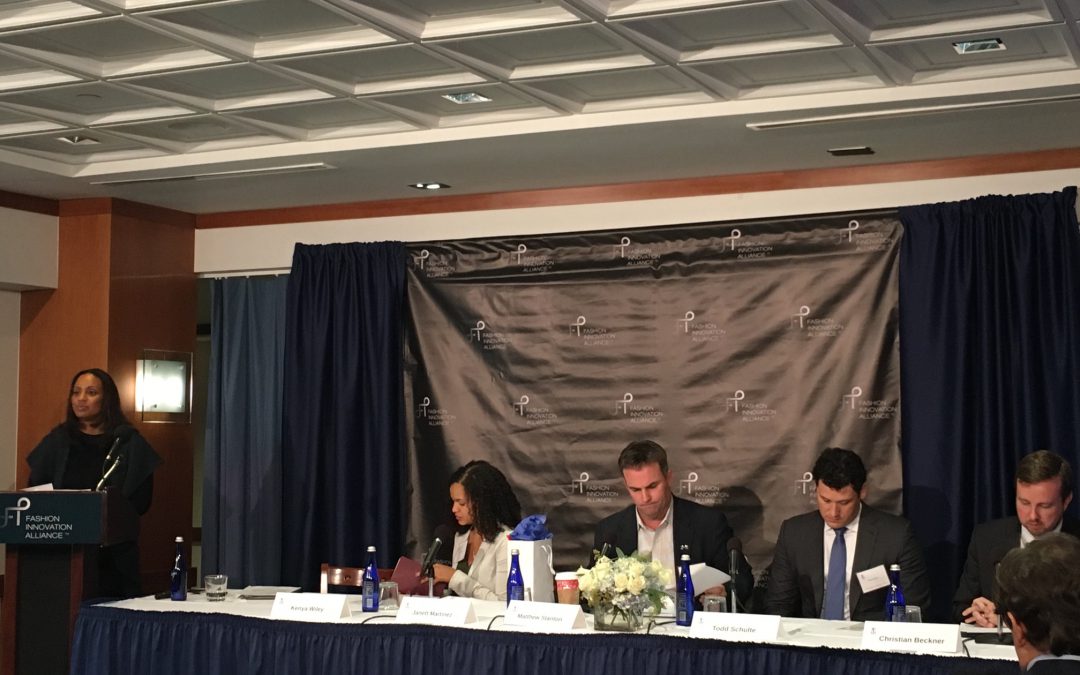 Experts and stakeholders discuss policy related to fashion and technology at a panel hosted by the Fashion Innovation Alliance. (Evelyn Wang/MNS).

WASHINGTON – Top fashion industry leaders said Wednesday that immigration policies will hurt their competitive capacity if they do not continue to allow robust legal immigration and protections for illegal immigrants because foreign-born entrepreneurs, creative talent and workers are crucial to the American fashion industry’s future.

“So much of the fashion industry is a story of immigration,” said Todd Schulte, president of immigration reform lobbying group FWD.us. “…The best global competitive advantage our country has always had is that we are a nation that welcomes immigrants and is a magnet for the best and the brightest.”

“If you think about any industry being told that 20 percent of their workforce can be removed, that would be likely devastating,” he said.

And it’s not just undocumented workers who may be in jeopardy without immigration reform, he said.

Most foreign-born high-skilled workers apply for an O-1 visa or a H1-B visa. The O-1 is reserved for foreigners with “extraordinary ability” in science, technology, engineering and math fields or the arts; there are no limits on the number of such visas.

The H1-B has a strict cap of 65,000 visas and 20,000 additional visas for “advanced degree exemptions,” which it reached less than a week after the application period began this year.

The Obama administration should push for more immigration reforms before President-elect Donald Trump is sworn in as president, Kenya Wiley of the Fashion Innovation Alliance, which represents fashion technology leaders in Washington policy discussions.

Schulte recommended that President Barack Obama finalize a proposal to make a two-year “parole period” for foreign entrepreneurs and prevent Trump from removing protections provided by the Deferred Action for Childhood Arrivals executive order, which allowed undocumented immigrants who arrived in the U.S. before aged 16 of who were under 31 in 2012 and have been here since 2007 to remain for two years and get work permits.

Another executive order, the Deferred Action for Parents of Americans and Lawful Permanent Residents, has been blocked from going into effect by a federal district court ruling last February.

Trump has vowed to “immediately reverse” both of Obama’s executive orders on immigration.

In his interview on CBS’ “60 Minutes” last Sunday, Trump more broadly revealed plans to deport undocumented immigrants who “are criminals and have criminal records,” whom he estimated to number up to 3 million. That figure has been criticized as too high.

In a speech in August, he vowed to keep immigration levels within “historical norms,” select immigrants based on likelihood of financial success and merit and “establish new immigration controls to boost wages and to ensure that open jobs are offered to American workers first.”

“We’ve been living under outdated immigration rules from decades ago,” Trump said. “To avoid this happening in the future, I believe we should sunset our visa laws so that Congress is forced to periodically revise and revisit them.”