EPA chief argues that clean energy is a public health issue; says Trump team has not contacted her about the transition 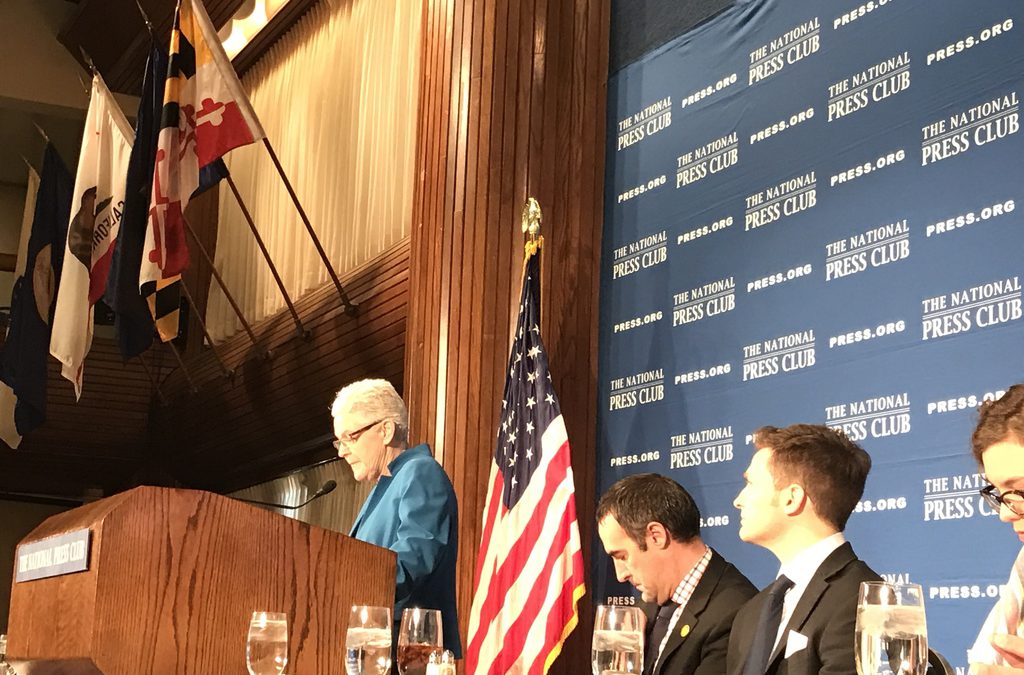 President-elect Donald Trump has vowed to dismantle the Clean Power Plan as well as other environmental regulations put in place by the Obama administration. He has also threatened to withdraw the United States from the Paris accords on climate change.

But McCarthy, the EPA administrator, said that Trump’s team has not contacted her about the transition process.

McCarthy added that the EPA’s work, especially the Clean Power Plan, is essential to the U.S. being a world leader in fighting climate change.

“The train to a global clean energy future has already left the station,” McCarthy said at the National Press Club.

The event was disrupted by two separate outbursts: a young woman interrupted to ask McCarthy about the EPA’s position on the anti-pipeline protests at Standing Rock, North Dakota.  And a middle-aged man, holding a bottle of brown water, yelled about the EPA’s clean water guidelines. Both were escorted out, the woman to applause from a few audience members. McCarthy said that Standing Rock was not “off our radar screen in any way.”

Throughout the Obama era, the EPA has focused on efforts to slow climate change.

McCarthy has overseen the Clean Power Plan, President Barack Obama’s signature policy, since it was proposed in June 2014. The plan, which aims to cut carbon dioxide emissions from coal-based power plants by 32 percent below 2005 levels by 2030, gave the United States leverage in negotiating the Paris climate agreement.

But the plan has been tied up in courts for years. Its legal standing rests with the Clean Air Act, but the 1990 law updating that act leaves room for interpretation.
The legislation, signed by President George H.W. Bush, has conflicting language leftover from the earlier versions passed by the House and the Senate. The case hangs on whether or not the federal government can regulate power plants for future pollutants (in this case, carbon dioxide) if it is already regulating them for other forms of pollution.

In February, the U.S, Supreme Court halted enforcement until a lower court upholds the plan or overturns it.  The U.S. Court of Appeals for the District of Columbia, heard the case in September.

Andrew Grossman is one of the lawyers representing the state of Oklahoma, one of two dozen states challenging the EPA, in its suit against the Clean Power Plan, said he does not expect the federal court to rule in favor of the plan. Grossman said Trump’s “obligation” would be to axe the Clean Power Plan on the grounds of federal overreach.

“That’s what you would expect and hope a Trump administration EPA will do,” he said in a phone interview.

But even if Trump scraps the Clean Power Plan, trends show that the energy sector is already getting green on its own — and is on track to meet and even surpass the standards set by the Paris accord.

According to a Sierra Club analysis of government data offered to Politico, U.S. power plants have already reduced their carbon emissions below the Clean Power Plan’s goal for 2024 and have nearly hit the mark for 2030, even without the plan’s enforcement.

“There is more going on in our world and our energy sector than the CPP can account for,” McCarthy said. “This president has stood up and said so clearly that a clean, healthy environment is not a luxury. It’s not window dressing, folks, it is a right.”

McCarthy said that she remains hopeful despite Trump’s anti-environment statements because of the impact of local- and state-level initiatives.

“There are thousands of mayors who have signed climate pledges,” she said.

McCarthy did not update on the EPA’s plans for the minimum volume of renewable fuels that U.S. transportation fuel must contain next year, which are required by law to be released by Nov. 30.