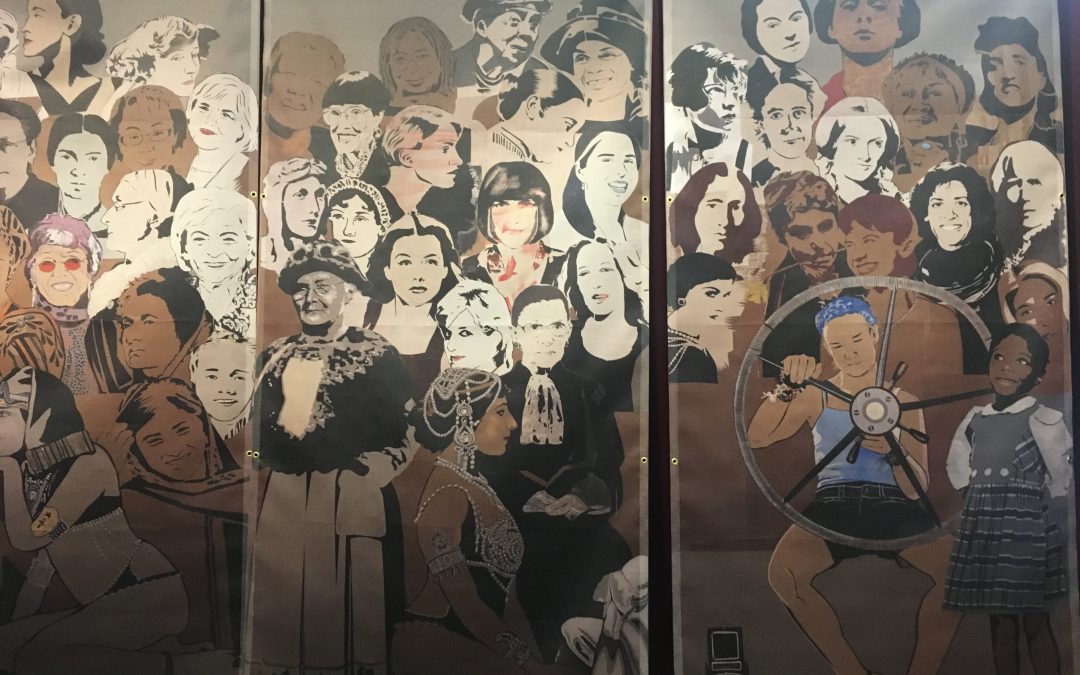 A mural at the unveiling of the report from the commission on the American Women's History Museum.

WASHINGTON — In mid-November, a congressional committee unveiled a bipartisan report recommending the construction of an American Women’s History Museum on the National Mall. But that museum will be missing what most expected to be its crowning jewel.

One week after the first female presidential nominee of a major party conceded the presidential election, dozens gathered in a room in the Capitol to hear the conclusions of the report.

Nobody mentioned Hillary Clinton or Donald Trump by name, but the election results hung over what had been expected to be a celebration of a significant achievement in American women’s history.

Democratic Rep. Carolyn Maloney, a co-sponsor of the bill that created the commission and who has pushed for the creation of a women’s history museum for over a decade, represents New York’s 12th district, which includes much of Manhattan–including Trump Tower.

“The new president-elect, one thing I know about him, he likes to build things,” Maloney said. “I can’t think of anything more important than to build a women’s museum on the Mall that will show America’s respect for women and for the significant contributions that American women have made to our country and the world.”

Rep. Jackie Speier, D-Calif., who has also co-sponsored legislation on the museum, said building the museum is especially important now.

“Women right now in this country are very concerned, and they will want to do things to make certain that the country is representative of women and that it will not be discriminatory against women,” Speier said. “There’s a great deal of concern about reproductive health, whether women are going to have access to contraceptives, and whether if the president-elect has his way, he reverses Roe vs. Wade.”

The museum commission’s report endorsed having a permanent women’s museum. It concluded that Congress should provide land on the National Mall for a museum, predominantly fund it from private donors and complete construction in 10 years. The report also suggested locations including the South Monument Site, an open piece of land across the Mall from the new National Museum of African American History and Culture, and the Northwest U.S. Capitol site across the Mall from the Botanical Garden.

“The excitement that is in this room is something so invigorating, especially at this time,” House Speaker Nancy Pelosi said.

Many of the eight commission members and congresswomen hoped to set politics aside, repeatedly emphasizing the bipartisanship of the endeavor. But crossing party lines can prove difficult, especially when the goal is codifying the history of women in America.

Since 1998, Maloney had been introducing legislation to authorize a commission to study the need for an American women’s history museum. In 2015, as part of a national defense bill, it finally passed.

The National Women’s History Museum, a private nonprofit founded in 1996, has spent the past decade lobbying for the museum. Museum officials formed an advisory council of women’s history scholars, including Georgetown University’s Bonnie Morris and the University of Maryland’s Sonya Michel in 2011. But quickly, many of the historians became concerned about the content created by the National Women’s History Museum organization.

“We were concerned about the quality of work they were putting up on their website and felt they weren’t being professional, but we were also deeply worried about the kind of history they were presenting,” Michel said. “They weren’t really reflecting the diversity of women’s history. It was a white women’s hall of fame.”

Morris remembers the fight as between those on the left hoping for a radical feminist museum that “wasn’t just first ladies’ ball gowns,” those on the right hoping to avoid glorifying the feminist movement and respect pro-life perspectives, and those in the middle attempting to appease everyone and create a museum plan that would get bipartisan support.

Frustration within the council grew, and eventually it was disbanded although the National Women’s History Museum continued its lobbying efforts.

The commission created by Maloney’s legislation in 2015 consulted an array scholars of women’s history. That commission was divided evenly between Republicans and Democrats, and the scholars from the council seem pleased with what the committee concluded.

But getting approval for the museum legislation from two Republican-controlled chambers of Congress and having it signed into law by Trump is hardly a sure thing.

Morris expressed concern that the new administration would not take up the museum as a project, especially after the Women’s March on Washington protest scheduled for the inauguration weekend.

“I don’t know if the idea of a women’s history museum on the Mall will be a priority right after an anti-Trump protest of women on the Mall,” Morris said.

Even if the museum is built, the fight about what to include in it will undoubtedly continue. Morris and Michel hope that issues like equal pay, women in the LGBT movement, and abortion will be included in the museum, even if they are controversial.

“We need to let people sort through positions and think critically,” Michel said. “I don’t think museums should be so didactic that there’s only one message presented. We should present all sides, and make it more interactive so it isn’t just presenting an object and telling people what they are supposed to think about it.”

Rep. Marsha Blackburn, R-Tenn., who was a co-sponsor of the legislation creating the commission, couldn’t attend the event announcing the commission’s conclusions. She was busy working with the Trump transition team.

This article published in conjunction with Sojourners.