Departing U.S. Ambassador calls on next administration to increase trade with Brazil 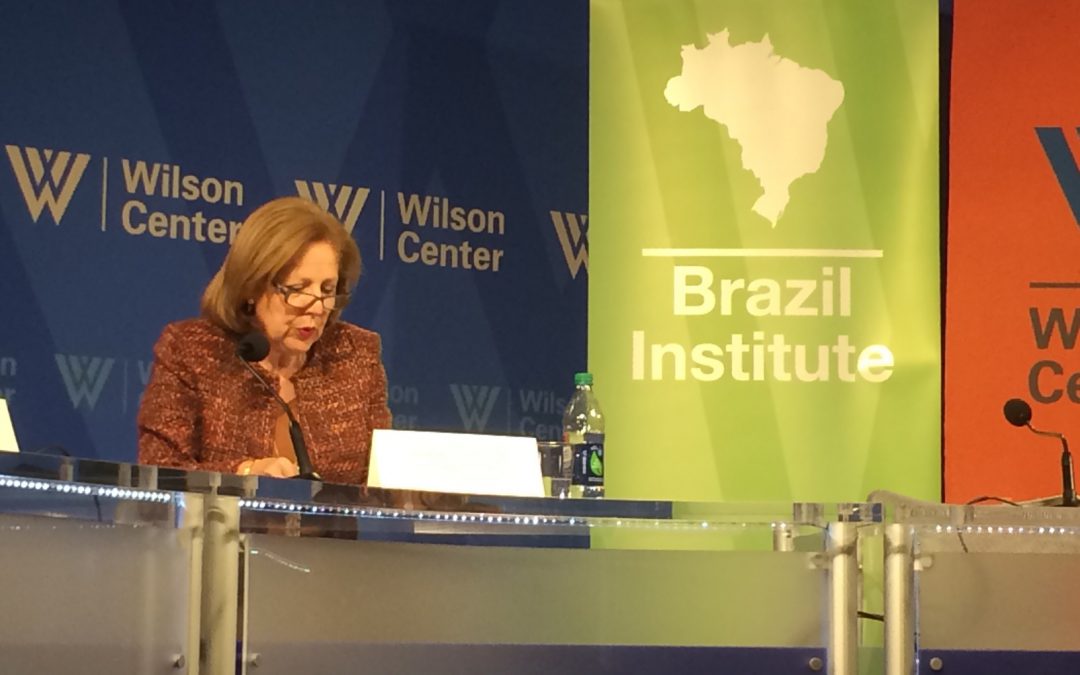 At her last public event as ambassador, Ayalde assured an audience Monday at the Wilson Center that she doesn’t believe the change at the White House will affect the strength of U.S.-Brazil relations.

“Brazil and the United States are too important to each other to let our relationship lie dormant, regardless of whatever is happening domestically,” Ayalde said during an event at the international affairs think tank.

In recent years Brazil has been dealing with economic recession and political corruption. Brazil President Michel Temer took office in August when then-President Dilma Rousseff was impeached and convicted of federal budget manipulation.

The ambassador said the fact that U.S.-Brazil relations have remained strong through Brazil’s political turmoil shows the strength of the connection. She said she was confident shared interests, values, and economic interdependence would continue to inform the relationship during the Trump administration.

Although policies on Brazil under Trump might change, Ayalde said she didn’t believe “these will markedly change the positive of our overall engagement.”

President Temer congratulated Trump the day after the Nov. 8 election, but the Brazilian government also called on the New York billionaire to protect free trade between the countries.

Trade was a cornerstone issue of the Trump campaign. Trump has said he will negotiate better trade deals for the U.S and impose trade tariffs on certain countries, namely Mexico and China.

Ayalde, a 30-year veteran of the Foreign Service, said a strong U.S.-Brazil relationship is critical for the American economy and jobs. According to the Office of the United States Trade Representative, in 2015, Brazil ranked as the U.S.’s 11th largest goods export market.

“There is a very pragmatic, objective, economic underpinning to our relationship. We are the two largest economies in the hemisphere and our trade and goods and services is around $100 billion a year, supporting hundreds of thousands of job in both countries,” Ayalde said.

In addition, Ayalde said climate change should be of strong mutual interest of both the U.S. and Brazil. She cited the U.S.-Brazil’s work as “joint leaders” on the Paris Climate agreement as major accomplishment in climate change.

“Our leadership will help protect the environment for generations to come,” she said.

When asked how Trump’s campaign stance on withdrawing from Paris Climate Agreement would play into the future of U.S. Brazil relations, she said the U.S. and Brazil “will continue to work on it (the agreement) until we are told otherwise.”

Reflecting on her time as ambassador, Ayalde said the signing of the Defense Cooperation Agreement and the start of the inaugural Brazil U.S. Defense Industry Dialogue in past September were major accomplishments for U.S. interests. Both the Agreement and the Dialogue allow for greater sharing of defense research and information, as well as promoting joint exercises and cooperation in international peacekeeping.

Ayalde said when she arrived in Brazil three years ago, relations were strained due to the Snowden leaks which exposed the NSA’s monitoring of then Brazilian President Dilma Rousseff’s communication networks. There were missed opportunities to engage further on economic, defense, and climate issues, she said.

Appointed by President Obama, Ayalde became the U.S. ambassador to Brazil on Aug. 1, 2013. Previously, she was the deputy assistant secretary for the Western Hemisphere, with a focus on Central America, the Caribbean, and Cuba.