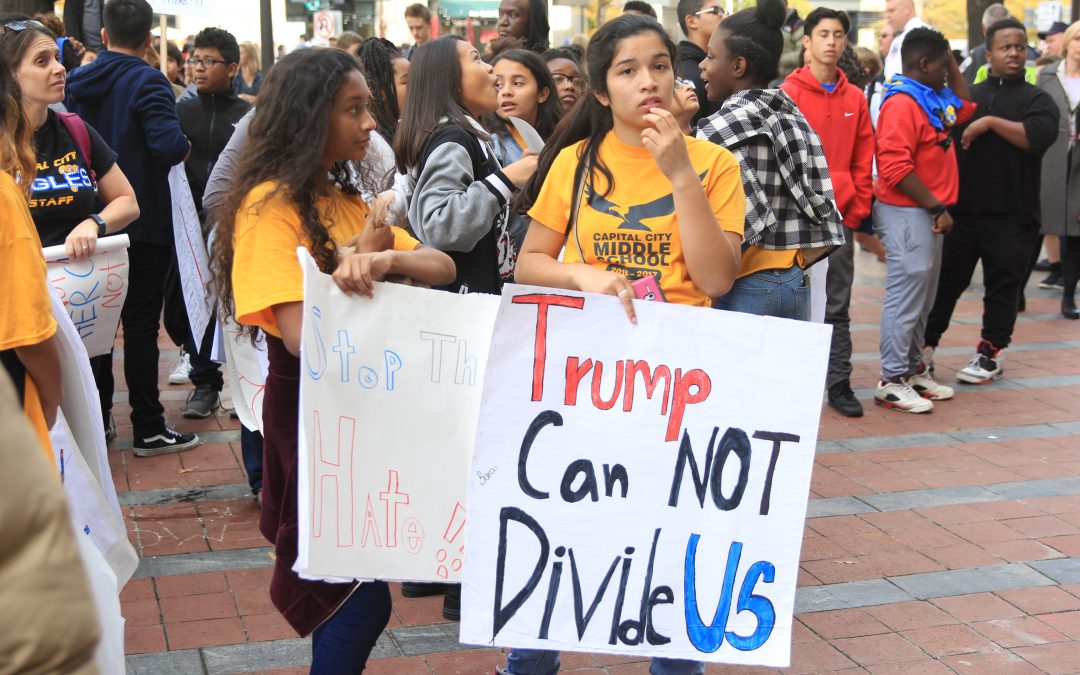 WASHINGTON – In the aftermath of Donald Trump’s election, protestors took to the streets of New York, Chicago, Los Angeles, Miami and other cities. But those hoping to make their voices heard during the inaugural parade in January will face obstacles.

Since 1980, the National Park Service has set aside the sidewalks near the White House and three-quarters of Freedom Plaza, an open area on Pennsylvania Avenue and 14th street, for the exclusive use of the Presidential Inaugural Committee (PIC). The remaining space in the plaza is left for the media, meaning that none is open to the public.

The Inaugural Committee also has bleachers along the Pennsylvania Avenue parade route that are open only to a pre-screened group of ticket buyers on Jan. 20, mostly donors and supporters of the incoming administration.

But the restrictions on protests are drawing fierce criticism from free-speech advocates over what they say is an unfair allocation of space. One of the displeased groups is ANSWER coalition, an anti-war group that stands for Act Now to Stop War and End Racism.

The U.S. Court of Appeals for the District of Columbia, heard arguments from ANSWER in November against National Park Service limits on protest for the big parade.

“This is simply not an authority that the government possesses,”  Mara Verheyden-Hilliard, attorney and co-founder of Partnership for Civil Justice Fund, told the court. “The National Park Service is giving authority to this private entity (the Inaugural Committee) to engage in viewpoint vetting – both in terms of the sale of tickets and access to the seats overall.”

The Partnership has been litigating the case since 2005 during the administration of President George W. Bush. The group’s lawyers, argue that the government is creating free-speech exclusion zones that violate the First Amendment and favor the voices of the incoming administration.

ANSWER wants the federal court to grant permission for demonstrators to be on Freedom Plaza and the sidewalk in front of Trump International Hotel – a space that takes on political significance with the new Trump administration.

But the government argues that some 84 percent of the sidewalks along the parade route – from the Capitol to the Whitehouse — will be open and available to the public.

“It is a government event and the government decides who sits on those bleachers,” said Marina Utgoff Braswell, an assistant U.S, attorney. “Demonstrators and members of the public have ample and prime opportunities along Pennsylvania Avenue during the inauguration celebration.”

Braswell also explained that the speech expressed from the bleachers is “government speech” — meaning that it is understood to be in line with the message the new president wishes to convey.    It’s an argument that went her way in January, when U.S. District Court Judge Paul Friedman ruled for the National Park Service. Friedman said that the inauguration parade is essentially “government speech,” meaning it is irrelevant whether the speech is one-sided.

The court case brings to question two different types of speech: the selection of speech – such as the distribution of tickets – and the maintenance of speech during the actual parade.

“I don’t know how the government can be in control of both of those,” said Judge Patricia Millet, one of three judges considering the case on the appeals court.

Post-election protests have put additional pressure on the case, now before the appeals court. Hillary Clinton’s popular-vote lead stands at more than 2 million, according to the Cook Political Report. She has about 64.2 million votes to Trump’s 62.2 million. On Sunday, Donald Trump, without evidence, claimed on Twitter that “millions of people voted ‘illegally”’ on Nov. 8, the election that he won.

ANSWER, the anti-war group, is also concerned about the Inaugural Committee itself, saying that it is given “unconstitutional authority” to determine who gets access to public space.

Little is known about the committee, led by Tom Barrack, a California private equity executive and founder of Colony Capital. Barrack is joined by several conservative mega-donors such as Sheldon Adelson and his wife Miriam, Wisconsin billionaire Diane Hendricks, and California venture capitalist Elliot Broidy. The committee, which raises tens of millions of dollars, does not disclose where the money goes, said ANSWER lawyer Verheyden-Hilliard.

With Inauguration Day looming, measures for peaceful protests have already been taken on social media. ANSWER’s Facebook page is organizing a “Protest at the Inauguration: Stand Against Trump, War, Racism and Inequality” for January 20. Organizers say nearly 10,000 people have already committed to attending. A separate women’s march is scheduled for the following day, with over 125,000 people on Facebook saying they plan to attend.

Anna Galland, the executive director of MoveOn.org, told The Guardian that she expects “mass peaceful protests with hundreds of thousands of people, if not millions, around the Inauguration and in other moments.”

Karimah Bilal, a communications spokesperson for the Washington Metropolitan Police Department, said that it’s too early to provide an estimate on the number of protestors. But like any inaugural parade in the past, security will be tight, particularly around the parade route.

“The election has not changed our approach to allowing people to exercise their First Amendment right or in our preparation for the Inauguration,” Bilal said in an e-mail.

On the government side of things, a memo from the Inaugural Committee, circulated Tuesday, outlined packages that big-money donors can choose from to gain special access to events. The tickets come in exchange for donations of at least $25,000, on up to $1 million. Events include a ladies luncheon, a ticket to one inaugural ball, and a dinner with Vice President-elect Mike Pence and his wife, Karen.

ANSWER is hoping for a decision from appellate courts before January 20, 2017.