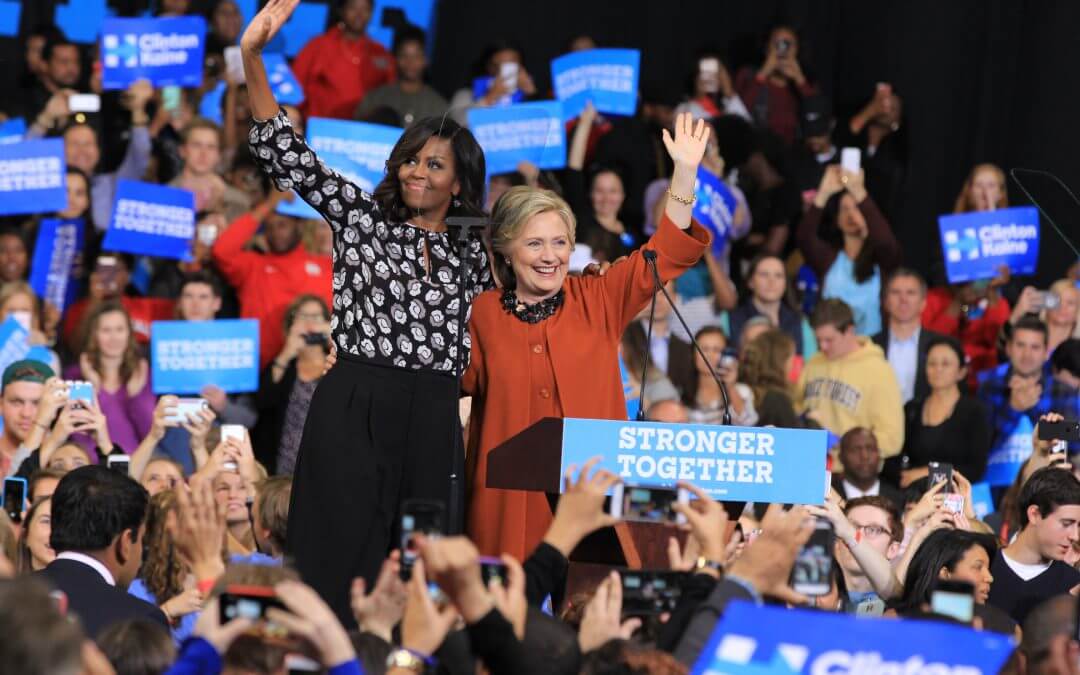 WINSTON-SALEM, N.C. — First lady Michelle Obama dismissed Republican presidential nominee Donald Trump’s allegations of a rigged election, saying Thursday that the outcome on Nov. 8 will be determined by the will of the voters. She urged Americans to ignore any efforts to suppress Election Day turnout.

“In this country, the United States of America, the voters decide our elections. They’ve always decided,” she said. “Voters decide who wins and who loses. Period. End of story.”

Speaking to a crowd of thousands, Obama joined Democratic presidential nominee Hillary Clinton at Wake Forest University, the first time the two have campaigned together. Although presidential historians and political strategists have labeled her unusually high involvement in this campaign unprecedented for a sitting first lady, Obama said her support is necessary in such an “unprecedented election.”

Obama said that the Trump campaign’s strategy is “to make this election so dirty and ugly that we don’t want any part of it” — a plan she believes is aimed at discouraging people from showing up to vote.

Clinton also emphasized the importance of voting in this election, saying that “so much of what we care about, so much of what’s at stake” — marriage equality, climate change, equal pay, to name a few — is on the ballot. At the rally, both Clinton and Obama honed in on the right to vote as a major issue.

In 2013, the Republican-dominated North Carolina state legislature approved a bill that imposed strict voting restrictions, such as requiring voter ID and ending same-day registration. The Fourth Circuit Court of Appeals overturned the law in July.

“Voting rights are at stake, and if you care about this sacred right … you’ve got to vote in this election,” Clinton said. “I hope after all North Carolina has gone through with the efforts to suppress people’s votes, you will turn out in the biggest numbers ever to say, ‘No, we demand the right to vote’.”

Obama praised the former secretary of state and two-term first lady for her experience — “more than Barack, more than Bill” — and for her hopeful vision for America. Clinton’s view of America, she said, stands in direct contrast with Trump’s vision of a country in “hopelessness and despair.”

Although the campaign has been divisive, the first lady said it is important to put aside party lines and recognize that this presidential election will affect how America is shaped for future generations. One way she connects with Clinton is over their shared experiences as first ladies raising children in the White House, she said.

“You start seeing the images of every child in this country in the face of your child,” Obama said. “That’s why every day we try to be the kind of people, the kind of leaders that your children deserve, whether you agree with our politics or not.”

Despite being a traditionally Republican-leaning state, North Carolina has been close in the past two elections. In 2008, the state turned blue for the first time since Jimmy Carter’s 1976 victory. It flipped back to the Republicans in 2012.

Clinton currently leads Trump by 2.4 points in the state, according to a RealClearPolitics polling average.

Obama called on the audience to vote early and volunteer for the Democratic campaign, saying a Clinton victory is dependent on people turning out to vote for her.

“I want you to remember that folks marched and protested for our right to vote, so I know you can get yourselves to the polls and exercise that right,” she said. “Make no mistake about it. Casting our vote is the ultimate way we go high when they go low.”