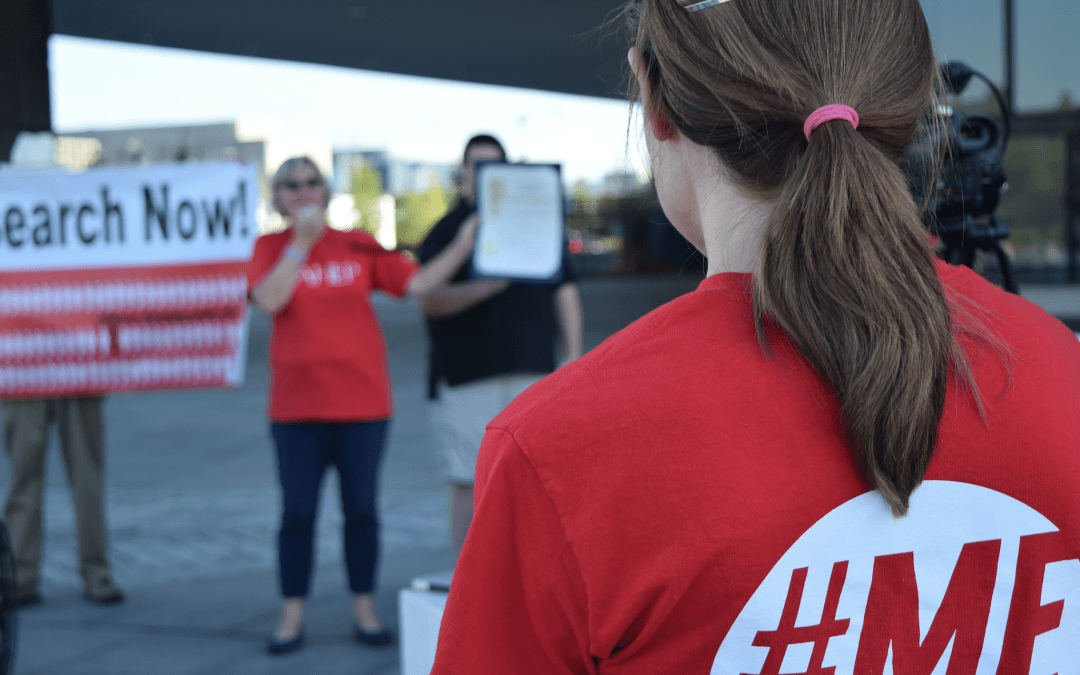 WASHINGTON — Protesters spread dozens of empty shoes in front of the Department of Health of Human Services Tuesday, symbolically representing those affected by Myalgic Encephalomyelitis, or Chronic Fatigue Syndrome, and unable to attend the event.

Loetta Vann, 59, held a megaphone to her lips as she began speaking.

“More than 375,000 Americans are so ill that they are confined to their homes for at least a portion of their illness, if not for the reminder of their lives,” said Vann, who is diagnosed with ME/CFS. “Yet we find ourselves virtually abandoned by the medical system without access to clinical practitioners who are appropriately educated to diagnose or treat us.”

Over 20 people were at the #MillionsMissing protest in Washington on Tuesday demanding the National Institutes of Health increase funding for ME/CFS research to $250 million annually from the $7 million currently allotted. They also want clinical trials and more medical education on the disease.

The effort was spearheaded by #MEAction.net, an international network of patients fighting for health equality for ME/CFS victims.  It is a complex multi-system disease that results in unrelenting exhaustion, debilitating sensory sensitivity, cognitive impairments, and muscle and joint pain.

The rally in the nation’s capital was part of a global day of action, with protests held in 10 other U.S. cities and nine other countries. In Washington, one by one, patients shared stories about when they were diagnosed and how ME/CFS has affected their lives.

In a February 2015 report, the Institute of Medicine noted that between 836,000 to 2.5 million Americans are affected by the disease, but many have not yet been diagnosed. Patients also face an annual financial burden of $17 billion to $24 billion, according to the institute’s report.

There is no cure yet for ME/CFS, and the cause remains unknown. Even so, the Institute of Medicine report stated that “remarkably little research funding has been made available” to study the disease.

“Historically, NIH has supported about $5 million in research on ME/CFS — it’s stayed at about that level,” said Dr. Vicky Whittemore, a program director who oversees ME/CFS grants for the National Institute of Neurological Disorders and Stroke. “I would hope that we can get to that level of funding [advocates] want, but it’s certainly not going to happen overnight.”

On Sept. 9, 55 congressmen signed a letter to NIH director Francis Collins, asking him to “consider in a timely manner” the input on ME/CFS research and research training in a Request for Information the agency received.

Whittemore, in a telephone interview, said the agency is working on ways to stimulate research and ways to build infrastructure and training.

“There was skepticism in the research community about what this disease was and how to study it,” Whittemore said. “We’re hoping that our efforts can turn that around.”’