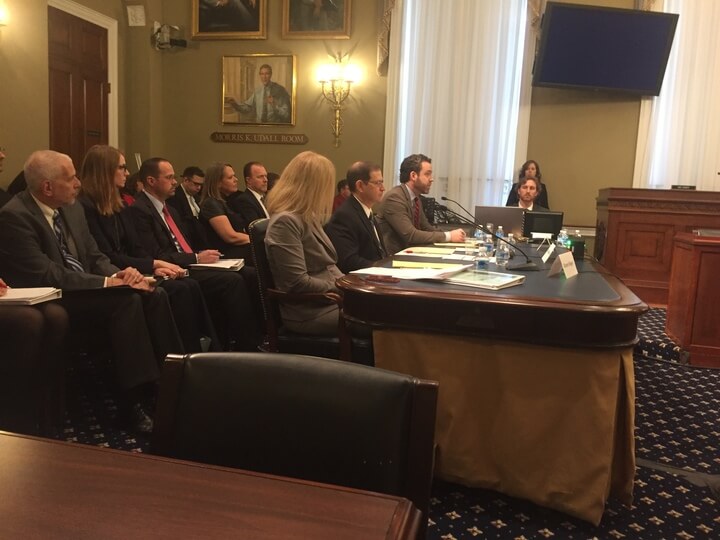 “We make it easy for oil and gas companies in this country,” said Rep. Alan Lowenthal, D-Calif. “We need to bring some balance to this equation. Our regulations have not been modernized in decades.”

The Obama administration has taken steps to deter drilling on public lands, including a three-year moratorium on federal coal leasing announced in January.

In April 2015, the Bureau of Safety and Environmental Enforcement proposed a well control rule, which aims to prevent catastrophic spills like the 2010 Deepwater Horizon explosion in the Gulf of Mexico by placing stricter design requirements and operating procedures on offshore oil and gas rigs. The agency wants the rule to go into effect before the end of September.

Wednesday’s hearing of the House Energy and Mineral Resources subcommittee was intended as a review of the proposed fiscal 2017 budgets, totaling about $1.64 billion, for the three bureaus that control federal fossil fuel leases, but it was used as a platform for Republicans to argue that the money is being spent on over-regulation of the oil and gas industries.

Republicans argued that not only are the regulations too stringent, but the federal government has been too hesitant to lease acreage for energy development.

Bureau of Land Management Director Neil Kornze responded that industries have failed to take advantage of leases his agency has approved.

“Last year, the (Bureau of Land Management) offered over 4 million acres in oil and gas leases, yet the industry only picked up 15 percent of that acreage,” Kornze said.

Democrats countered, saying the government should get a fair return for “commonly shared resources” and the environment should be protected.

“We have to be mindful of the obligation to protect and preserve these lands for future generations,” said Rep. Niki Tsongas, D-Mass.

But private oil’s production growth has more to do with the fact that landowners are often eager to allow drilling on their property because of the lucrative fees they receive, making them an easier target to increase drilling opportunities, said Charles Ebinger, senior fellow at the Brookings Institution in an interview.

“Subsurface mineral rights are usually owned by the landowner in the United States [so] there’s an incentive for everybody who has a small or big plot of land – ranchers, farmers – to encourage opening up their private land to developers,” Ebinger said.

Overall U.S. crude oil production has risen each year since 2010. Last year, the U.S. produced 9.4 million barrels per day, nearly 4 million more than it did five years ago.

Kornze said that crude oil production has more than doubled on lands where drilling requires a BLM permit. Federal policies may not be responsible for the improvement, however.

“It’s a matter of technology becoming much more efficient,” Ebinger said. “As the price of oil has come down, the industry has had to get leaner and tougher.”

Subcommittee vice chairman Louie Gohmert, R-Texas, made much the same point about technological improvements during the hearing, although in more colorful language. It’s “like a rooster taking credit for the sun rising.”