Ken Burns, Henry Louis Gates have a “conversation about race” 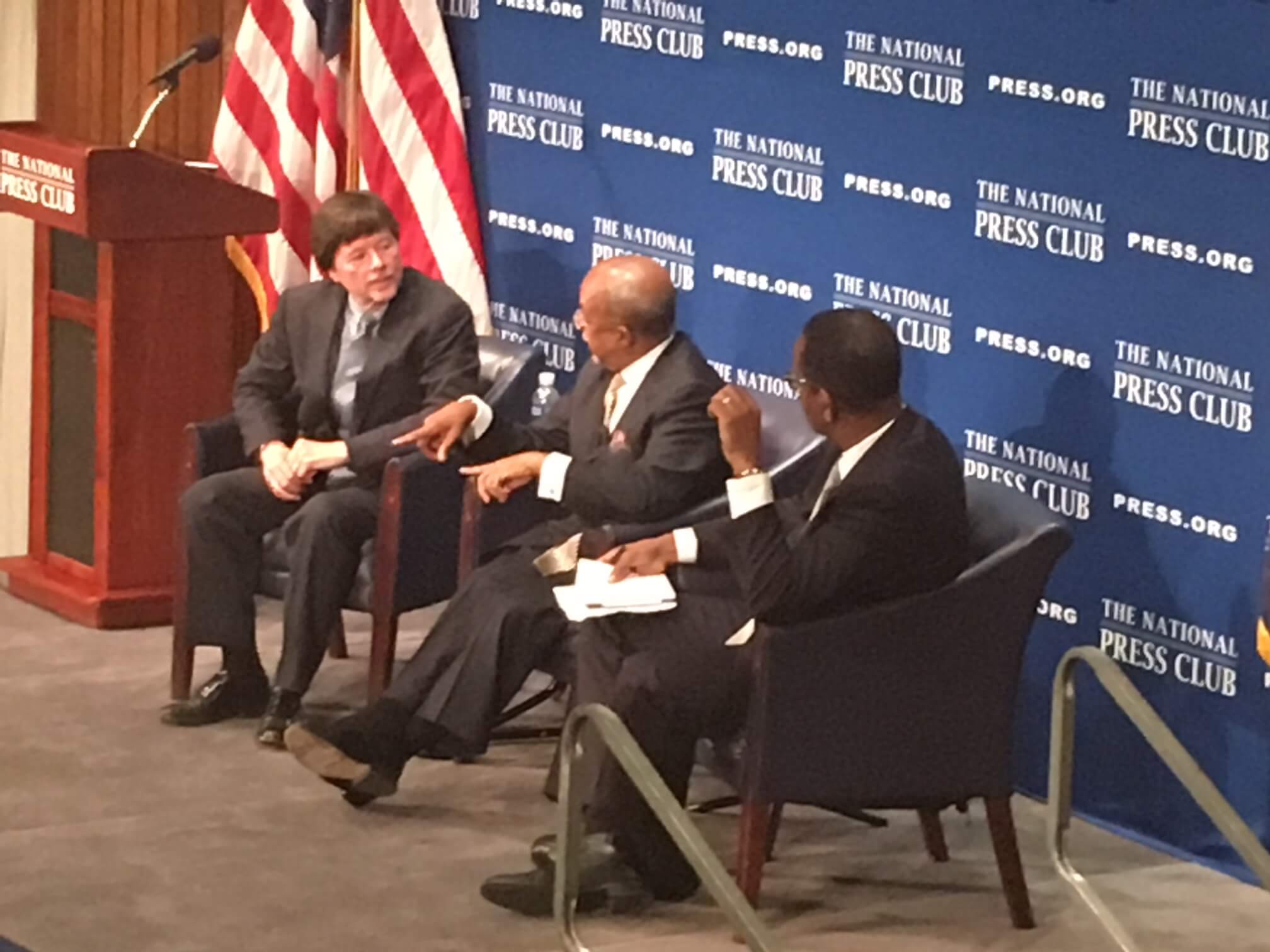 It was July 2009. Days earlier, the Harvard professor had returned home from China, where he was researching Yo-Yo Ma’s ancestry for a new documentary. When he got to his house in Cambridge, Mass., he found the front door jammed shut and tried to force it open. A witness saw Gates, who is black, and called police to report a suspected burglary. Shortly after, a police officer arrested Gates on his front porch.

It was a national story, with the 59-year-old academic at the center. And then, the hate mail.

“I was surprised how organized hate could be,” Gates said at the National Press Club on Monday.

But Gates and Crowley didn’t leave it there. They also shared a pint at Cambridge’s River Gods Bar, far away from the cameras and media scrutiny. They talked about race, they talked about fear. Gate said the officer told him he was terrified that someone would harm him or his wife in retribution.

“And it brought tears to my eyes,” Gates said. “Because I understand fear.”

The two men are friends now, Gates said. That’s what a “conversation about race” can do, at its best.

The filmmaker told the story on stage, sitting next to fellow documentarian Ken Burns, whose new film examines Jackie Robinson’s life and grapples with race’s role in American history.

They were at the National Press Club to talk about race, but instead of beer, attendees enjoyed a chic Washington lunch. Butternut squash lasagna, served on white china to audience members seated around white table-clothed tables.

For dessert, they nibbled on mini black-and-white cookies, a swanky take on the cake-like treats you’d find in delis around Brooklyn, the erstwhile home of the Dodgers, Robinson’s team. Other tables had cookies printed with a photo of Robinson, holding a bat aloft and wearing a white Dodgers jersey.

When they finished eating, the audience of about 200 applauded as Gates and Burns took the stage. A black man and white man both obsessed with unearthing and complicating history, the two began the hour with an appeal to nuance.

“It’s not just a black and white issue,” Burns said. “It’s very important to understand all these nuances so you can have a discussion that doesn’t just add fuel to the flames of our already divided rhetoric.”

Burns said Robinson’s life was far more complicated than his mythology suggests. Robinson, who broke Major League Baseball’s color barrier in 1947, has been “burdened by the barnacles of sentimentality and nostalgia,” he said, reduced to a “two-dimensional figure” that doesn’t capture the fullness of his life.

“It was possible for us to scrape away some of those barnacles,” Burns said. “It gets more complex, but it also gets more interesting.”

Burns said the film captures his whole life, a life lived through major historical moments: His birth in Jim Crow South in 1919, all the way through his death in 1972 as a black man who still felt left out of society. Studying the overlooked details and history, Burns said, will strengthen today’s conversations about race, a conversation that’s moved to the streets in recent years.

Indeed, the two noted how tense the country is in 2016, and the anger evident in some pockets of the country. They said businessman Donald Trump has risen out of that frustration and fear, channeling it into an unprecedented presidential run.

Gates, who grew up in the foothills of West Virginia, said many of his childhood friends are Trump supporters.

“He is speaking to a need and a deep set of fears in a segment of the American community,” he said. “You can’t mock the people who are frightened.”

He called for dialogue, a conversation with what he described as a disaffected, angry, mostly-white population, voters that support a candidate recently endorsed by a former Ku Klux Klan leader. Rather than resorting to ridicule or name-calling, Gates said Democrats and Republicans should discuss their differences and not succumb to their fears.

”We can’t just flush a whole segment of people down the sewer pipes of Western history. We have to bring them up, and we have to give them hope.”

How that happens, though, is unclear. As Burns pointed out, the country’s politics are polarized, the rhetoric is hostile, and compromise seems to have gone out of style.

“Americans like to think of themselves as uncompromising people, but we’re not,” he said. “Our true genius is compromise. And when it broke down, we murdered each other.”

The Civil War was the subject of one of Burns’ films, an 11-hour-30-minute epic that followed the U.S. through its bloodiest years. He likened the current environment to the stormy years before the war.

“We are now in a political environment where we celebrate no compromise,” he said. “That is the greatest threat to the United States: our unwillingness to bend.”

In this heated moment, Burns and Gates both agreed Americans are in the midst of “a new civil rights movement.” Its consequences won’t be known for years, but major change always starts with a conversation.

“The only way to create the world is to dream it and move into it,” Burns said. “If we can turn down the rhetoric, we have the opportunity to move forward. History makes you always optimistic.”