Has Sanders pushed Clinton to the left on energy issues? 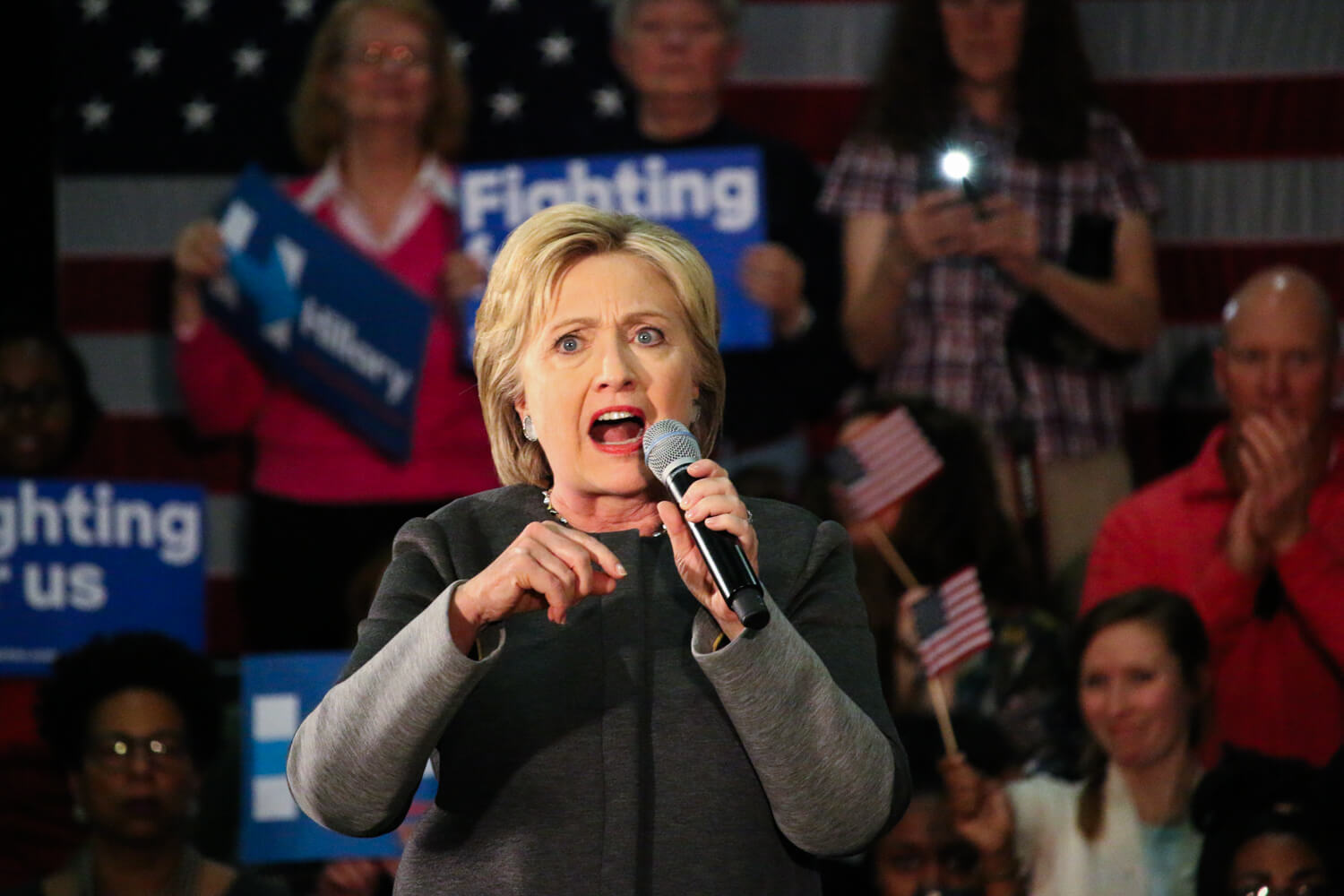 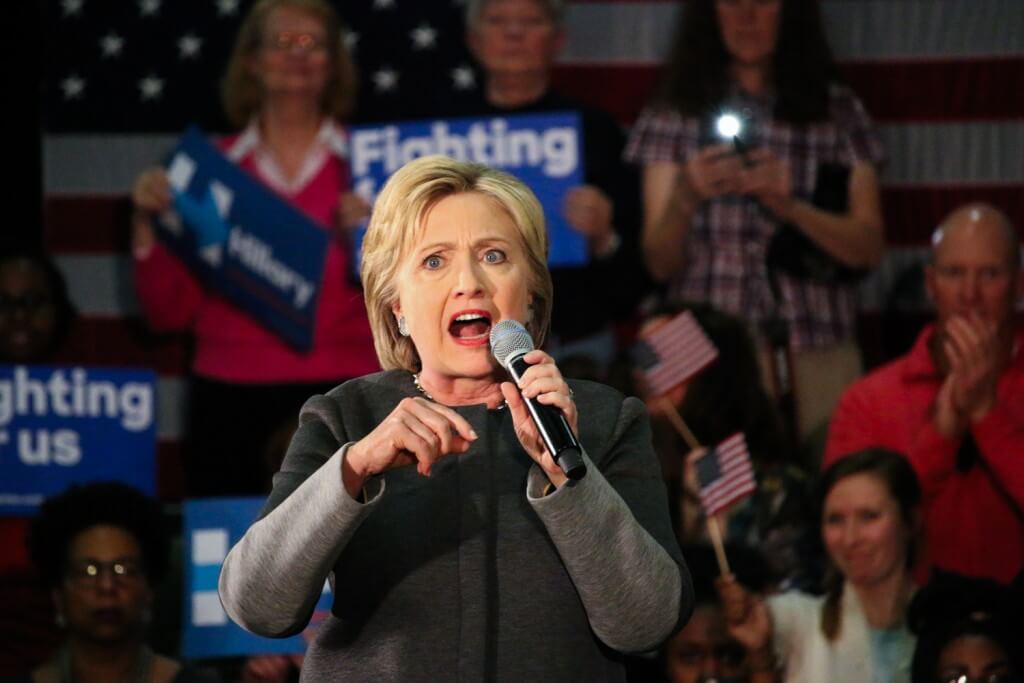 Clinton’s positions on the environment have shifted amid pressure from Sanders and primary voters. (Photo credit: Natalie Escobar)

During the Democratic presidential debate in Flint, Michigan, a student in the crowd asked candidates Hillary Clinton and Bernie Sanders one of the key environmental questions of the primary campaign: Do you support fracking?

Many environmentalists oppose the controversial method of extracting natural gas from underground shale because they believe regulation cannot prevent hydraulic fracturing, or fracking, from leaking methane or contaminating groundwater.

Supporters say fracking boosts the economy by providing jobs and reducing dependence on foreign oil, leading to cheaper gas prices at the pump. And, some argue, there is little evidence that fracking pollutes nearby water sources.

Former Secretary of State Clinton, responding to University of Michigan student Sarah Bellaire, said she could support fracking only if local and state governments first gave their approval and she was assured no environmental harm would occur. And companies must be transparent about the chemicals they use, she said.

“By the time we get through all of my conditions, I do not think there will be many places in America where fracking will continue to take place,” Clinton said at the Sunday night debate.

Sen. Sanders responded quickly: “My answer is a lot shorter. No. I do not support fracking.”

While Sanders wants to ban fracking, Clinton does not oppose it if certain strict conditions are met. Voters might not care enough for the difference to matter, however.

“I don’t think most Americans even know exactly where oil is drilled or coal is dug,” said Sandra Davis, a political science professor at Colorado State University who studies energy politics. “That’s a pretty minute thing. You may know that you want cheap energy, you may know that you hope it’s clean, but I don’t think most voters are real familiar with exactly the difference between drilling on public land and private land.”

Environmental issues have taken a backseat to national security, gun control and the economy during the Democratic primary campaign. And as Clinton has amplified her views on key concerns, the gap between her and Sanders’ positions on climate change and energy issues has narrowed.

“When you look at Sanders, when you look at Clinton, they’re really a whole lot more alike than they are different,” Davis said. “It’s really more a matter of style or a difference in their basic theme that separates the two, rather than specific issues or positions.”

Within a five-week span last fall, Clinton said she did not support Arctic drilling because it’s “not worth the risk” (one day after the Obama administration approved drilling for oil and gas in the Arctic Ocean), then came out against the Keystone XL oil pipeline. Sanders has left no ambiguity about his attitude toward Arctic drilling and Keystone, announcing his opposition to both from the start.

The pipeline would carry oil from Canada’s oil sands to Nebraska, creating jobs while possibly prompting more fossil fuel extraction, which environmentalists argue would accelerate global warming. Keystone has become the hallmark issue of the energy debate, epitomizing the dispute about whether to prioritize protecting the environment over jobs and cheap energy.

Sanders and former Maryland Gov. Martin O’Malley pressured Clinton for months to take a firm stand on the pipeline. In 2010, as secretary of state, while speaking at the Commonwealth Club in San Francisco, she said the administration was “inclined” to sign off on the pipeline, but later backtracked.

Her delay in announcing a position may not have been a product of indecision, however.

“It’s possible that as former secretary of state, she wanted to wait until the administration had made a decision,” said Matt Dallek, a professor at George Washington University’s political management graduate school. “I’m not saying there’s no calculation there on her part as well. In the Democratic primary, I don’t think she would have a whole lot to gain, especially when she’s being challenged from the left, by coming out in favor of Keystone.”

Sanders, along with O’Malley when he was still in the race, has changed the Democratic conversation on energy and the environment by proposing progressive reforms and ambitious goals. He wants a more than 80 percent decrease in carbon emissions from 1990 levels by 2050 and would seek to impose a revenue-neutral carbon tax.

But a Clinton aide said she is not late to the party. She has fought for clean air and water and against fossil fuel interests for decades. As a senator, she helped lead a successful bipartisan battle against drilling in the Arctic National Wildlife Refuge, the aide said, and as secretary of state laid the groundwork for the Paris climate agreement, which Sanders criticized harshly before it was finalized.

Sanders indeed criticized the Paris agreement – for not going far enough. He said it does not provide the “bold action” needed in the very near future.

Clinton may not admit it, but Sanders, her democratic socialist opponent, and an electorate that leans further left than voters in November have nudged her leftward on environmental issues. For instance, one day before the New Hampshire primary when polls indicated Sanders held a double-digit lead, Clinton said she would ban drilling off the Atlantic coast.

“She was waffling on a few issues before [Sanders] became a serious threat. She’s now taken firmer stands on a more pro-environment side, and I think that’s in response to Bernie Sanders doing so well,” said Eric Smith, a political science professor at the University of California, Santa Barbara. “But it’s also in response to primary voters who are demanding more change – it’s not just Bernie.”

Echoing that sentiment, Davis said the primary and caucus system – attracting activists in both camps – tends to push candidates to more liberal and conservative positions.

“It’s not surprising to me that [Clinton] was basically not picking very strong positions until last summer and fall,” she said.

But whatever the underlying cause, Clinton and Sanders’ environmental positions may be too similar to influence the electorate in the remaining primaries.

In October, Clinton announced she opposes the Trans-Pacific Partnership, a trade agreement that environmentalists dislike because it allows corporations to sue foreign governments for environmental regulations that are unfavorable for business. But in 2012 while still part of the Obama administration, she called the pending trade agreement a “gold standard” for open, free and transparent fair trade.

That turn-about, combined with Clinton’s coming out against Arctic drilling and Keystone, has deprived Sanders of an opportunity to paint her as soft on environmental issues. His recent attacks have focused on Clinton’s unwillingness to oppose fracking outright and her ties to big oil through campaign contributions.

Five days before the Iowa caucuses, Clinton attended a fundraiser at the headquarters of a company that invests in fracking operations. Lobbyists and executives from Chevron and ExxonMobil have raised money for Clinton’s campaign.

“Just as I believe you can’t take on Wall Street while taking their money, I don’t believe you can take on climate change effectively while taking money from those who would profit off the destruction of the planet,” Sanders said in a February press release.

But Clinton’s support from oil and gas companies is unlikely to influence her policies if she becomes president, political scientists Davis and Smith said, because politicians can, and routinely do, act on their conviction, not that of donors, once assuming office.

“I doubt that,” Davis said of any suggestion that oil donations would compromise Clinton’s positions. “I think that’s the way a lot of Washington politicians do business. If you look at her past record, you get a better sense of what she’ll do.”

Dallek said the environment is simply too low on the list of issues voters care about to decide the outcome of an election.

“For all of the white hot attention that was focused on Keystone leading up to the administration’s decision to quash the pipeline, it really has died down,” he said. “So, to the extent that [Clinton] has vulnerabilities, I don’t see environmental politics and policies being one of them. I think she’s much more vulnerable on questions of trust and who you think is going to fight for the issues that matter most to you.”