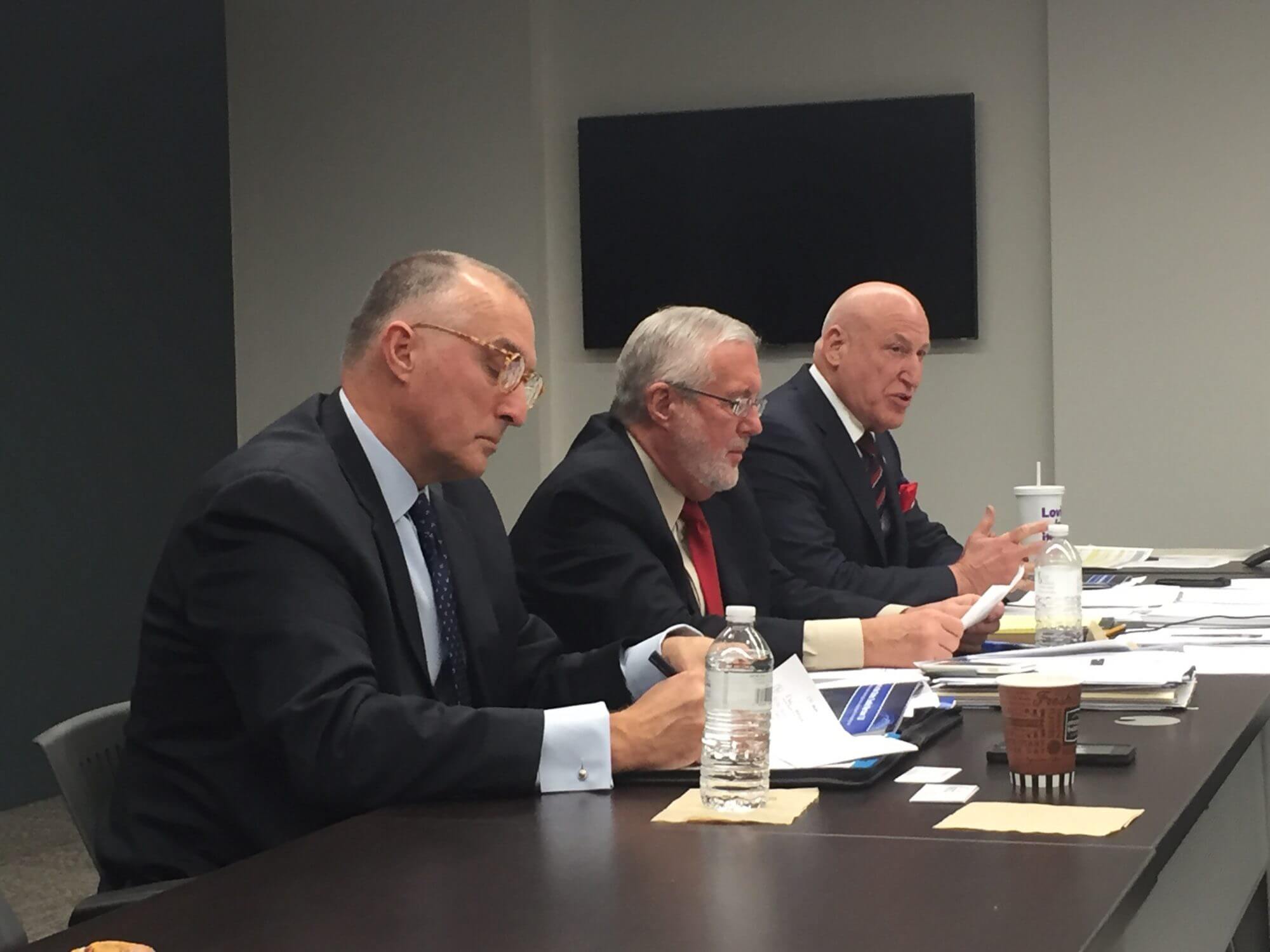 Special Committee on Nuclear in the States leaders Edward Kee, Peter Lyons and Donald Huffman (l. to r.) discuss the benefits of investment in nuclear energy.

WASHINGTON — The U.S. could lose its position as a global leader in nuclear energy if it continues to close plants and fails to open new ones, leaders of a nuclear advisory committee said on Monday.

The United States operates 99 reactors at 61 commercial nuclear power plants, far more than any other country, but the industry has slowed in recent years.

Three nuclear power plants ceased operation in 2013 and another, the Vermont Yankee plant (which at one point accounted for 35 percent of Vermont’s electricity consumption) shut down in 2014.

In an effort to reverse the trend, the American Nuclear Society, a nonprofit organization that represents corporations and government agencies, has established a Special Committee on Nuclear in the States to advise state policymakers on “the benefits of new and existing nuclear energy facilities.”

The panel, co-led by Peter Lyons, a former assistant secretary for the Energy Department, wrote a 36-page report released Monday with a range of nuclear energy options for states to use in Clean Power Plan compliance strategies. Nuclear power plants emit and store harmful nuclear waste but do not discharge greenhouse gasses such as methane and carbon dioxide.

Nuclear waste remains a concern. William Martin, a professor at the University of Michigan’s Department of Nuclear Engineering and Radiological Sciences, said radioactive waste disposal and the safety of the plants themselves are the major stumbling blocks surrounding nuclear energy.

“An accident like Fukushima (where a tsunami caused a major nuclear disaster), storing of the waste, and any issues associated with either one could lead to radiation exposure, which is what people really are afraid of,” Martin said in a phone interview.

President Barack Obama‘s administration introduced the Clean Power Plan in August 2015 as the centerpiece of its emissions-reducing strategy. The plan directs states to create their own blueprints to meet target emissions goals, which the nuclear committee’s report hopes to influence.

“We fully recognize the solution that works for one state may not work for another,” said Lyons, an energy agency official in the Obama administration. “The toolkit (report) isn’t a single suggestion. It isn’t a single solution. Instead, it presents a range of goals, some easier to implement that others, which could be considered at the state level.”

The report argues that state governments should subsidize nuclear power plants because the economic and environmental benefits of keeping them running exceed the costs.

“The nuclear community is not asking for any special favors, it’s not asking for anything unique,” said Donald Huffman, president of nuclear consulting group Excel Services Corporation and a co-leader of the committee. “It’s asking for a level playing field (with other energy sources) which currently it does not have. And as a result, the value of nuclear is inappropriately and unfortunately undervalued, and as a result we are not able to economically compete in [some] regions.”

Along with grants to economically threatened plants from state governments, the report recommends a new set of state and federal tax credits for new and existing nuclear power plants. It also suggests changes in how states regulate nuclear power, including a controversial proposal that would allow a utility to charge customers higher rates to cover construction costs of a reactor even before the reactor is built. States such as Georgia and South Carolina have enacted this policy.

Though the U.S. relies on nuclear power for a little less than one-fifth of its electricity, those on the committee believe the industry is threatened by other energy sources, in part because nuclear is expensive

“The larger context is the increasing partisanship (on Capitol Hill),” said Andrew Paterson of the research company Environmental Business International. “We want to move in the other direction and broaden the dialogue of potential policy options, and we think the states are the best laboratory for experimenting some new approaches, particularly since there is no single policy that’s going to keep all the nuclear plants running.”

Monday’s report is the first installment of a larger study, which the American Nuclear Society will release later this year.