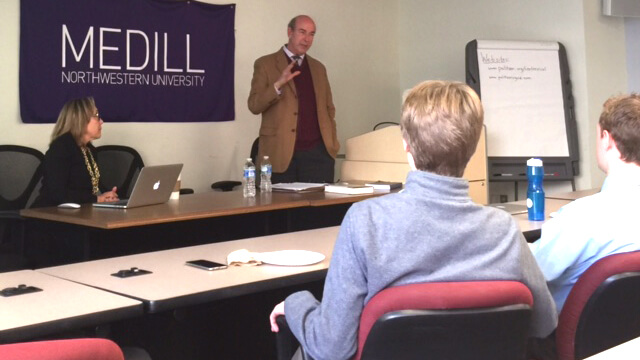 “These stories aren’t frozen in gold. They come alive–and you can see where they come from,” Roy J. Harris, Jr., veteran journalist and Medill alum (’71) told a group of students at the Medill Washington, D.C. newsroom on Thursday as part of a series of events marking the 100th anniversary of the Pulitzer Prizes, one of the top awards in American journalism.

The stories Harris is referring to are chronicled in the latest edition of Pulitzer’s Gold in which Harris examines the behind-the-scenes events of news organizations and reporters who uncovered some of the biggest stories of the 20th century, including The Washington Post investigation of the Nixon-era Watergate scandal (1973).

The anecdotes in Pulitzer’s Gold are “compelling threads, where the reader pulls them apart to see where they lead,” Harris told a group of about two dozen undergraduate students as he shared stories of routine reporting by big and small newspapers that led to stories that later struck Pulitzer’s gold.

Joseph Pulitzer, publisher of the St. Louis Post-Dispatch and the New York World, created the outline for the awards in his will. The Pulitzer Prize eventually became reality with 14 of its 21 categories honoring journalism. Since 1917 Columbia University has awarded the prizes on the recommendation of the Pulitzer Prize board, which selects successors from those who depart, usually after serving a maximum of three, three-year terms..

Harris, a former reporter of the Wall Street Journal, among other media organizations, was inspired to log Pulitzer Prize history upon discovering that the reporters at the Post-Dispatch, where he started his career as a teen fetching coffee during summer vacations, knew very little about their paper’s award-winning journalism. Several of its investigations received the coveted public service award.

“Since a 1982 freelance photo, the Post-Dispatch hadn’t won,” Harris said. “I would describe [the employees] faces as ones with bewilderment about this information. They didn’t know where some of the prizes had gone.”

Harris’ father even played a role in the mid-western newspaper’s prize-winning history. As a reporter for the the Post-Dispatch, Roy Harris, Sr. contributed to several of the paper’s Pulitzer-winning reports, including a 1950 public service award shared with The Chicago Daily News for reporting that revealed a national press scandal involving 37 Illinois newspapermen on the state’s payroll after they printed out handouts given to their publications by the state.

“I was only 4 years old at the time,” Harris said. “I would later on become a copy boy and bring some coffee to Joseph Pulitzer III and write for the Post-Dispatch myself.”

Other stories that won the public service award include Boston Globe reports uncovering child abuse by Catholic priests (2003) and the Pentagon Papers (1972) published by The New York Times.

This year the Pulitzer Prize nominees and winners will be announced on April 18. In honor of the 100th anniversary of the awards, Medill School of Journalism on May 6 will host a symposium to celebrate and examine journalistic work that serves the public interest by shedding light on societal problems.