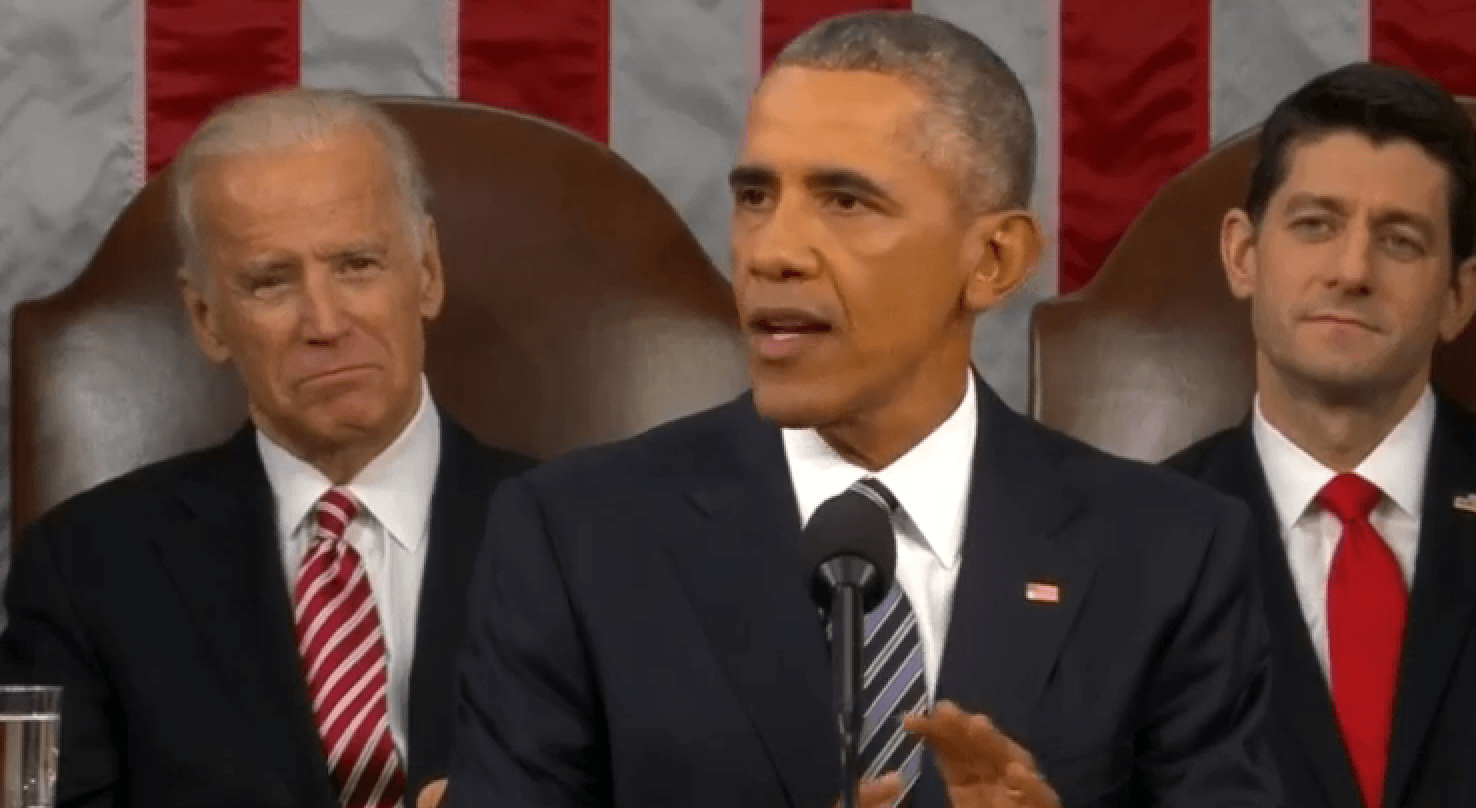 President Obama during State of the Union 2016. (Screengrab, White House)

WASHINGTON —In his seventh and final State of the Union address, President Barack Obama Tuesday emphasized the need to “fix our politics” and reject politicians who “target people because of race or religion.”

“We need to reject any politicians that target people because of race or religion; this isn’t a matter of political correctness, it’s a matter of understanding what makes us strong,” Obama said. “…When politicians insult Muslims … that doesn’t make us safer, that’s not telling it like it is. It’s just wrong.”

Trump has suggested banning Muslims from entering the country and called criticisms of his ideas “political correctness.”

The president also said the world looks to the U.S. to help solve problems such as terrorism, famine and ethnic conflict. “Our answer needs to be more than tough talk or calls to carpet bomb civilians,” he said. “That may work as a TV sound bite, but it doesn’t pass muster on the world stage.”

Cruz said the U.S. should carpet bomb the Islamic State force in Syria.

Obama also reassured Americans that although the U.S. is in a time of “extraordinary change,” it is not to be feared.

“Changes in our political process, in not just who gets elected but how they get elected, that will only happen when the American people demand it,” Obama said. “It will depend on you.”

In addition to improving the way politics and government work, the president stressed that the nation’s future depends on progress in three other areas: national security, education and technology development.

Despite an atmosphere of fear caused by the recent terrorist attacks around the world and at home, the president refuted public beliefs that America is “getting weaker” while enemy states are growing stronger.

“Our troops are the finest fighting force in the history of the world,” said Obama to applause. “No nation dares to attack us or our allies because they know that’s the path to ruin.”

Obama defended his strategy against the Islamic State and recalled major successes the United States has had against terrorism, such as airstrikes that have taken out enemy leadership and their vital resources as well as gradually gaining back territory in Iraq and Syria.

The president stressed that “protecting the American people and going after terrorist networks” is the government’s top priority. He called on Congress to authorize the use of military force against the Islamic State.

Obama also emphasized the importance of working with other nations to solve global issues aside from terrorism, but noted that the United States “can’t try to take over and rebuild every country that falls into crisis.”

The president also called on Congress to approve his Trans-Pacific Partnership, a trade deal with Asian nations.

Obama pointed to Cuba as an example of the importance of forging diplomatic relationships, stating improved relations between the two countries are necessary to “consolidate our leadership and credibility in the hemisphere.”

“Leadership means a wise application of military power and rallying the world behind causes that are right,” Obama said.

Obama once again vowed to close the terrorist detention facility in Guantanamo Bay, something the president has been advocating for since he first ran for president in 2008.

“It’s expensive, it’s unnecessary, and it only serves as a recruitment brochure for our enemies,” Obama said.

The speech came hours after Iran seized two small U.S. navy ships and detained their crews, but the president made no mention of the incident in his speech.

Obama also focused on education, which would lead to more people having the chance at upward mobility and “a good-paying job.”

His goals included expanding No Child Left Behind by making college accessible for all Americans regardless of economic status. Under his administration, student loan payments have been reduced, but Obama said that is not enough.

“Now, we’ve actually got to cut the cost of college,” the president said. “Providing two years of community college at no cost for every responsible student is one of the best ways to do that, and I’m going to keep fighting to get that started this year.”

The president highlighted House Speaker Paul Ryan’s interest in tackling poverty as an point of agreement between the two parties.

Obama touted a strong economy and said that anyone who says the U.S. economy is in decline is “peddling fiction.” Obama, to a standing ovation from Republicans,said outdated regulations in the private sector need to be changed and that “there’s red tape that needs to be cut.”

During his speech, Obama used the word “rigged” twice to describe economic policy he finds unfair. The word was popularized by liberal Democrats, particularly Sen. Elizabeth Warren of Massachusetts.

“The majority party here continues to defend big tobacco companies, big oil companies, Wall Street, and they act like they’ve done nothing to harm this great country,” he said after the speech. “The president made clear that Americans are not going to tolerate this.”

Current technological change also shows a changing country, Obama said, which he highlighted by recalling America’s past technological triumphs, such as the space race.

“The spirit of discovery is in our DNA,” Obama said. “We’re every immigrant and entrepreneur from Boston to Austin to Silicon Valley racing to shape a better world.”

The president spoke specifically about finding a cure for cancer, naming Vice President Joe Biden to lead the effort. The president stated he wants to “make America the country that cures cancer once and for all.”

Rep. Chaka Fattah, D-Pa., has worked on the initiative. He said his work with Sen. Tom Cole, R-Okla., shows the two parties can still work together.

“He is a Republican from Oklahoma, and I’m a Democrat from Philadelphia,” he said, “and we have worked together every single day.”

Obama also stressed that technology is essential to continuing along the path to a cleaner environment.

“Hope started with the Founding Fathers,” he said. “The country’s built on a notion that many people can work together for a greater good.”

“We’re feeling a crushing national debt, a health care plan that has made insurance less affordable and doctors less available, and chaotic unrest in many of our cities,” she said. “Even worse, we are facing the most dangerous terrorist threat our nation has seen since September 11th, and this president appears either unwilling or unable to deal with it.”

Other Republicans found the speech too vague.

“Anytime he edged into specifics,” Sen. Shelley Moore Capito, R-W.Va., said, “he edged back out.”

Charlie Dent, a Republican congressman from Pennsylvania, said he appreciated Obama’s suggestions for less regulation and bipartisanship, but he hasn’t seen the president follow through on that rhetoric. tone.

“He got very confrontational in his tone,” Dent said. “He talked a lot about collaboration, which is great, but I haven’t seen much of that. It’s too little, too late.”

Republican presidential candidates were similarly critical. Sen. Ted Cruz, R-Texas — who did not attend Obama’s speech — said in a news release that the president is “in denial of reality.” Donald Trump tweeted that he found the president’s speech “really boring, slow, lethargic” and “hard to watch.”

Sen. John Cornyn, R-Texas, was more pithy in his response to Obama’s speech.