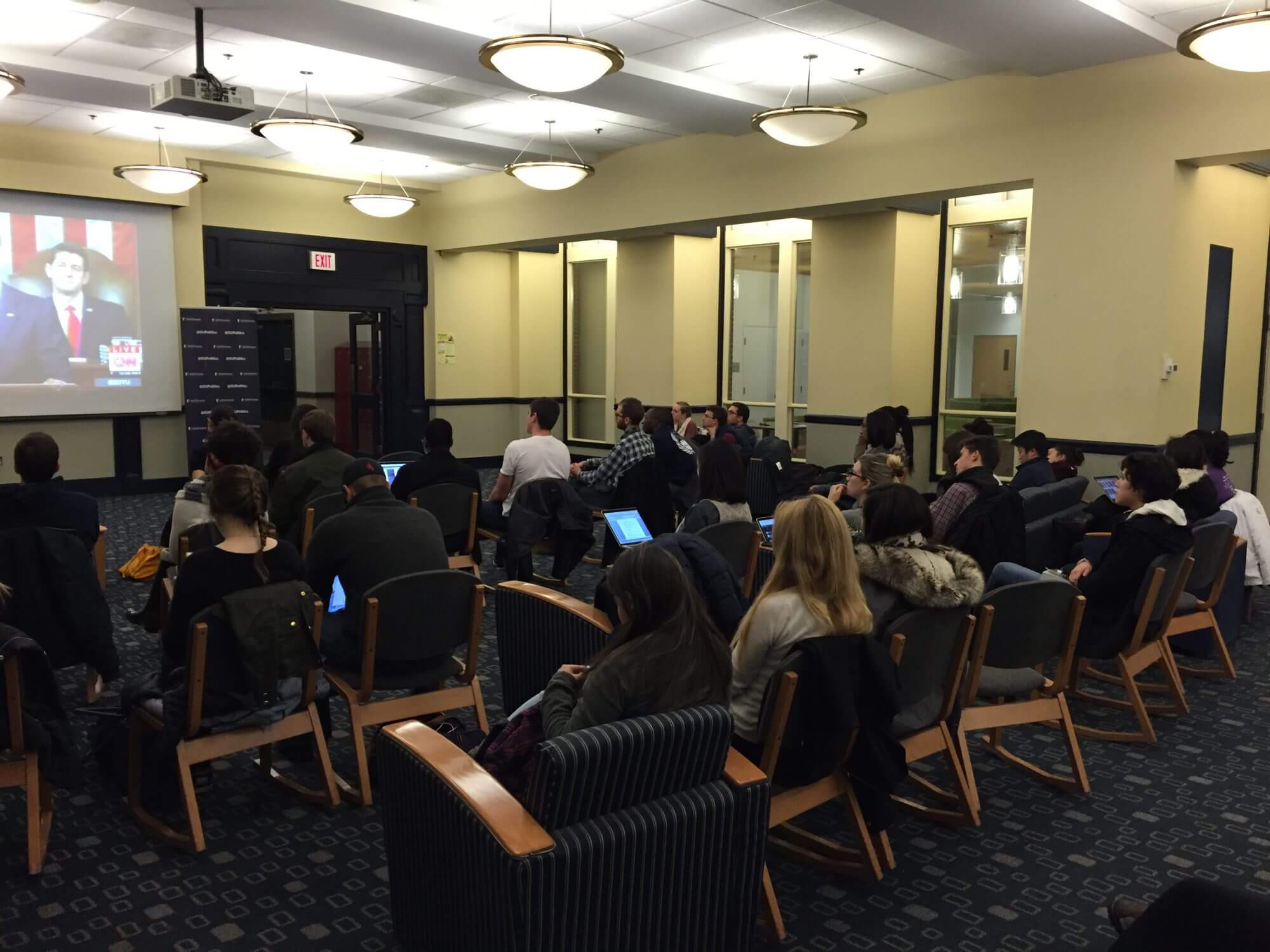 Students at Georgetown University watch the 2016 State of the Union. (MNS)

WASHINGTON — Students at Georgetown University sat in silence during most of President Obama’s final State of the Union address Tuesday night.

Despite repeated standing ovations in the House chamber, students viewing the speech at a watch party sponsored by the university’s Institute of Politics and Public Service, kept quiet throughout most of the speech. Even Obama’s call for affordable college – usually a hot-button issue with students – drew no reaction from the group of about 50 undergraduates and graduate students.

Students attributed the muted mood of the event to a variety of reasons. Parag Shende, a first-year graduate student studying public policy, said that the speech would have drawn a much stronger reaction if it had been given in 2008.

“After so many years, we’ve gotten used to his style,” Shende said.

Jordan Oshinsky, a freshman business major, attributed the mood to “quiet, respectful listening.” He said that the State of the Union is not the kind of speech that draws strong reactions, and that students were not bored by the president’s remarks.

“I would assume if they were bored they would leave,” Oshinsky said.

And some students said the lack of a strong reaction had more to do with the crowd, than with the content of the speech.

“I think everyone was on their phones,” said Jack Welty, a senior studying international economics.

Before the speech began, students said they hoped for an uplifting message from the president that went beyond partisan politics and the  issues of the day. They did not expect any specific policies to be detailed, but they did hope for a look at Obama’s ideas for the future.

“I’m hoping Obama gets back to his inspirational rhetoric,” to counter Republican “doom and gloom,” said Max Magid, a 19-year-old freshman from Indianapolis.

“I’m hoping he’ll address the xenophobia that’s coming out of the Republican party,” Shende said. “I’m really worried what leaving those comments unaddressed will bring about.”

And while students were satisfied with Obama’s message, the speech offered few surprises. Most were supportive of the vision Obama laid out for the country.

“It was pretty much what I expected,” Oshinsky said. “[Obama] always sounds very polished and well-intentioned.”

Magid said he was impressed by the boldness of the speech.

Afterward, some students looked forward to the Republican response to the address, both in Governor Nikki Haley’s speech and in Thursday’s presidential debate.