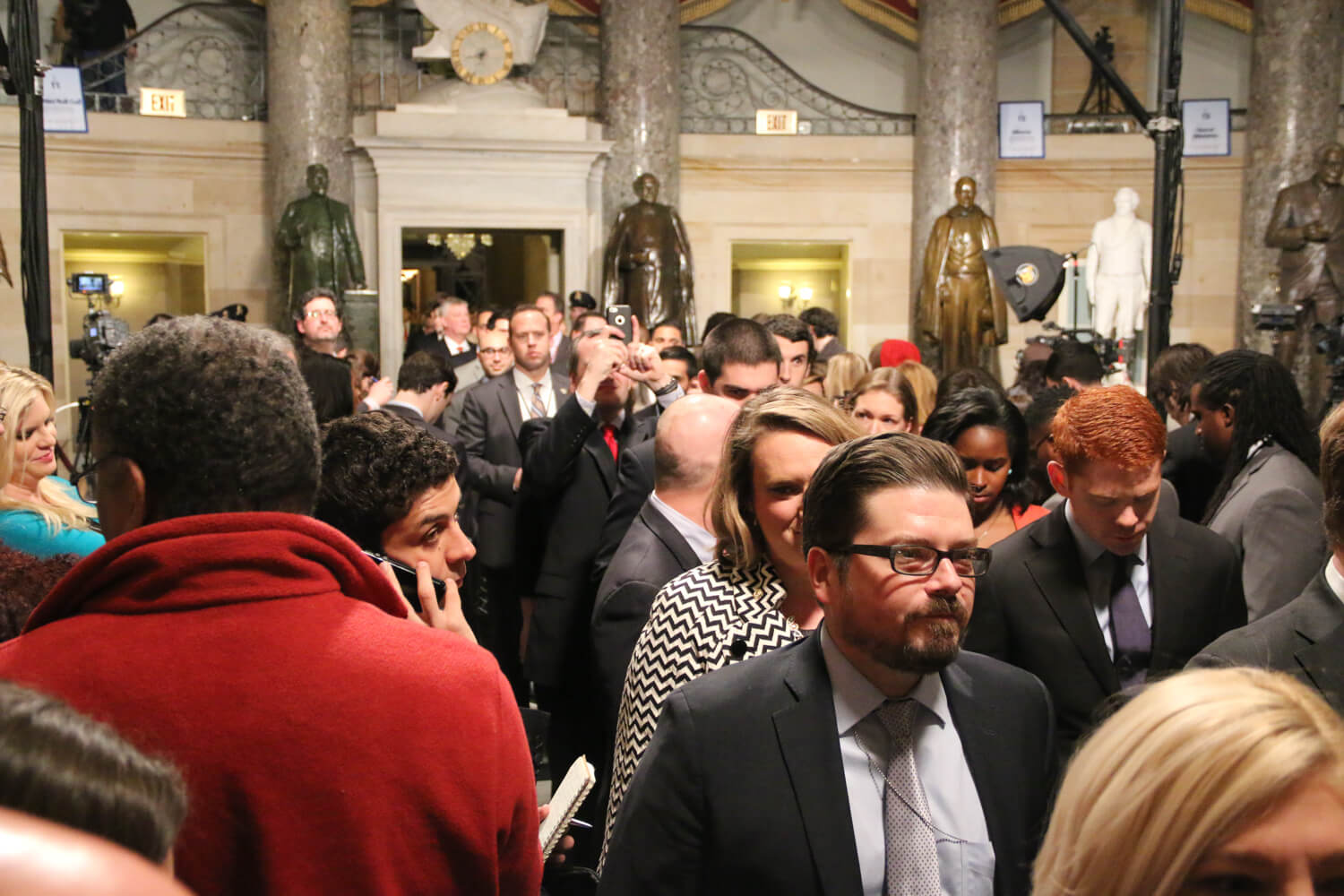 Lawmakers walk through the Capitol before President Obama's State of the Union.

WASHINGTON — In his last State of the Union address, President Barack Obama understood he would soon no longer be the most important person in the room. Although the event carried its expected glitz and glamour, the president knew eyes would turn shortly to a future that he wouldn’t be a part of.

“Tonight marks the eighth year I’ve come here to report on the State of the Union,” Obama said. “And for this final one, I’m going to try to make it shorter. I know some of you are antsy to get back to Iowa.”

He was likely referring to Sens. Marco Rubio of Florida and Bernie Sanders of Vermont, prominent candidates in the 2016 presidential race, sitting in the House chamber taking in the speech.

Noticeably absent from the chamber was Sen. Ted Cruz of Texas, another Republican frontrunner. Cruz was giving a speech in New Hampshire he described as a preview of what his first State of Union would sound like. Obama implicitly referenced the Texas senator during his address, saying, “Our answer needs to be more than tough talk or calls to carpet bomb civilians.”

Like Speaker Paul Ryan, Rubio came prepared with his best poker face. The senator broke from his statue-esque pose to applaud only one line from Obama: “Our Constitution begins with those three simple words, words we’ve come to recognize mean all the people, not just some; words that insist we rise and fall together.” The words: “We the people…”

Seconds earlier, however, nearly every Republican, Rubio included, failed to react to one of Obama’s most direct lines.

“When politicians insult Muslims, when a mosque is vandalized, or a kid bullied, that doesn’t make us safer,” the president said. “That’s not telling it like it is. It’s just wrong. It diminishes us in the eyes of the world. It makes it harder to achieve our goals. And it betrays who we are as a country.”

Glimpses of bipartisanship were evident, although not entirely easy to find.

“I actually got up and applauded,” said Rep. Tom Cole, R-Okla., referring to his reaction to Obama’s comment about Muslims. “This is a country of great diversity, and I thought the president was right to speak out about that, and that’s something Americans of all [parties] and all political persuasions ought to guard against.”

But for the most part Obama’s message of optimism, hope and cooperation was met with little enthusiasm, as opposing beliefs were on sharp display in the chamber. Two guests were particularly emblematic of this split: In the first lady’s box, Ohioan Jim Obergefell, plaintiff in the same-sex marriage Supreme Court case, was on his feet regularly. Directly across the chamber, Kim Davis, the Kentucky county clerk who refused to issue marriage licenses to same-sex couples even after the decision, worked hard on her marble statue impression.

“I certainly agree that the partisanship in this country, the bitterness and nastiness in our politics has to change if we are going to work effectively for the American people,” said Rep. Carlos Curbelo, R-Fla.

Davis, invited by Freedom Caucus Chairman Jim Jordan, R-Ohio, might have been the least expressive, but she wasn’t the only notable guest in the chamber. Other attendees ranged from national celebrities, like University of Michigan football coach Jim Harbaugh (a fitting persona for Obama, a noted sports enthusiast), to ordinary people who have done extraordinary things, such as two of the youngest visitors to the Capitol on Tuesday.

Michelle Obama invited 12-year-old Braeden Mannering after she met him at the White House Kids’ “State Dinner” in July. Four-year-old Logan Barritt, invited by Speaker Ryan, used his own money to send care packages to service members overseas during the holidays.

Michelle Obama kept one seat empty in her box to represent victims of gun violence.

Edith Childs, invited by the White House for her support of Obama in 2007, sported a glittering gold sequined pantsuit and matching hat. Her influence was evident, as the Democratic side of House floor began chanting her signature line (“Fired up! Ready to go!”) when the president entered the chamber.

One Obama administration official was purposefully absent: Jeh Johnson, secretary of homeland security, was this year’s “designated survivor,” the one member of the cabinet who is not in the chamber in case of an attack on the Capitol building.

For his message on national security, the president likened the “rhetoric you hear about our enemies getting stronger and America getting weaker” to the talk of America’s economic decline, both of which he called “political hot air.” This drew a strong murmur from Republicans, one of their loudest grumbles.

“The United States of America is the most powerful nation on Earth,” Obama said, drawing a mixed reaction from the House floor. “It’s not even close.”

But not all lawmakers saw eye to eye with the president’s message of confidence.

“In foreign policy, that’s where I have major differences with the president,” Curbelo said. “He described a world that is very different than the one I am observing. The American people are worried; there are many threats out there to our national security. The president, I think, continues to be naive on foreign policy.”