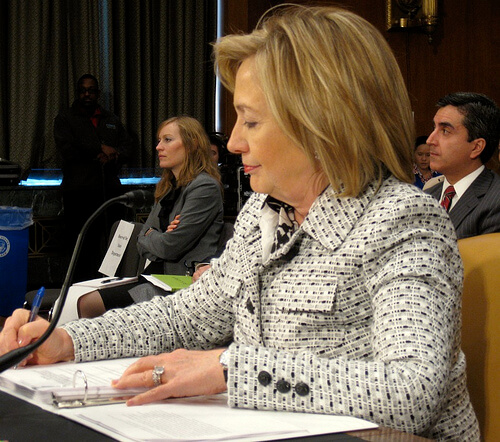 There remains a troubling gender gap when it comes to technology and the Internet in the developing world, the Clinton Foundation revealed in a report released Monday that has been largely overshadowed by the controversy over Hillary Clinton’s email.

The report, which highlights the slow global progress for women empowerment, aggregates data on usage and access along gender lines from a wide variety of sources.

The estimated number of people using the Internet doubled in 10 years to 2.7 billion users in 2013, according to the International Telecommunication Union (ITU), a United Nations agency dedicated to information and communication technology.

“In the U.N. system, certainly, this issue is high on top of the ITU’s agenda,” said Doreen Bogdan, chief of strategic planning and membership at ITU who will be speaking at the U.N. Commission on the Status of Women this month.

Exactly 20 years since the U.N.’s Fourth World Conference on Women in Beijing—where Hillary Clinton said the now-famous line, “Women’s rights are human rights”—the report serves as a measure of progress and a call to action to address the gender inequities that women face today.

At the Beijing conference, the U.N. set up certain goals that targeted issues such as equality in the workplace, technical fields, decision-making positions and affordable access.

“We are very far away from achieving any of those targets and that’s why this issue is so important now,” Bogdan said. “We really need to galvanize recommitment and make sure we can come through on these targets.”

In 2013, Intel Corporation in conjunction with Dalberg Global Development Advisors and GlobeScan conducted a study to better understand the Internet gender gap. They found significant economic benefits for women once they obtained a mobile phone or an Internet connection.

“Women who do have access to the Internet in developing economies are able to be more empowered economically,” said Chris Coulter, co-CEO of GlobeScan. “The potential for income is higher because they are using it for job searching and entrepreneurship.”

Intel’s 2013 study reported that women earn 30 percent more income after gaining access to the Internet. Besides an increase in the percent of women searching for jobs, 80 percent of women in developing countries improved their education and benefited psychologically.

“Women who have access to the Internet feel more empowered,” Coulter said. “They feel that the Internet is a source of liberation and freedom in many ways.”

“Access to technology provides a uniform platform for information and education that is self-directed,” Martin said.

Technology allows women to work remotely and build relationships and opportunities for advancement through email.

“With technology, women are afforded an incredible amount of flexibility, which is essential for women who are trying to balance work and family,” Martin said.

In some countries in sub-Saharan Africa, such as Uganda—where women farmers text to stay updated on current market prices and farming techniques—the access-to-Internet divide can be as high as 45 percent.

The cost of a mobile phone, a broadband subscription or Internet access is simply not affordable for some women in developing countries. The report specifically mentions Bolivia, Egypt, India, Kenya, Mexico and Uganda.

In Egypt alone, one in five women felt that the Internet wasn’t a place for them and that it was inappropriate to be online, Coulter said.

“It seems like we’re at the cusp now trying to address the gender gap and engaging girls across the world,” Coulter said.

Last year, ITU and U.N. Women together launched the GEM-TECH Awards to recognize individuals, projects and organizations that harnessed the power of information and communication technologies, or ICT, to advance gender empowerment.

One of the winners of the awards—Telecentre.org Foundation—partnered with ITU to train women in digital literacy.

“By teaching women ICT skills and teaching them to become digitally literate, we’ve seen examples where a domestic worker, working outside of her country, has been able to go back home, create a business and employ lots of people,” Bogdan said. “The number of success stories is large.”

On the fourth Thursday of every April, the U.N. also hosts an event called “ Girls in ICT Day,” calling upon all countries to encourage girls to consider a future in the technology sector. Along with this international movement, the ITU has also set a goal to have equality in access to broadband technologies by 2020.

Bogdan, however, said the government would not be able to achieve its goals alone. GlobeScan’s Coulter agreed and identified the federal government as a force to “empower and catalyze the private sector involvement” as well.

“There’s openness in the tech industry to be part of the conversation that would address an issue like this,” Coulter said. “It’s in their long-term interests to have much more diversified and inclusive online global community than one that is skewed more towards men and boys.”

Corporations like Intel are playing a critical role in empowering women across the globe. Intel produced a documentary film called “ Girl Rising” in 2014 to spark a conversation about female education.

Coulter said the solution to the Internet gender gap would also have to be multi-faceted and that Intel took a good first step in acknowledging the issue at hand by publishing its “Women and the Web” report.

Another key company, Cisco Systems, Inc. partnered with the Jordanian government in 2013 to advocate for nationwide broadband, which Cisco said would increase connectivity and online accessibility in a way that supports small business entrepreneurs, educational elements and healthcare.

“There’s lots of work to be done but in the next couple of years, with the additional insight we have from the ‘No Ceilings Report,’ we’re in a good place to drive progress forward,” Coulter said.