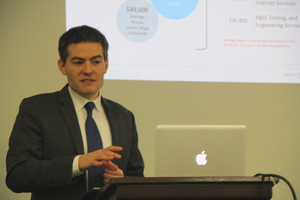 Tim Herbert, vice president of research at CompTIA, discusses the findings of the Cyberstates 2015 report at a press briefing Tuesday. (Medha Imam/MNS).

Tim Herbert, vice president of research for CompTIA, discusses the findings of the Cyberstates 2015 report at a press briefing Tuesday. (Medha Imam/MNS)

WASHINGTON – The nation’s tech workforce has expanded to a total of 6.5 million with the addition of 129,600 net new jobs in 2014, according to a report released Tuesday morning.

The Computer Technology Industry Association—CompTIA—presented its annual Cyberstates report, showing growth in 38 states in the previous year. Among the fastest growing states in tech employment were California, Texas and Florida.

“Everyone is using technology so intensely now that they are all demanding and relying on technology employees,” said Tim Herbert, vice president of research at CompTIA.

Although the overall tech industry grew, tech manufacturing experienced a 1.2 percent decline with a loss of 13,300 jobs from 2013.

“There’s always going to be very high-level, high-skilled manufacturing and that’s going to stay strong in terms of the design aspect of it,” said Liz Hyman, executive vice president of public advocacy for CompTIA. “But the software and services side is where we’re seeing a lot of growth.”

Even with that decrease, wages in tech manufacturing and the overall tech sector remain relatively high, Herbert said.

The average annual wage in the tech industry was $100,355, almost double the average wage for the private sector. The rate of tech unemployment is at 2.4 percent, less than half the national rate, the report said.

“Most categories of technology have outperformed the national economy,” Herbert said.

As part of its research, CompTIA conducted a tech business confidence survey and found that nearly two-thirds of businesses were concerned about a “challenging hiring environment in 2015.”

“In most states, there are more tech occupations than there are tech industry employees,” Herbert said.

To address the skills gap, the association advocates investment in STEM, or science, technology, education and math, and supports the passage of the Startup Act.

“STEM education initiatives are crucial to figure out what that long-term ability to fill the pipeline is about,” Hyman said. “We’re also looking in the short-term to look at high-skilled immigration as a way of getting short-term, high-skilled people in place to continue to spur innovation and job advancement.”

Tech America, the public policy wing of CompTIA, will advocate for the Permanent Internet Tax Freedom Act this week on Capitol Hill. Sens. John Thune, R-S.D., and Ron Wyden, D-Ore., are expected to reintroduce the bill this week.