From Everett to Ernst, what the minority response means today 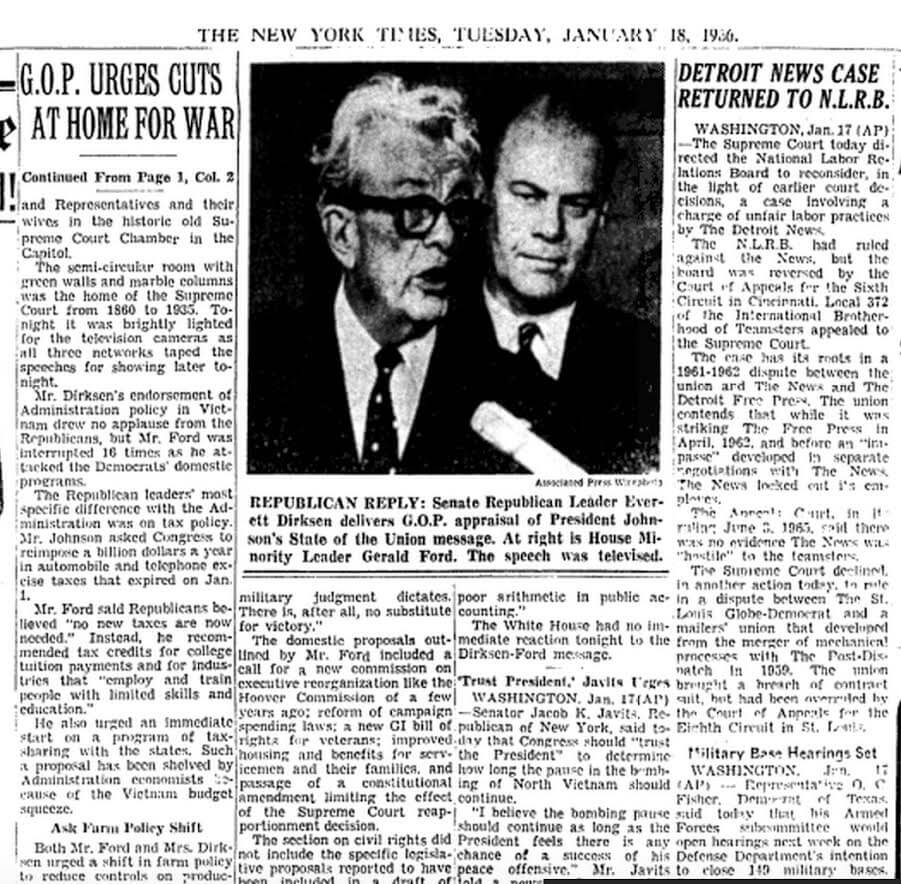 New York Times article about the first minority response to the State of the Union.

New York Times article about the first minority response to the State of the Union.

WASHINGTON – When Iowa Sen. Joni Ernst delivers the opposition party response to the president’s State of the Union address Tuesday night, the first-term Republican will be continuing a political tradition that began 49 years ago.

Beginning with Senate Minority Leader Everett Dirksen, R-Ill., and House Minority Leader Gerald Ford, R-Mich., the rival party has used the airwaves to make sure the president’s annual address to a joint session does not go uncontested.

Using different formats, such as delivering the speech in front of a live audience, pre-recording interviews with constituents and hosting panel discussions, the leading members of the minority party join to push their agenda.

“It was a means to interrupt a little bit of what was an open mic for the president,” said John Hudak a fellow in governance studies with the Brookings Institution. “This gave the Republicans the opportunity to have a voice.”

Yet, importance is now also placed on the partisan chosen to do the job as well as what that person says.

Since 2005 when Sen. Harry Reid and Rep. Nancy Pelosi gave the Democratic response to President George W. Bush, the task has been spread around to less senior members, and even non-members of Congress. In fact, it is now seen almost exclusively as, “an opportunity to shine the light on a rising star,” Hudak said in a phone interview.

Ernst, as a freshman senator who successfully flipped a swing state that voted for Obama in 2008 and 2014, qualifies, according to Geoffrey Skelley, a political analyst at the University of Virginia Center for Politics.

“She really burst onto the scene with something amusing, something ridiculous really,” added Hudak in reference to her campaign ad titled “Squeal.”

Ersnt is also a symbol of diversity within the party, according to Skelley.

“She is sort of a counter to the war on women story line the Democrats have painted the Republican Party with,” he said in a telephone interview.

Democrats used a similar approach by placing Virginia Gov. Tim Kaine, and then-Sen. Jim Webb, D-Va., in front of the camera in succeeding years, 2006 and 2007. The idea, Hudak said, was to highlight moderate Democrats with a presence in a swing state.

Yet with fewer and fewer people watching the State of the Union, according to Nielsen, a response to the speech seems less important, at least to the television audience.

“A lot of this is a dog and pony show, and as you move form the actual State of the Union to the periphery…it has a smaller and smaller chance of actually having some impact,” says Hudak.