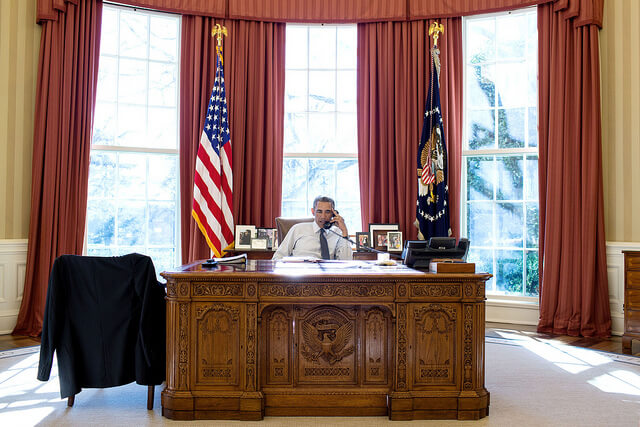 President Obama speaking on the phone with a foreign official in the oval office. (Official White House Photo by Pete Souza)

President Barack Obama speaking on the phone with a foreign official in the oval office on Jan. 5. (Official White House Photo by Pete Souza)

“I think it is a very positive thing to raise the tax rate to 28 percent,” said Dean Baker, co-director at The Center for Economic and Policy Research. “This will decrease the disparity between tax income and labor income.”

Economic and policy experts said before the State of the Union address that the president’s plan could also increase funding for middle-class education and child care programs.

Despite Republican opposition, Obama will announce new tax proposals that would raise taxes and fees on the top two-percent in the speech this evening, the White House has already announced. The plan would increase the top capital-gains tax on long-term capital gains from 23.8 percent to 28 percent.

The administration has also proposed a tax on assets at death to finance a few proposals to cut taxes and raise benefits for the middle class, officials said.

Baker, who has done intensive research on interest rates and tax policy, said Obama’s plan hearkens to President Ronald Reagan’s Tax Reform Act in 1986 that simplified the income tax code, broadened the tax base and eliminated many tax levels to combat income inequality.

A national report released by the Stanford Center on Poverty and Inequality said income inequality has been rising since the Great Recession recovery period in mid-2009. In 2012, the proportion of income held by the top one percent had rebounded, nearly retuning to the high levels from before the recession, the report said..

“The big difference in tax rate gives high-end people [the opportunity] to play games and have the ability to hide their capital gains,” Baker said. “I think raising that tax on their investment is certainly a good idea.”

“The president proposed spending programs such as education benefits and expanding community colleges have to be funded somewhere,” said Witte, whose research focuses on public finance and taxation. “The wealthiest seem like a reasonable target.”

The proposed plan would raise $320 billion over the next decade, covering the $175 billion in new provisions tax cuts. The revenue generated would cover the increased child care and education credits, a $500 credit for families in which both spouses work as well as two years of tuition-free community college for some students.

The core of the proposed tax increase, described by the White House as a measure to fix the “trust-fund loophole”, would ban the wealthier from passing on income-tax free assets to their heirs at death.

“Currently we not only don’t tax capital gains on deaths but we forget capital-gains on deaths all together,” said William Gale, co-director at Urban-Brookings Tax Policy Center. “It has created a lot of shelter gains that people pursue. There’s no reason why it has to be that way.”

Observers are split on whether the plan will have an effect on investment behavior.

“I don’t think it will have any impact at all on the investment behavior,” said Philip Harvey, professor of law and economics at Rutgers School of Law-Camden. “I simply disagree with the argument that the high-wealth and the high-income will invest less into the economy. This shift in the tax burden at this moment will bring beneficial effect to the economy”

Republicans like Florida Sen. Marco Rubio, however, argue Obama’s plan is “counterproductive” and would introduce instability to the economy because it will stifle investment.

Sebastien Gay, a lecturer in the Department of Economics at the University of Chicago, said the plan would encourage the rich to redistribute their investments and many may continue to find new loopholes.

“My only fear about the plan is that it will encourage more wealthy Americans to hire tax attorneys to find ways to decrease their tax level,” Gay said. “Within the legal requirements, a lot of people might still be able to find ways to go around the system.”

In 2012, Obama identified people earning less than $250,000 a year as the “middle class” in his proposal to extend the Bush-era tax cuts for this income level. Harvey said the targeted beneficiaries include too many demographics to pinpoint who are the people receiving the incentives.

“The group that is in the most need of a boost are the ones whose wages have gone stagnant over the several decades—the ones who were historically called ‘the working class’ or the ‘blue and pink collar class’ rather than the managerial class,” Harvey said.

Ryan Ellis, tax policy director at Americans for Tax Reform, said the plan would not directly impact the rich or the middle-class.

“It’s a little micro-targeted,” Ellis said. “If you are a married couple with a stay-at-home mom, then the $500 credit on second wage earner in the household doesn’t help you at all; if you are a single-mother, the child care incentives don’t apply to you either.”

Although it is unlikely the Republican-controlled Congress will pass the plan intact, the president may simply be trying to solidify his legacy.

“I think getting into the next presidential cycle, he would like to amend his record and show that ‘It is not about what I did but also about what I wanted to do”,” Witte said.