New immigration waiver: ‘step in the right direction but not enough’ 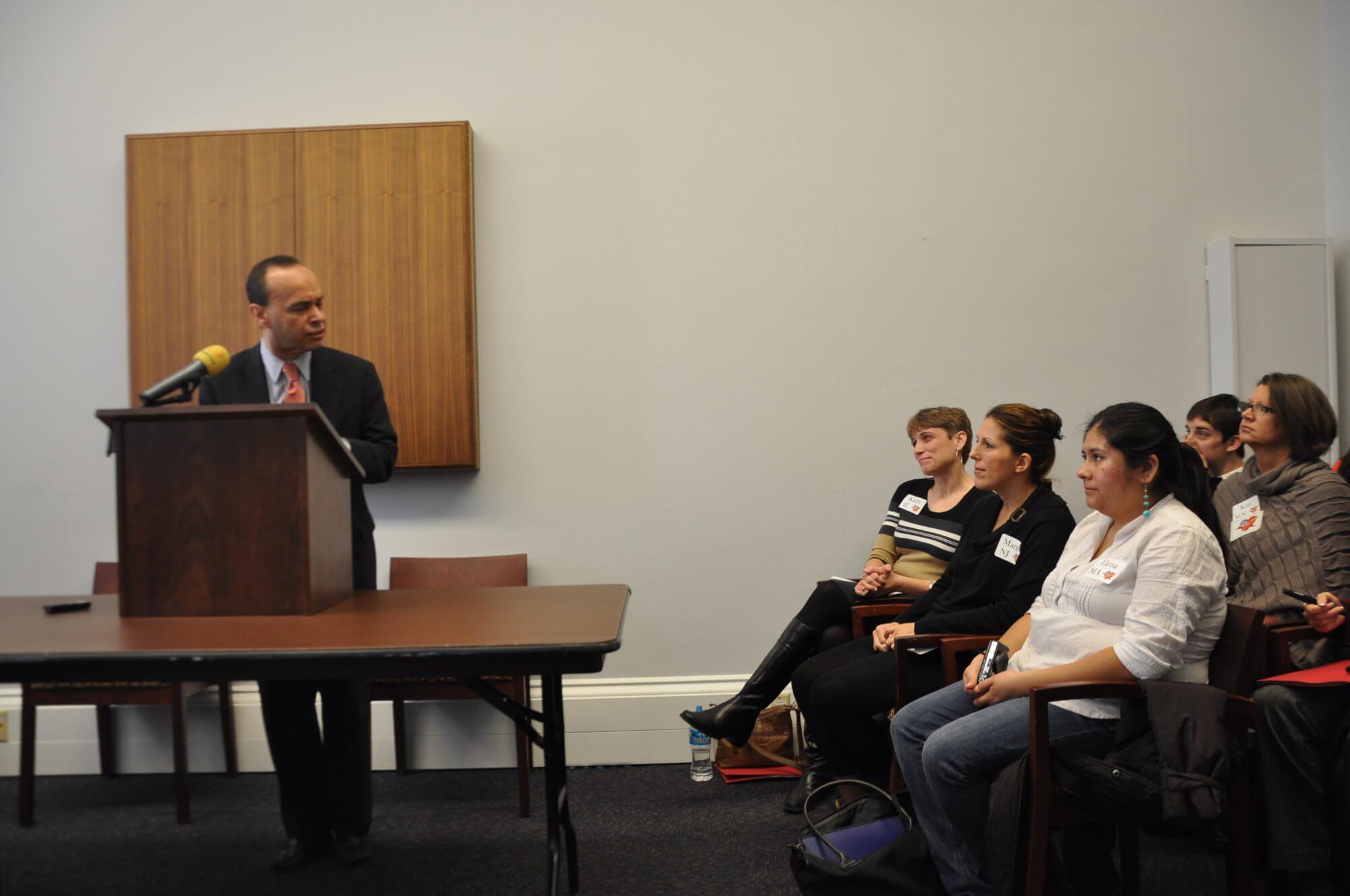 Rep. Luis Guitierrez, D-Ill., speaks to a group of American Families United Members. These women are spouses of undocumented immigrants whose families have been separated. (Ashley Balcerzak/Medill)

WASHINGTON—“Mixed status” families and their advocates consider a new federal immigration policy aimed to keep families together “a step in the right direction—but not good enough.”

Under the rule effective Monday, certain undocumented immigrants who are immediate relatives of American citizens can apply in the United States for a waiver to overcome penalties they accrued for unlawful presence in the country.

In the meantime, immigration activists have to settle for small slices. Before the existence of Obama’s new “provisional unlawful presence waiver,” or the I-601a waiver, the immediate relative of an American citizen would have had to go back her home country to obtain a green card. That is the status spouses, children or parents are entitled to under the 1952 Immigration and Nationality Act. But until Monday, there was a catch. A 1996 amendment to the immigration law states that if an individual has been in the U.S. illegally for over a year, a 10-year bar on reentry is triggered when that individual leaves the country.

Am I eligible for the I-601a waiver? (Ashley Balcerzak/Medill)

“These bars trap people inside the country who are entitled to green cards under law,” said Ben Winograd, a staff attorney with the American Immigration Council. “It creates a catch-22 for those seeking lawful immigration.”

To overcome a country ban, a family member can file a narrow family unity waiver if he can sufficiently prove that an immediate relative’s banishment will result in extreme hardship. Extreme hardship may include health, educational or financial problems, but must go beyond the basic separation from one’s family.

“Separation from my husband would tear my family apart,” said Jaime Weisberg, who plans to file the new waiver for her husband in the next few weeks. “It’s hard to meet this [hardship] standard, and as a U.S. citizen I shouldn’t have to do this.”

Weisberg met her husband of seven years, Gabriel, while she was working as a community organizer in Colorado. Although she knew he was from Mexico and undocumented, they fell in love, so the couple got married and had a daughter.

“I shouldn’t have to choose between my husband and my country,” Weisberg said. “I feel lucky that I now get to make my case with this waiver.”

If the extreme hardship waiver is approved by the U.S. Citizenship and Immigration Services, Gabriel can apply to the State Department for a visa. He will still need to return to Mexico in order to finish the process at a U.S. consular office, but the time separated from his family is expected to last weeks instead of years.

“This is a step forward, but not enough,” Weisberg said.

In a memo released in January, USCIS Director Alejandro Mayorkas said, “The [waiver] change will have a significant impact on American families by greatly reducing the time family members are separated from those they rely upon.”

Many immigration lobbyists disagree with the significance of the measure.

“This is the narrowest possible thing they could have done,” said Bruce Morrison, founder of lobbying firm Morrison Public Affairs Group and former Connecticut congressman. “It’s not a whole loaf, or even half of loaf. It’s a slice. But better a slice than nothing.”

Morrison, an immigration lawyer, proposed Congress pre-adjudicate—or pre-approve—all waivers, not simply the I-601 Waiver of Grounds of Inadmissibility.

“There’s nothing special about this waiver,” Morrison said. “They solve one problem when there are ten.”

Another available alternative, Morrison said, is “parole in place”—granting these undocumented immediate relatives permission to apply for a green card in the United States and forgoing the entire waiver process, a procedure granted in certain cases to military families.

“I understand the rationale of waivers, but the implementation is wrong,” said Jessica Vaughan, the director of policy studies for the research institute Center of Immigration Studies. “Waivers are issued before it’s determined if they will be given green cards; It’s like giving out a driver’s license before they take the test. We are being too lenient and setting up incentives for fraud.”

“This waiver is a step in the right direction, but it certainly could be expanded,” said Randall Emery, president of American Families United, an immigration lobbying group.

American Families United lobbies for due process for U.S. citizens: allowing families that include undocumented immigrants to make their individual case before an immigration judge. Morrison helped draft a waiver proposal for the lobbying group that would “change the law so that citizen spouses are not separated from their families.”

In the larger fight for family-based immigration reform, Congress will explore changes that to reduce system backlogs, as immigration courts are currently dealing with cases filed as far back as 1989, according to the State Department. As of November, the family-based visa waiting list contained 4.3 million individuals, with the majority  from China, India, Mexico and the Philippines.

Vaughan recommends changing the Immigration and Nationality Act category system by eliminating the sibling category and redistributing family numbers to accommodate more of the higher preference groups, such as unmarried adult children.

“It’s a cruel joke to even accept their applications when they have to wait decades to come,” Vaughan said. “The system is currently making promises of green cards that we can’t keep.”

President Obama and a bipartisan group of eight senators have released separate plans that both incorporate the goal of family unity into immigration reform.

“We should consider everything about immigration reform from the premise, ‘Does it help strengthen and fortify families?’” Rep. Luis Gutiérrez, D-Ill., said in a February address to American Families United. “And if it does, we should fight for it.”