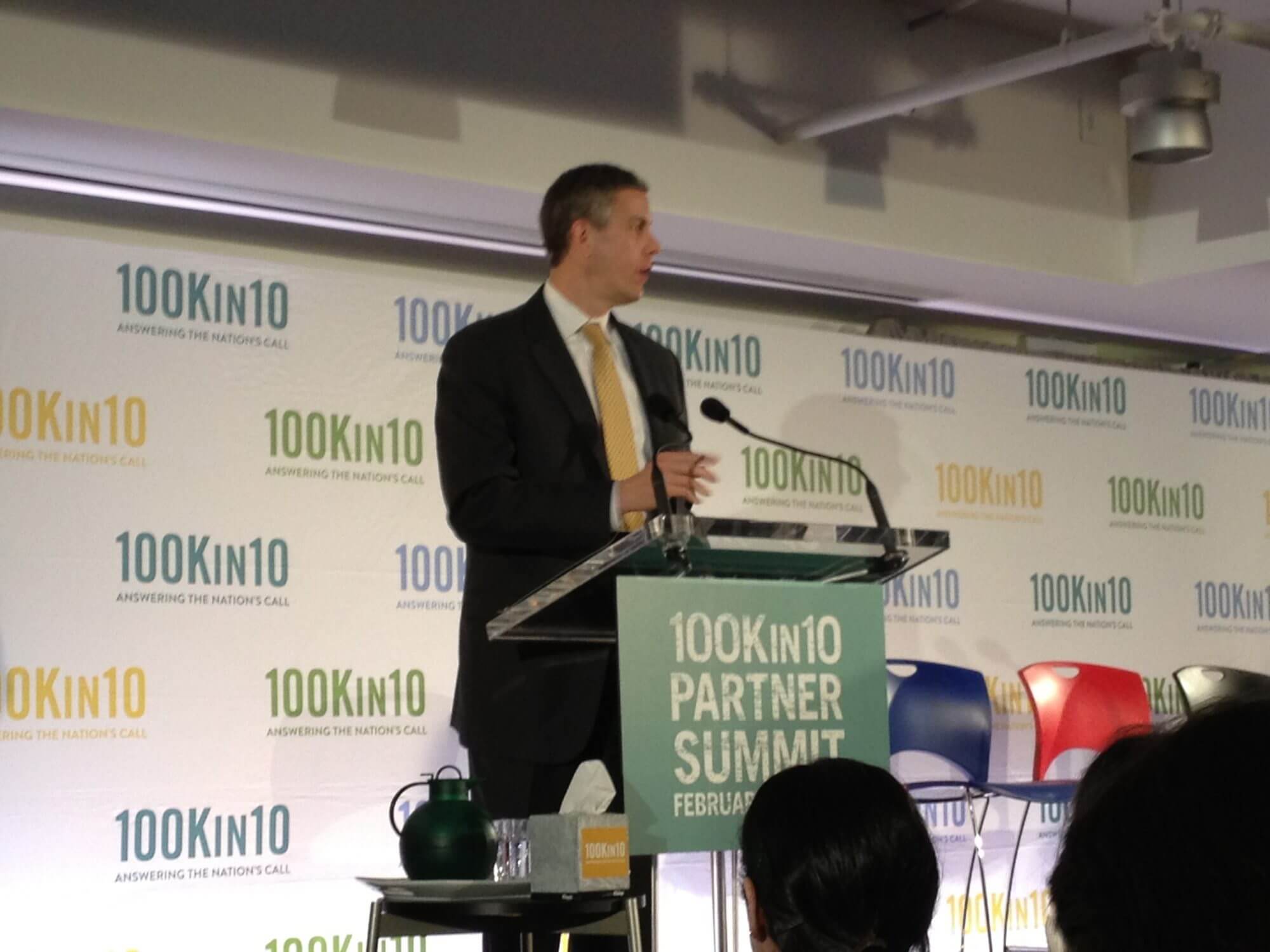 Arne Duncan gives his remarks on STEM education at the 100Kin10 summit in Washington. (James Arkin/Medill)

Arne Duncan gives his remarks on STEM education at the 100Kin10 summit in Washington. (James Arkin/Medill)

WASHINGTON – High unemployment doesn’t necessarily mean jobs aren’t available; instead, those seeking work may not have learned the skills employers demand. Secretary of Education Arne Duncan said part of the problem is a shortage of teachers with sufficient training in science and technology.

“I can’t tell you how many CEO’s at present I meet with who are trying to hire right now in a tough economy, thousands and thousands of good paying jobs … that they can’t fill because we’re not producing the workers with the skills they need to employ them,” Duncan said. “And so many of those skills lie in the STEM areas.”

100Kin10 is an initiative designed to fix this disconnect by getting 100,000 new teachers up to speed in the fields of science, technology, engineering and math — STEM education — over the next decade. The Carnegie Corp. of New York, Opportunity Equation and NewSchools Venture Fund formed 100Kin10 in 2011 and held a summit Tuesday at Google’s DC offices to launch the movement.

According to Duncan, the demand for more STEM teachers has been apparent for decades, but the problem has simply been “admired” rather than solved.

“This is actually an experiment in a very different way of making big social change happen so we can see real results for real kids and teachers,” said Talia Milgrom-Elcott of the Carnegie Corporation.

The initiative is starting out with  $24 million backed by 15 donors, including Google. Overall, it has more than 115 partners from state and local governments, universities, corporations and the Department of Education.

According to Anthony Carnevale, director of the Georgetown Center on Education and the Workforce, not only are people trying to hire workers with skills in STEM areas, but these jobs will likely continue to grow.

“STEM jobs are growing. They’re going to grow from about 6 million to 9 million jobs over the next decade we think, as the recovery comes on,” Carnevale said. “The wages will grow commensurately … The real shortage is of STEM competency all across the economy.”

To combat this shortage, 100Kin10 partners have made a wide range of commitments to the initiative including multiple universities pledging to train between 150 and 1,500 new STEM teachers by 2016. Teach For America pledged to recruit 11,000 new teachers in STEM subject areas.

Additionally, the federal government will play a role in improving STEM education. Leland Melvin, the associate administrator for education at NASA, said he recently joined around 40 teachers who won an opportunity experience near weightlessness by flying on a “zero G airplane.”

It’s rewarding “to see the inspiration, the enthusiasm from these teachers and what they’re going to take back to their classroom from this hands on learning activity,” Melvin said. “NASA is so committed to 100Kin10 because we want to provide these unique opportunities that show the relevance and the power of what STEM can do.”

One of the main issues of STEM teaching, according to Melvin, is that many teachers are not knowledgeable enough in their subject areas to teach at a high level, especially in middle schools. Melvin said there are ways federal agencies can combat this issue.

“We have this wealth of these subject matter experts that could Skype in for a teacher, become a mentor for a teacher and actually help them through some difficult concepts before they even start to teach,” Melvin said.

The 2013 federal budget set aside $620 million dollars in state grants that would go to reducing the shortage of STEM teachers. Despite this, Duncan said the best way to advance math and science education lies in local efforts.

“Whatever we can do to help, to support, to cheerlead, we will do that,” Duncan said. “But what is happening at the grassroots across this country for young people I think is extraordinary.”