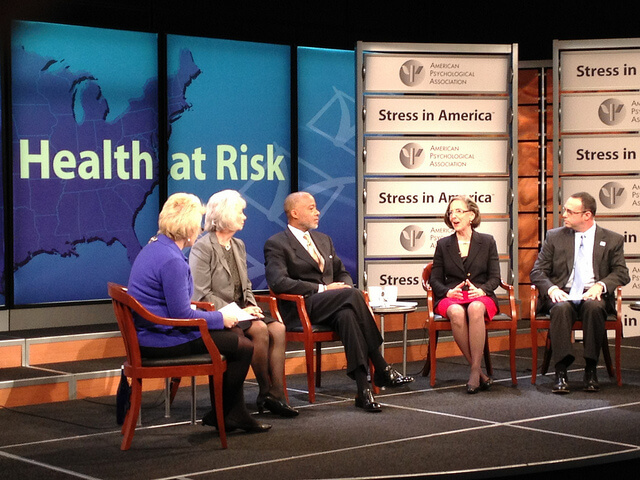 D.C. residents feel higher levels of stress than the national average, the APA reports. This may be due to a higher cost of living, as 68 percent of D.C. residents surveyed listed money as a source of stress. (James Arkin/Medill News Service)

WASHINGTON – Overwhelming stress and satisfaction with  life seem to be emotional contradictions – unless you live in Washington.

In a study released Wednesday by the American Psychological Association, higher percentages of D.C. residents reported feeling overwhelmed by stress than the national average. In the same report, however, a higher percentage of Washingtonians reported being satisfied with their life than the national average. The APA surveyed 1,226 Americans and another 262 Washingtonians.

Dr. Robin Haight, a clinical psychologist practicing in Tyson’s Corner, Va. – just outside the D.C. area – agreed that challenges in Washington attract a certain type of person. These challenges, however, may eventually lead to stress.

“It’s a very high-achieving area. And so there’s inherently pressure to keep that achievement level very high for people,” Haight said. “People here in the Washington metro area I see often compare themselves to other people who are, they believe, more successful than them, and so they feel badly about their own achievements at that point.”

Though financial concerns actually cause stress in slightly lower percentages in D.C. than nationwide, 68 percent of residents still said money was a source of stress. According to APA President Suzanne Johnson, financial stress is often higher in large cities.

“It’s also expensive to live in those areas of the country and as we know the economy has really been in trouble lately,” Johnson said. “Any area of the country where costs of living are high, you may see an increase in stress.”

Valerie Shuford, a stay-at-home mother in Northern Virginia, said she feels stressed two or three days a month, and cited finances as a factor.

“With financial pressures in this region there are definitely times where you don’t feel like you can fully participate in everything because everything is so costly,” Shuford said.

“The line would come when people are starting to, as they do, report symptoms that are unpleasant such as irritability or anxiety or fatigue or depression,” Haight said.

Nearly half of D.C. residents surveyed admitted to feeling irritable or angry as a result of stress at least once in the past month in addition to more than one third responding that they felt either anxious, fatigued or depressed.

Time and willpower were the greatest barriers to reducing stress levels of Washingtonians.

“If you hold the belief that time is a problem, then that can actually inhibit your ability to think about ways to overcome the time pressure … sort of like a self-fulfilling prophecy,” Haight said. “If you tend to believe that you have no time, then you don’t try to make time and you don’t try to do things differently.”

Though the causes and cures for stress differ greatly between individuals, steady increases nationally over the past five years have led the APA to suggest in its report that America is “on the verge of a stress-induced public health crisis.”

But whatever you do, don’t stress about it.