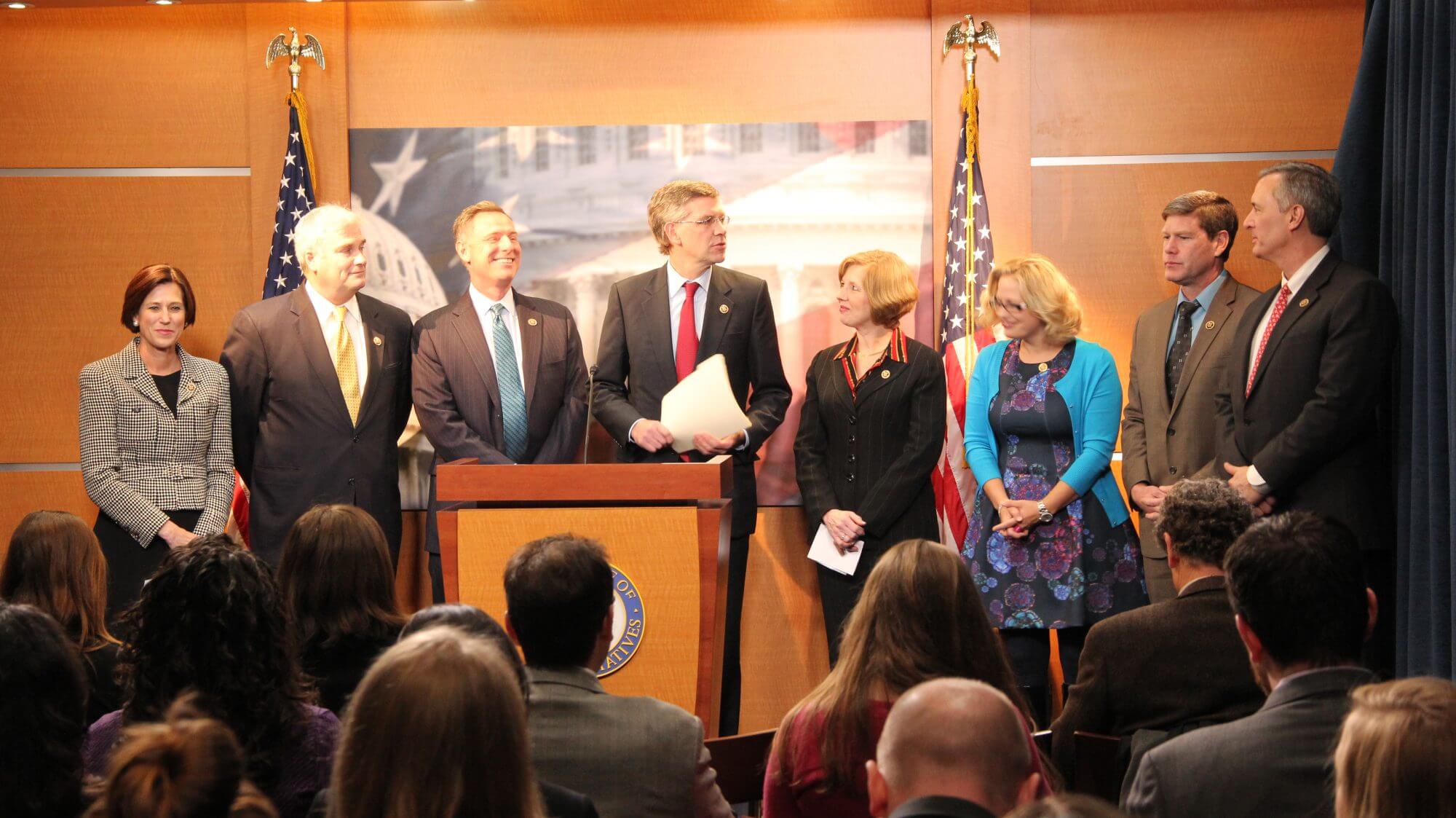 WASHINGTON—Rep. Erik Paulsen, R-Minn., Wednesday said one of the best ways to protect American manufacturers and support innovation is to repeal the medical device tax, which critics say is harming job growth.

At a press conference on Wednesday, a bipartisan group representing more than 250 members of the House called for immediate repeal of the the tax in the new Congress in order to protect jobs and support innovation.

Rep. Erik Paulsen fields a reporter’s question after the press conference, which took place in the House of Representatives. Photo by Astrid Goh/MNS

The bill has strong bipartisan support across the spectrum with 254 cosponsors, including 27 Democrats. The House has passed this bill at several different times. With the new Congress and GOP leadership in place, Paulsen is confident the bill will pass, perhaps even in the first quarter.

The proposed legislation repeals the 2.3 percent excise tax on sales of all medical devices. Written in the Affordable Care Act, the tax has been in effect since Jan. 1, 2013. Paulsen introduced similar legislation in the 113th Congress, which the House passed on two different occasions but was it was not brought for a Senate vote.

Rep. Ron Kind, D-Wis., the bill’s coauthor, said this is one of many changes that need to be made in the healthcare system.

“I’m one of those who did support the Affordable Care Act and when I did I did not believing it was a perfect solution to the complexity of the healthcare systems that we have,” Kind said. “As we move forward there are going to be need for adjustment and changes.”

Kind said the medical device tax is not only affecting profitable homegrown manufacturing jobs but also jobs in small businesses and startups.

“It does not make sense to single out one industry manufacturing to increase tax,” Kind said.

Congress needs to find offsets to pay for $30 billion over 10 years in a $2.9 trillion healthcare economy if the bill has a chance at becoming law. Kind said he is confident that the House and Senate will be able to find the long-term savings to fund the repeal.

Rep. Susan Brooks, R-Ind. said the current tax is detrimental to the hundreds and thousands of jobs in the life and science industry in Indiana. The state is the largest of U.S. exporter of medical devices.

“This tax stifles innovation which ultimately affects people’s health,” Brooks said. “It is not allowing these companies to bring new devices to help save lives and to make lives better for the American people.”

Democratic lawmakers from device-heavy states such as Sens. Elizabeth Warren and Ed Markey of Massachusetts, and Sens. Amy Klobuchar and Al Franken of Minnesota, have also shown support for the repeal.

“Sen. Franken is committed to supporting Minnesota’s medical device industry,” said Michael Stein, Franken’s press secretary. “He has long fought to ensure that our medical device companies can continue to innovate and develop new, life-saving technologies, which requires the repeal of this current tax.”